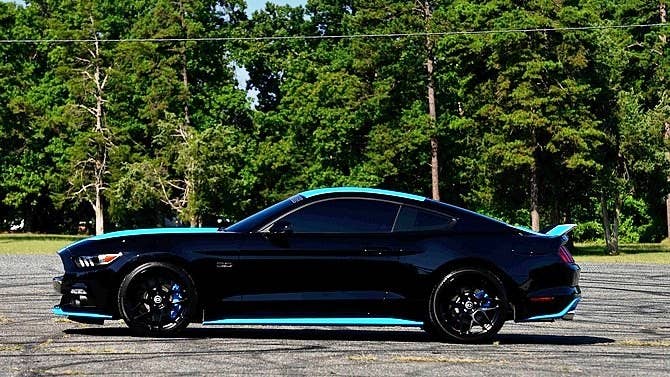 Petty’s Garage, the custom car-building arm owned by NASCAR there-will-never-be-another-legend-like-him Richard Petty, has been modifying cars for a lot longer than you think, with the latest models being Ford Mustangs, appropriate since Petty’s two NASCAR Sprint Cup entries are Ford Fusions.

Or that’s what they say on the front: If you are savvy enough to find your way to TheDrive.com, you know that the parts shared by the Fusion and NASCAR Fords are, shall we say, minimal.

But it still ties Petty to Ford, and we had the chance to sample a Petty Garage Mustang for a few laps at the Thermal Club, the private race track outside Palm Springs, California.

The car, white with a Petty Blue stripe down the center, started as a Ford Mustang GT, with its 5.0-liter V8 mated to a supercharger – the Pettys-Garage.com site says it’s a TVS 2300 blower from Magnuson, but paperwork in the glove compartment we probably weren’t supposed to be snooping around in seemed to suggest it might have come straight from Art Whipple. The Petty representatives there told us this was the Level Three model, and the engine was pumping out 825 horsepower.

The regular supercharged 5.0 is billed at 670 horsepower, with an upgrade that brings it to 727 horses as a Level Two. There are plenty of other upgrades, inside the cockpit and under the body – some work better than others. Build quality, trim and detail work appear very nicely executed.

We didn’t have time for a full shakedown, but here are some impressions: The engine is a torque monster, capable of a nice tire squeak in fifth gear. Assuming you can find fifth gear: The transmission works great through fourth (though third and fourth ratios only feel like a few teeth apart), but going into fifth takes both finesse and muscle. Surely that’s fixable.

Brakes are excellent – linear with no fade. Suspension is appropriately stiff, but seemed to respond a bit differently in every corner. Petty employees said they had no time to make adjustments for this particular track – indeed, the amount of camber in the front suggested a different type of track setup entirely. Handling wasn’t scary; we just needed more time to feel out the limits.

As for power, our calibrated asses required that we pull one of the Petty guys aside and say, “Fast, but that isn’t 825 horsepower.” At which point he agreed that this engine had been detuned a bit because the car would be driven by some track rookies. He said mid- to high-700s, we said high-600s, and agreed to disagree.

Bottom line, though, is the bottom line: They said that as it sat, the car costs $70,000. Which, if delivered as an 825-horse car, is a steal. And yes, Richard Petty is very, very involved in Petty Garage cars. “I got a text from him five minutes ago,” said one of his representatives, holding up his phone.

Oh, one more thing: When we went to visit King Richard in Level Cross, North Carolina, circa 1985, he was driving a way-ahead-of-its-time flat-black Pontiac Firebird. Black wheels, black everything, monster motor. Sinister. What’s he drive now? A Ford Taurus SHO. Black. And no, it isn’t stock.