A million-dollar masterpiece named “Vicious” is burning up the floor at SEMA. 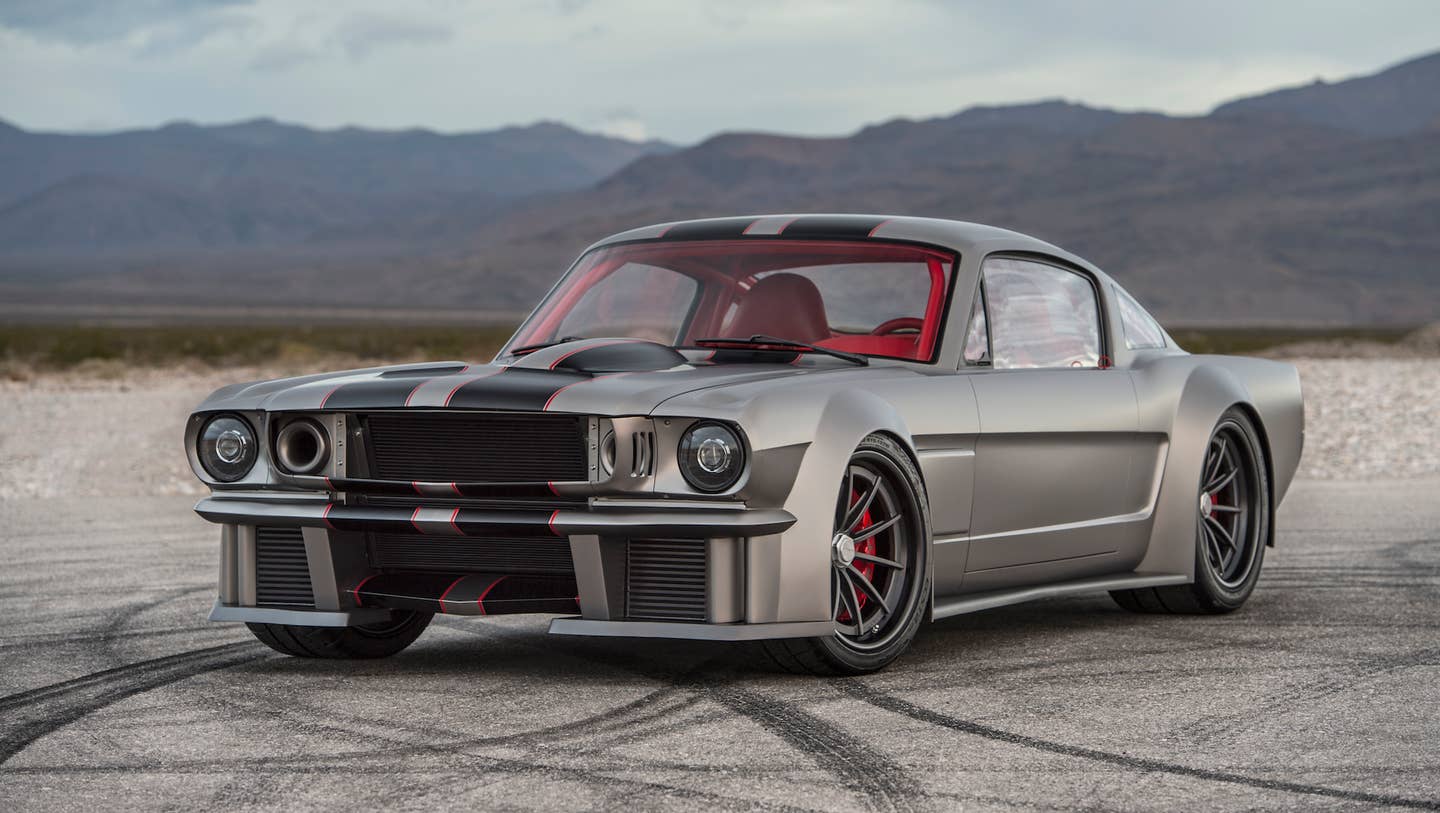 You’re looking at one of the most extreme, track-focused Mustangs to grace the SEMA show. This pony car entered Timeless Kustoms California garage as a 1965 Ford Mustang coupe, and emerged nine months later as a foaming-at-the-mouth fastback stallion with 1,000 horsepower and equal pound-feet of twist.

Commissioned by owner Chris Marechal, this is the second 1965 Mustang fastback he’s ordered from Timeless Kustoms. The first features a Coyote engine with a Magnuson supercharger, good for 650 hp, but why settle for three-digit horsepower when you can have four? Timeless Kustoms owner Jason Pecikonis readily accepted the challenging build.

“This car was built to show what you can do with really amazing parts,” Pecikonis told The Drive. “Vicious has what may sound like a lot of horsepower, but we carefully selected all the components used because they were designed for that kind of power. We built with that number in mind, so everything had to be supremely capable.”

Pecikonis and his Timeless crew started by slicing off the original roof and grafting on a custom fastback from the sheetmetal wizards at Dynacorn. The body was mounted on a custom Art Morrison chassis with a Corvette suspension, using C7 front clips, an independent rear, and Ridetech Triple Adjustable coilovers.

“Under the hood, we started with a Ford racing 350GT motor that we took apart and re-did, adding little tweaks like Manley rods and pistons. That 5.1-liter has a Magnuson MP2300 TVS supercharger and twin 76mm Precision turbos,” Pecikonis said. That’s mated to a EMCO Gears CG46 sequential six-speed with a Centerforce DYAD clutch. The exhaust is a full MagnaFlow system that pokes out of the middle of the custom rear diffuser.

The cost of the full build was “substantial,” Pecikonis laughed. “About a million dollars. The trickiest part was getting all the plumbing in the car. Every system has it’s own cooler, whether it’s water or air, everything needs to be cooled. We designed this car to be able to do max effort on the track for a 30-lap stint, so we need to make sure the car can withstand getting heat-soaked over and over.”

If you’re pushing the car to the max for that long, you’ll need legit fuel delivery. Aeromotive’s race system, with dual universal Eliminator pumps and 7/8th fuel lines—a system which can sustain up to 2,000 horsepower—was installed. To get Vicious to a safe halt, Brembo spec’d enormous 15.5-inch carbon ceramic rotors with 6-piston calipers up front and 4-pistons in the rear. For wheels, Vicious sits on 19-inch centerlock forged GT3C wheels from Forgeline with Kumho V720 tires.

The end of the build was a frantic push. “We literally finished the day before we came to SEMA,” Pecikonis said. “It still hasn’t had a shakedown cruise yet, and it’ll be on the dyno next week. All next season, Chris wants to take it to the track, so I can’t wait for that. I really want to see it run Laguna Seca.” In case you’re wondering, Vicious does have full electronic stability control and ABS—but all that can all be switched off for those who can handle the beast.

Ask what Marechal said when he first saw his completed Mustang, and Pecikonis’s reply is swift: “Man, he nearly cried.” Understandable, since the adulations keep pouring in. The car just won Best Domestic forGran Turismo, and if it wins best overall, it’ll be placed into a future version of the game. Fingers crossed.

Below, some ridiculously awesome photos of Vicious after completion. If you want to see some videos from the build process, head to Timeless Kustom’s YouTube page.