The Sad Life, and Sadder Death, of Kat Teasdale

At one time the top Canadian female racer, she will be remembered for her determination, on and off the track. 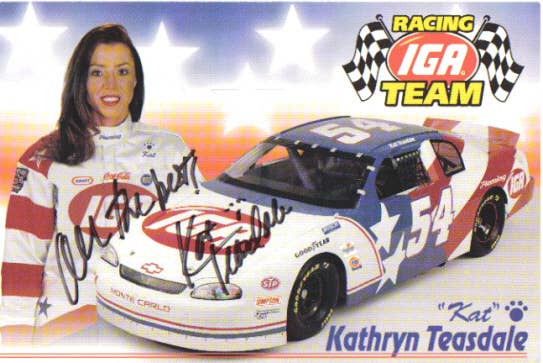 Like the professional he is, Andy Pilgrim, one of the best road racers in the country, devoted his full attention to his job last Sunday, co-driving the Black Swan Racing Porsche 911 GT3 R in the IMSA WeatherTech Sahlen’s Six Hours at the Glen endurance race.

But he couldn’t help, for a moment, think of his friend and former co-driver, Kat Teasdale. “Kat and I drove together for Pontiac in the IMSA Firehawk series,” Pilgrim recalled. “I knew Kat as a talented and fearless driver. She had great enthusiasm for racing, an upbeat and positive personality and loved to laugh. She was also a very talented athlete.  The word ‘driven,’ no pun intended, probably applied more to Kat than anyone else I ever met.”

Kat Teasdale, once one of the most promising female race car drivers in North America, died last month. The obituary in her hometown paper, the Toronto Star, was ominous: She “died unexpectedly after a long struggle with physical and mental health issues.” The family asked that in lieu of flowers, donations be made to the Canadian Mental Health Association.

Teasdale was born on Christmas day, 1964. Her love for competition and her athletic talent was evident early on as she competed in downhill skiing, but a knee injury ended dreams of a professional career, and she turned to motorsports in 1988. She was an aggressive driver, but even more aggressive away from track as she sought sponsors and rides – not easy today for a female driver, even harder in the 1980s and 1990s.

She managed to get a ride in the NASCAR Xfinity series, as well as Indy Lights, the Atlantic series, Formula 2000, Trans Am, CASCAR – Canada’s version of NASCAR – the Players GM series, and she even competed in the Rolex 24 at Daytona in 1994 driving a Porsche 968.

But the struggle for money to compete, as with so many talented drivers, overshadowed everything. “I’m good,” she said in a 1992 magazine profile. “I deserve to be on the racetrack.” Deals that looked like the answer to her prayers one day, like a connection to clothing manufacturer Hugo Boss, crumbled the next.

“She was the most determined person I ever met,” said Indy Lights team owner Brian Stewart, quoted in a story by Norris McDonald, the automotive editor for the Toronto Star, and a friend of Teasdale’s for years. Stewart has fielded cars for drivers including Paul Tracy, Jaques Lazier, Cristiano da Matta, Bryan Herta, Arie Luyendyk Jr. and Al Unser III, and Kat Teasdale.

Teasdale retired from racing in 1998, and the stories then about it cited “ill health.” Indeed, she just disappeared from the motorsports scene. What happened?

McDonald’s story in the Star explains: “She suffered from Lyme Disease and it wrecked – wrecked – much of the latter part of her life. Other than what causes it, a tick bite, the medical profession (particularly the Canadian medical profession) still does not know much about Lyme Disease. It is frequently misunderstood and/or misdiagnosed and the people suffering from it are also frequently misunderstood. What Kat told me about her torture will remain between us. It was told in confidence.”

Said a profile written about her in 1996: “She is looking to move up through the ladder of NASCAR racing in the next few years until she reaches the pinnacle of success, the Winston Cup series. When she makes it, it will be because of the hard work, courage, and discipline that she displays whenever she gets behind the wheel of a race car.”

Sad she never got the chance. Kathryn “Kat” Teasdale was 51.