Joey Logano caught the ire of Truex Jr. after moving him out of the way to win last weekend’s NASCAR playoff race at Martinsville. 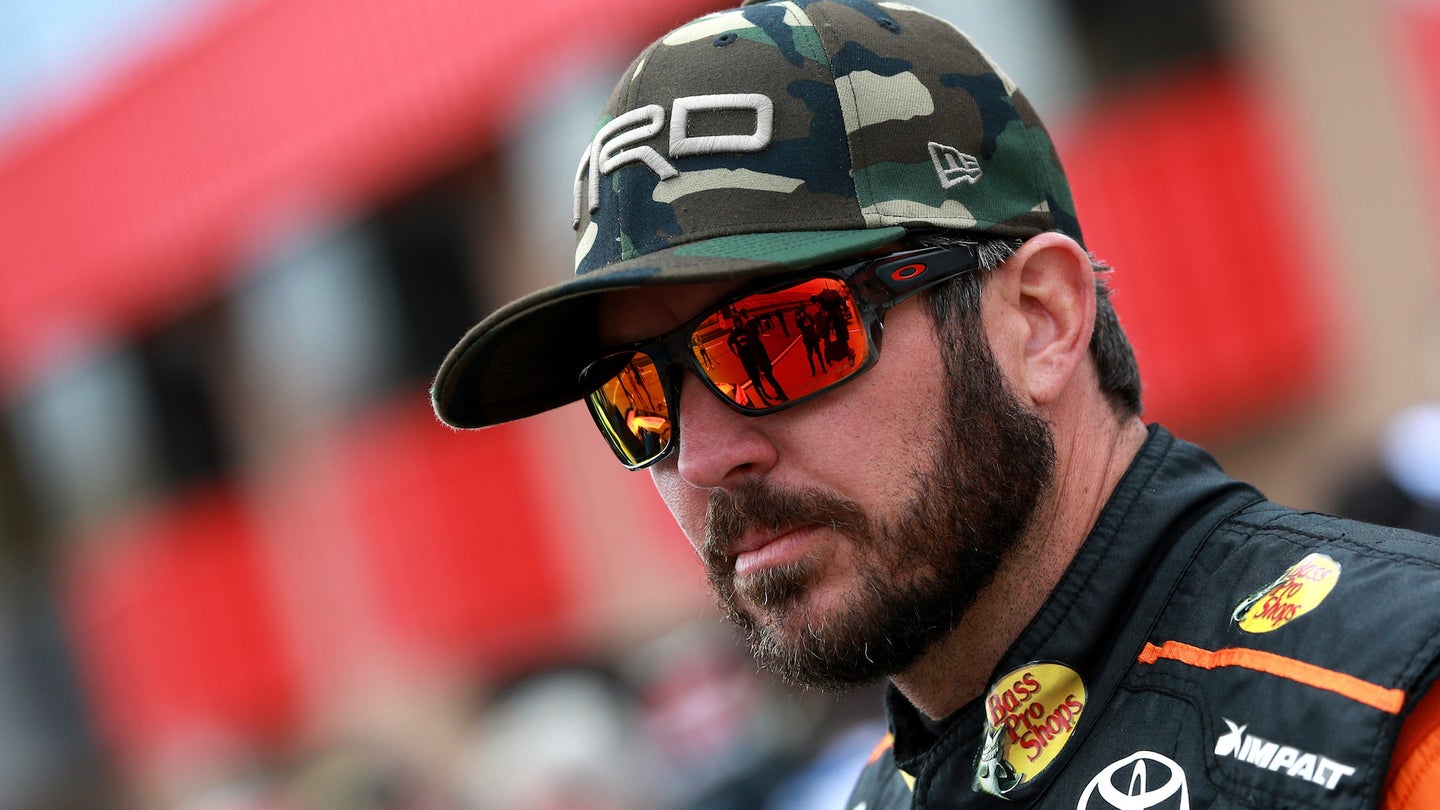 Hopes of a 2018 Monster Energy NASCAR Cup Series championship still are alive for eight drivers. Aside from the desire to be a series champion for the second consecutive year, Martin Truex Jr. has a little extra motivation to win it all—keeping Joey Logano from winning the championship.

"He won the battle, but he's not going to win the damn war," Truex Jr. said on Oct. 28 after Logano won the First Data 500 at Martinsville Speedway in Virginia. "I'm just not going to let him win [the championship]. I'm going to win it.”

Truex Jr. took the lead from Logano on the final lap of the race, but the two made contact later on and the advantage fell in Logano's favor—considered a dirty move by Truex Jr.'s No. 78 Furniture Row Racing team.

"I took the lead from him fair and square, and then, he gave me a cheap shot,” Truex Jr. said. "It's a cheap win. I hope he's proud of himself. I'll remember that if he's in front of me coming to the checkered flag."

Logano’s race win at Martinsville guaranteed his advancement to the four-driver championship round of the playoffs in the season finale at Homestead-Miami Speedway on Nov. 18. Truex Jr. and the other six remaining playoff drivers have two more races to claim their championship four berths.

The move Logano pulled on Truex Jr. to retake his lead is referred to as a “bump and run” in the NASCAR world. It’s completely within the rules and is fairly commonplace on short tracks like Martinsville. It's a move that fans and competitors love or hate, seemingly depending on which drivers are involved, and more specifically, which driver is on the giving end and which is on the receiving end of the contact.

For some, the line between acceptable and unacceptable is dependent on whether or not the driver on the receiving end is wrecked out, which Truex Jr. was not. Instead, he finished third, also being passed by Denny Hamlin.

"You know, we didn’t wreck each other,” Logano said. "We bumped into each other a lot, and that is what this sport was built on. I know a lot of fans out there aren’t too happy about it, but it is racing, and that is what NASCAR is about and what stock car racing is.”

Even though the incident improved Hamlin’s finishing position by one, he was still wishing for a bigger clash in hopes of advancing further up the order.

"I knew it was coming, but I just hoped it would be a little more dramatic,” Hamlin said.

The incident on the final lap at Martinsville is the second in which Logano has been on the giving end in recent years. Logano made contact to get around Matt Kenseth during a race at Kansas Speedway in 2015. The big difference in that incident — Kenseth wrecked, or at the very least, spun. Back then, Logano felt Kenseth was blocking him excessively, and therefore, the contact was called for. Kenseth didn’t see it that way, though.

Kenseth wrecked at Talladega Superspeedway in Alabama a week later and was eliminated from that season’s playoffs. Kenseth, then, got his revenge at none other than Martinsville. After wrecking once more, he returned to the track nine laps down with the intent of wrecking Logano, taking him out of the race. That mission was completed, and Kenseth was suspended by NASCAR from two of the final three races of the season for his retaliatory actions.

The window of opportunity for Truex Jr. to retaliate is a narrow one; so narrow, in fact, that he has only one race to pull it off. Retaliation would be meaningless in either of the next two races at Texas Motor Speedway or ISM Raceway near Phoenix because Logano’s already locked into the championship four at Homestead. Any revenge would need to come at Homestead-Miami.

If Truex Jr. is eliminated from the playoffs for Homestead, he’ll have nothing to lose in the final race of the season. But if Truex Jr. is still in the game, certainly, he’ll be more focused on the championship than retaliating against Logano. Maybe the best way for Truex Jr. to get back at Logano would be repeating as NASCAR Cup Series champion.