Logano won his second NASCAR Cup Series race of 2018 but his first at Martinsville in the First Data 500. 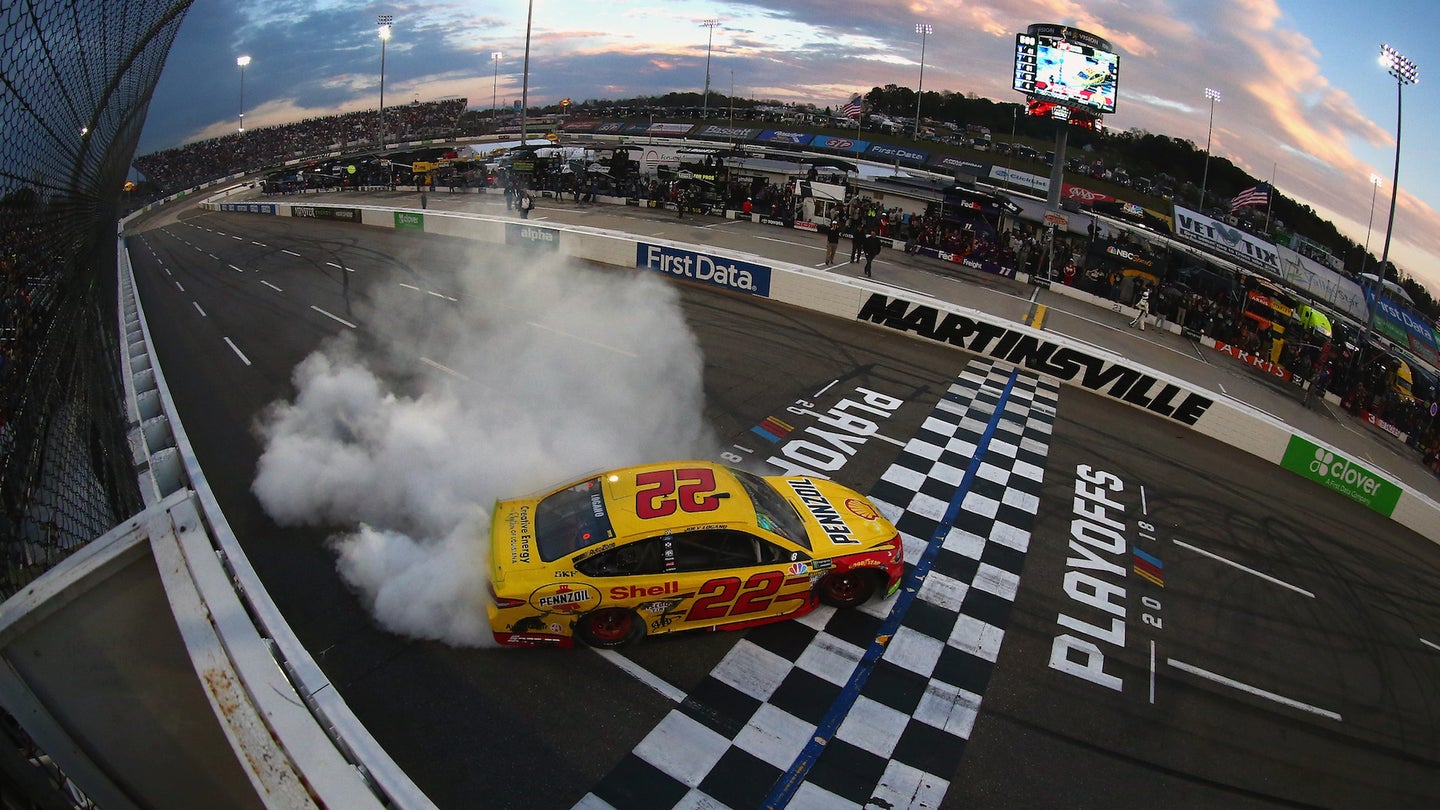 On Sunday, Team Penske's Joey Logano punched his ticket into the NASCAR Cup Series championship round of four to be hosted at Homestead-Miami Speedway next month with his win of the First Data 500 at Martinsville Speedway. It was Logano’s second win of the season, but his first at Martinsville.

“That was just a hard, great race—NASCAR racing at its finest,” Logano said. “It was a lot of bumper-banging towards the end and a hard race. You know, we didn’t wreck each other. We bumped into each other a lot and that is what this sport was built on. I know a lot of fans out there aren’t too happy about it, but it is racing, and that is what NASCAR is about and what stock car racing is. I am just glad we finally won here. It has been so long and we have had so many chances, and it feels like sweet redemption after everything that has happened here.”

Logano and fellow championship frontrunner Martin Truex Jr. battled side-by-side for the lead on the final lap. Truex Jr. took the top spot from Logano’s Penske teammate, Brad Keselowski, within the last 10 trips around the 0.526-mile short track. Truex Jr. negotiated the lead from Logano in Turn 3 on the last lap, but after the two drivers made contact, Logano made his final move before Denny Hamlin also got by Truex Jr.

Hamlin, who was eliminated from the playoffs in the first round, and Truex Jr. finished second and third while Keselowski wound up fifth. Truex Jr. started the race in the back because of a failed inspection Sunday morning. Keselowski also started the race from the rear due to an unapproved change to his car prior to the race.

“We had a good run there,” Keselowski said. “We were really good on the short runs, but we struggled a little bit on the long runs, and it just didn’t end up playing out there for us at the end. It is good to see Joey get to victory lane. Happy for Team Penske.”

Hamlin and Logano were stage winners. Hamlin was up front when the first stage ended on Lap 130. His Joe Gibbs Racing teammate and playoff driver, Kyle Busch, dominated the stage after starting on the pole, leading 100 laps before relinquishing his position late in the round.

Hamlin took the lead from his teammate twice in the first 130 laps, first on Lap 31. Busch got out of the pits first during a Lap 43 caution to retake the lead. On Lap 116, Hamlin maneuvered to the front of the pack to eventually take Stage 1.

Logano was up front at Lap 260 to clinch crucial stage points. He was first off pit road during the caution between the first two stages and led throughout the second stage that ran caution free.

After Truex Jr. raced up to the top-10 by Lap 120, and for most of the remainder of the race, all eight playoff drivers ran inside or near the top-10. At the end of the contest, two playoff drivers were outside the top-10. Aric Almirola was 11th, and his Stewart-Haas Racing teammate Clint Bowyer wound up 21st after a late-race incident with Jimmie Johnson.

Playoff driver Kevin Harvick temporarily fell off the lead lap, although he was inside the top-15 of the running order, in the final moments of the second stage. During the caution at the end of that stage, however, he was awarded the free pass back onto the lead lap. He was 10th at the checkered flag.

“As the sun started to go down, our speed was definitely better,” Harvick said. “Everybody just kind of hung in there on our Busch Beer Ford. Our goal is always to come here and kind of just not defeat ourselves with a horrible finish. We had a good day. A decent day. Not a great day. Lost a few spots there at the end racing [Ryan] Newman. His car gets as wide as his neck there sometimes. You know, it is Martinsville and everybody is racing hard, and we wound up finishing 10th and we go to Texas and, hopefully, have a good day.”

Keselowski took the lead from Logano on Lap 419 and ran up front until Logano reassumed the position by getting off pit road first during the eighth and final caution of the race that came out on Lap 457.

UP NEXT: The Monster Energy NASCAR Cup Series continues the round of eight, or third round, of its 2018 playoffs at Texas Motor Speedway on Nov. 4. The AAA Texas 500 event will kick off the first of three-consecutive NASCAR tripleheader weekends to close out the seasons for all three national series. Championship contenders Kevin Harvick and Kyle Busch were victorious in the two most recent races at Texas. Harvick is the defending winner of the fall race there, while Busch won at TMS earlier this year.