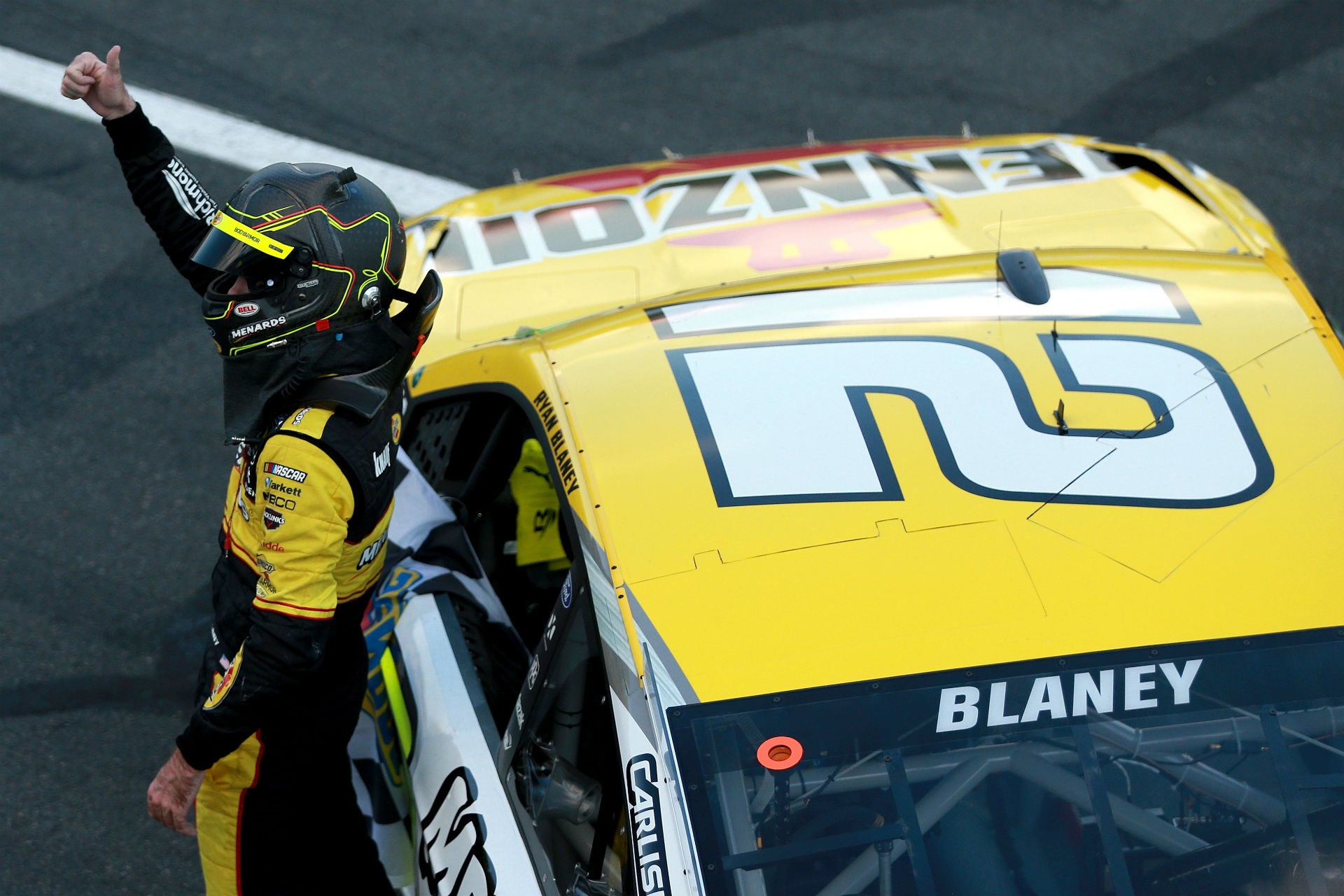 Ryan Blaney passed the spinning Jimmie Johnson and Martin Truex Jr. on the last lap of Sunday's Bank of America Roval 400 for his second-career NASCAR Cup Series win and his first of 2018.

"You hate to see two of the best cars wreck," Blaney said. "You just try to capitalize on the circumstances given to you. We were in the right spot at the right time. We put ourselves in a good spot. I'm just happy to not only win but advance. Can't think of a better group of guys to be with, and just looking forward to the next round."

Blaney’s win cemented his advancement to the second round of the playoffs, beginning Oct. 7 at Dover International Speedway in Delaware.

Larson took the lead from pole-sitter Kurt Busch on Lap 7 and ran up front for the remaining laps of the first 25-lap stage. Then, he maintained his lead by staying out during the caution between the first two stages.

Larson, Kyle Busch, and Martin Truex Jr. made their initial pit stops on Laps 36 and 37, planning to run the complete race distance with only two pit stops. After others cycled through pit stops over the course of the remaining laps of the second stage, Blaney claimed his stage win at Lap 50.

More drivers pitted during the caution after the second stage concluded, cycling Larson back up to the lead and Busch was second. Truex was mired farther back after he and Brad Keselowski spun on Lap 49 and were charged with stop-and-go penalties for missing a chicane.

Aside from two cautions, one each at the end of each of the first two stages, the yellow flag waved only once in the first 50 laps for a single-car incident on Lap 14. The attrition rate got higher in the second half of the race, with the yellow flag waving five more times through the remainder of the event.

Larson gave up the race lead to pit during a Lap 69 caution. Busch and Truex Jr. also were among those who pitted. Keselowski stayed out and inherited the lead, while Larson raced back up to P2. Larson, though, didn’t close on Brad Keselowski, instead going into fuel conservation mode and trailing Keselowski by about 12 seconds with 15 laps remaining.

Keselowski, who started the race from the rear in a backup car, was the leader for a restart on Lap 103 of the 109-lap race, but he missed Turn 1 and hit a tire barrier. Several other frontrunners, including Kyle Larson and Kyle Busch, were collected.

“I guess it just comes down to us all being on old tires and not really knowing what to expect or how much grip these tires would actually have,” Busch lamented. “Just not having anything better to do than drive it off into a 90-degree corner and into a wall. That’s about all that happened; we all over-drove the corner, and that’s all there is to it.”

Larson was able to limp to a 25th-place finish. Keselowski and Busch were credited with 31st and 32nd, respectively.

Truex Jr. and Johnson got through that wreck to restart on the front row with three laps remaining. At the checkered flag, Johnson was eighth and Truex 14th.

Larson, Johnson, and Aric Almirola were tied in the points standings after the race. Larson and Almirola advanced to round two of the playoffs by virtue of a tiebreaker, both having finished higher in two of the first-round playoff races. Johnson, though, is out of the playoffs, despite being the only driver among the three to finish in the top-10 of Sunday’s race.

“I wish I wouldn’t have been so focused on a race win, and I could have transferred and kept my championship hopes alive, but we had such a good car and just one of those split-second decisions to race for the win instead of for the points, and it bit me,” Johnson said.

UP NEXT: The Monster Energy NASCAR Cup Series will begin its second round of the 2018 playoffs on Oct. 7 at Dover International Speedway in Delaware. Kyle Busch is the defending winner of the fall race at Dover, while another playoff driver, Kevin Harvick, is the most recent winner there, winning at DIS in May.