A first-turn scramble on the opening lap wasn't enough to break the reigning world champion's concentration. 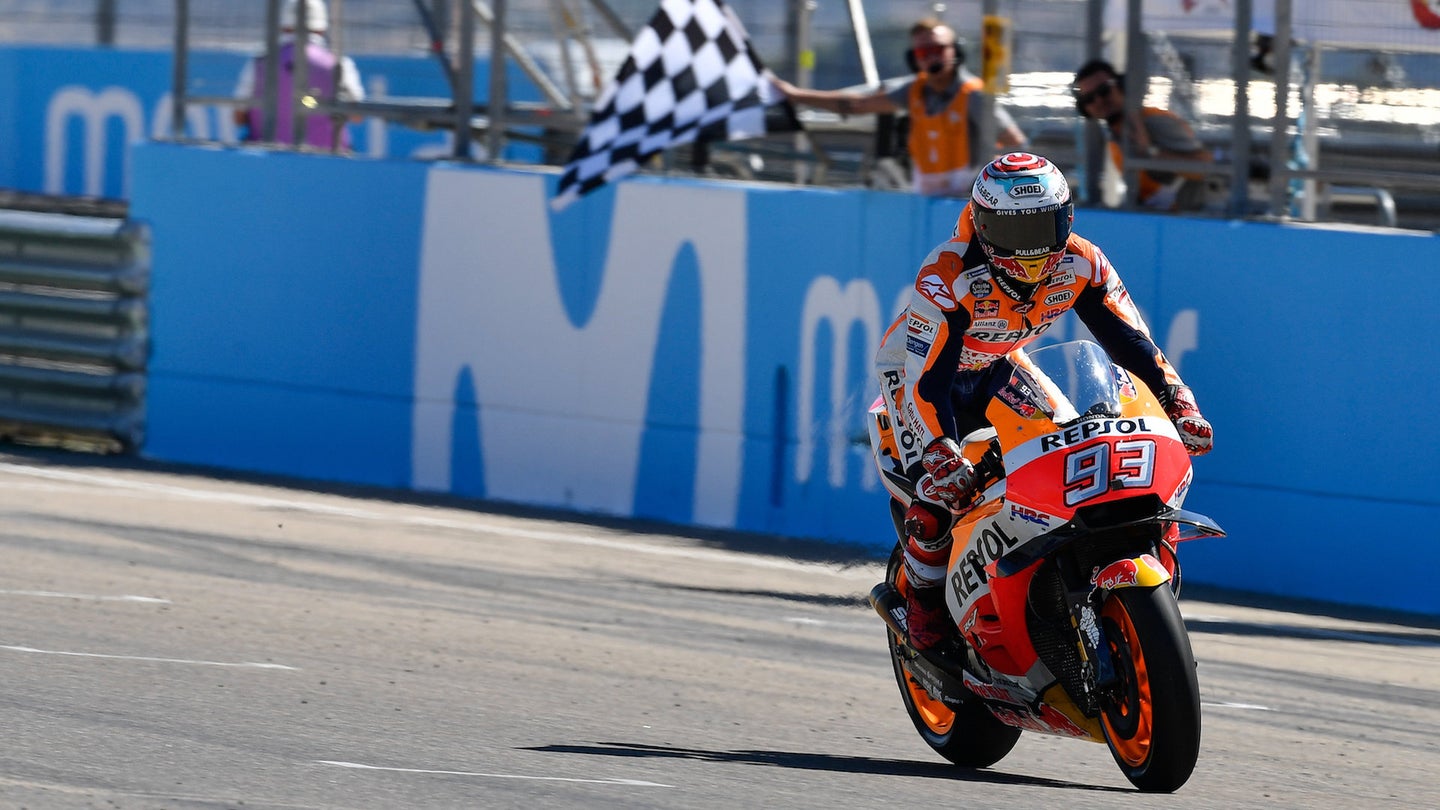 Marc Marquez rode a masterclass race at Sunday's MotoGP Grand Prix of Aragon, which helped him retain his place at the top of the 2018 championship standings. The Spaniard was able to beat the Ducati of Andrea Dovizioso who followed closely in second place, and the Suzuki of Andrea Iannone who delivered a spectacular third-place finish.

The race got off to a dramatic start as the series' top three riders blasted out of their grid spots, but ultimately only two of them would make it past the first corner. After diving too deep into Turn 1, Marquez and his archenemy (and future teammate) Jorge Lorenzo went wide and handed over the lead to the Dovizioso. But while Marquez was able to turn his Repsol Honda around and emerge from the run-off unscathed, Lorenzo high-sided while attempting to rejoin the racing surface and crashed in dramatic fashion. Later it was confirmed that the Spanish Ducati rider dislocated a toe as a result of his crash.

With Marquez out of the picture and Dovizioso at the lead, it was Iannone and teammate Alex Rins who bolted to the front along with Honda's Dani Pedrosa, Aprilia's Aleix Expargaro, and LCR Honda's Cal Crutchlow. The battle for the top five positions was a heated one throughout the race, and a charging Marquez only made things even hotter. Crutchlow eventually crashed out, but it was Marquez who held a tight grip on the tv cameras as he did everything he could to get back to the front and lead around his beloved MotorLand Aragon circuit.

The score-setting move came at Turn 5 in the closing stages of the race, as Marquez managed to get the best of Dovizioso's Ducati and hang on the pace long enough to see the chequered flag. At the end of the day, Marquez crossed the finish line with Dovizioso hot on his heels just 0.6 seconds behind, and Iannone a respectable 1.25 seconds behind his Italian compatriot.

Marquez continues to dominate the championship with 246 points, with Dovizioso in second place with 174 and Valentino Rossi in third with 159. The MotoGP fraternity now heads to the Chang International Circuit for the Thailand Grand Prix on Oct. 7.