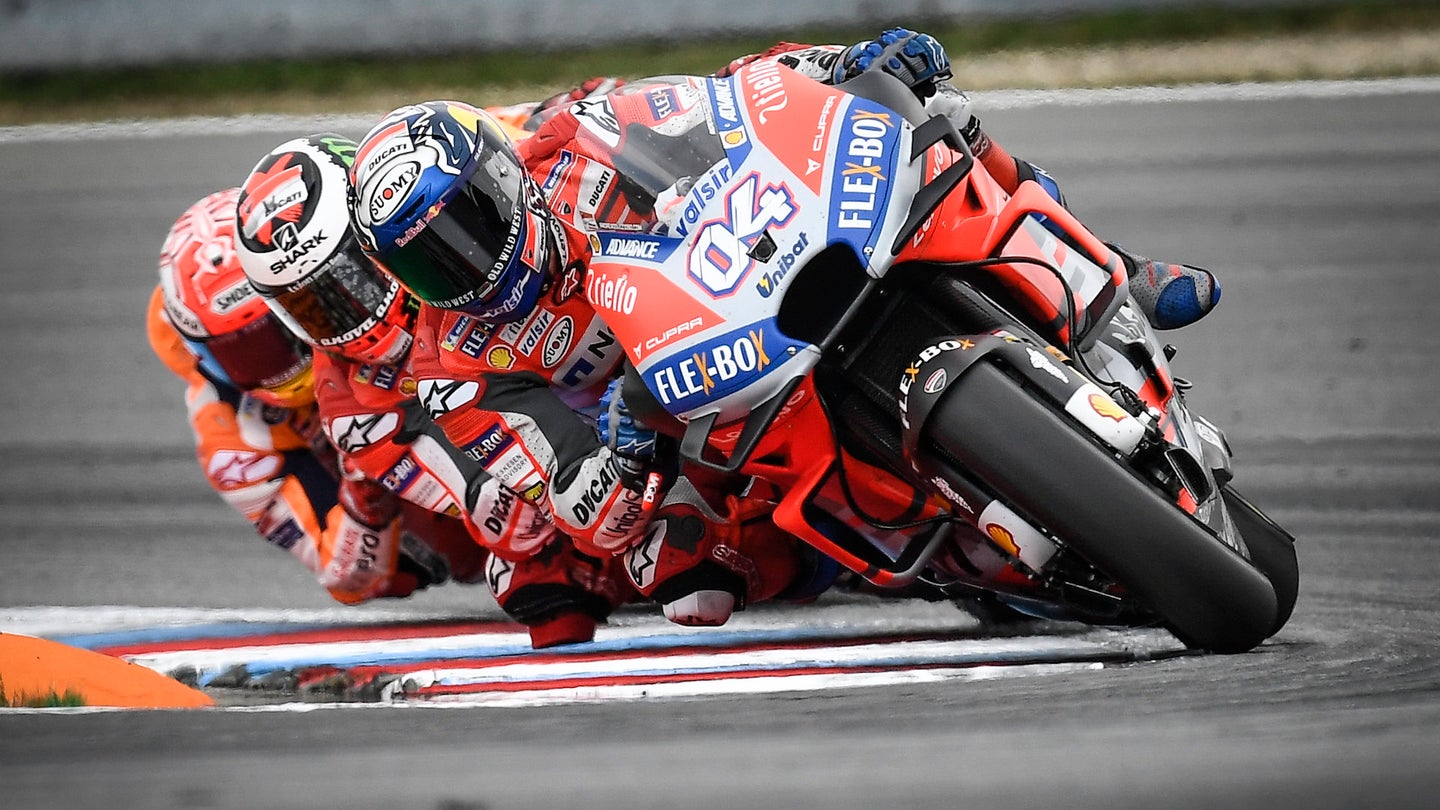 Andrea Dovizioso's ride to the top step of the podium at the Grand Prix of the Czech Republic wasn't only heroic, but the last stages of the race must've surely raised the blood pressure of the men and women of Ducati as they saw their two factory riders fight for the lead and Honda's Marc Marquez try to steal it from them.

The 21-lap race at the Brno Automodrom got off to a controversial start as Dovizioso jumped the start ahead of Valentino Rossi and Marquez, although it was "The Doctor" who had the fastest speed down the main straight and beat the field into Turn 1 as riders attempted to get through it cleanly. The stewards reviewed the footage of Dovizioso's start later on and deemed that "Dovi" did not gain an advantage and took no further action.

The field was just beginning to settle after the first-lap scramble when a TV shot that followed the race leaders picked up a big cloud of dirt being kicked into the air. The dramatic scene was caused by a three-bike collision that involved Yamaha's Maverick Vinales, HRC's Stefan Bradl, and KTM's Bradley Smith at the end of lap one. Thankfully, despite the dramatic crash, no one was hurt and Smith was able to ride to the pits but retired due to heavy mechanical damage.

The race continued without much action at the front and middle of the pack due to abnormally high track temperatures, which were accelerating tire wear and causing riders to lap the 3.35-mile track about a second slower than yesterday's qualifying pace. At the front, Rossi's medium front tire gave up and forced the famous Italian to drop back to fifth place, while the rest of the top four riders continued on their medium compound front and rear tires.

The closing stages saw Lorenzo apply enormous pressure on his teammate Dovizioso for the lead of the race, but the Italian never quivered and placed both tires wherever it was necessary to defend his position from the championship-winning Spaniard. Several times Lorenzo lunged to the inside, once coming close to pass both Marquez and Dovizioso at the same time, but would ultimately run wide on the second of the esses and lose the position he held briefly.

“I’m so happy,” said Dovizioso. “It was really difficult. When you see on the pitboard ‘Group of 3’ and ‘Jorge and Marc,’ it’s not good!"

“I’m happy with the way I managed that, also because we were fighting with the grip. So, it wasn’t just about speed, but speed and the sliding.”

Dovizioso celebrated ecstatically on victory lane after clinching his second victory of the year and performing some damage control on the championship standings. The Italian currently sits third in the championship with 113 points, Rossi in second with 132, and Marquez with 181 points as they head to the Red Bull Ring for next weekend's Grand Prix of Austria.