Driving The 1991 NSX: A Reminder of When Life Was Fresh and Still Held Promise

The new NSX is here. We drove the old one to see if that makes us feel something, anything, the way we used to back when we had hope. 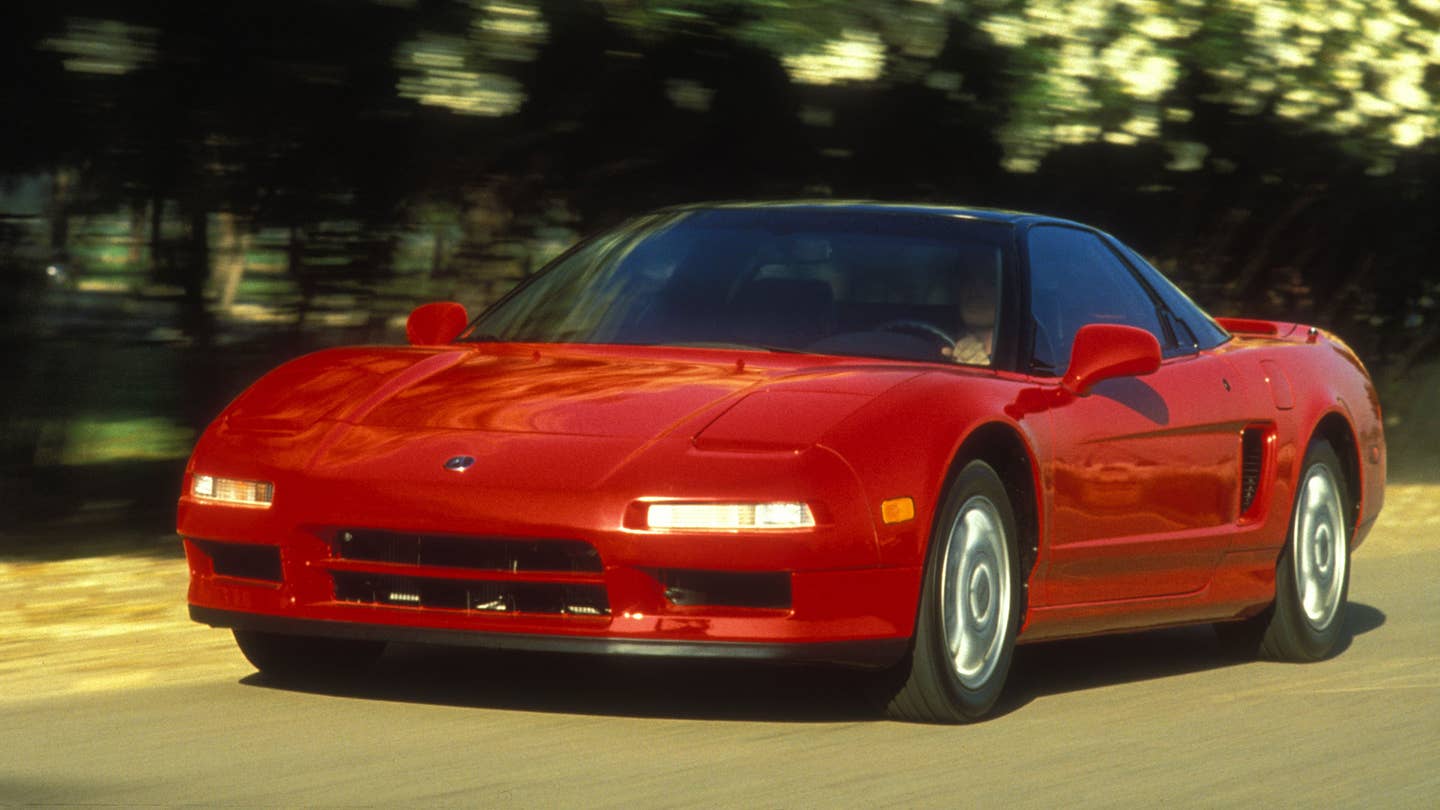 Back in 1990, driving a top-flight sports car was a brawl, 270 horsepower was a lot, you still thought you had most of your life ahead of you, and Acura wasn’t considered a maker of exotics any more than you considered yourself a failure waiting to happen. But times change—the old NSX is a classic now, considered as hard an act to follow as your life is now considered a dull and insignificant footnote. So when we had a chance to drive a pristine example of Acura’s legendary "tame supercar," we jumped at the chance to see if it was still the car we loved back when we still had love to give.

To appreciate what an accomplishment the NSX was for its time, and what an utter washout you've since become, you have to understand the era. Picture it: Acura is known as a manufacturer of high-quality cars but nothing that will shock the world, and you’re a young professional, bright-eyed, eager, energetic, nowhere to go but up; if someone told you then that Acura was going to build a mid-engined exotic with titanium con-rods and instantly legendary handling, and also that your career and personal life will gutter and die just a few years down the road, would you have believed it?

Well, believe it. The NSX has secured a place in the pantheon, whereas damn, man, just look at you. Whathappened to you? You're not so old that your torso should look like an worn sock full of chicken fat. Anyway, there's a very, very important question to consider: Is it possible to recapture past glory? Or even to just get back to a time when getting out of bed and into the shower wasn't a soul-crushing ordeal?

Those questions all but disappeared when we got a chance to drive a nearly pristine example of the classic NSX, an 87,000-mile 1991 Formula Red coupe that’s spent its entire life in Atlanta being well maintained, instead of spending its entire life going from one failure to the other, like some people. The NSX still looks good for being 25 years old...good Christ, 1991 was twenty-five years ago. Twenty-five years, and a glance in the mirror shows you "maintenance" wasn't exactly your first priority for at least twenty of them. Remember: in 1991 Ferrari’s main offering was the relatively tepid and unloved 348, entertainment was C&C Music Factory and Fresh Prince of Bel Air, you were in the first stages of a relatively tepid and loveless marriage to Cheryl, and Jordan was the NBA's MVP. The NSX was a revelation—a fast, comfortable supercar you could drive all day, every day, for the rest of your life. The future was here, and it looked great. Deceptively great.

Fast-forward, with a sickening lurch, to the present day, the winds of time tearing thousands of pages off the symbolic calendar—pages commemorating a lot less personal history than you'd think. What have you really done with that time except drift through it, gaining weight and losing self-respect? You divorced Cheryl for Sarah, gave her the last few good years of your life and then half of the worst, then when Sarah moved on you found Tracy, who only just left you as a hollow, gutted shell in the wake of her move to Sacramento. That said, the NSX still looks damn good, a classic shape from the pop-up headlights down to the formed-in spoiler risers melding seamlessly into the aluminum body. The whole package works just as well in today's era, when Will Smith's genderfluid son is a spokesmodel, Ferrari is all the way up to the lovely 458, and no one really knows what the top pop song is anymore because they all kind of remind everyone of other songs that they liked better from a time when they still liked themselves at all.

The NSX drives beautifully, too. Our example popped out of gear a couple times (this might be a sign the transmission’s snap ring, one of the NSX’s few weak points, is about to let go; Christ, what you'd give to have so few weak points—these days you're a connect-the-dots of weak points, even on days you leave the house) but driving it was a joy. It corners sharply, aided by unbelievably tactile manual steering, with more body roll than one has come to expect from contemporary supercars—but then, expectations are so high these days, everyone wants more from you than you have to give and they offer in return so much less than you could have even expected—but still the limits are insanely high, especially considering how those pre-Clinton, pre-waking-up-with-suicidal-thoughts-every-day 15/16-inch front and rear wheels limit the available rubber. It’s also worth noting that, while 270 horsepower is Camry territory these days, the NSX only weighs about 3,000 pounds, so it achieves a five-second 0-60 time. That isn’t as impressive as it was in 1991, but numbers were different back then. Hell, a $55,000 annual salary was positively respectable in 1991.

The interior is, of course, dated, which at first can make you feel a little smug that the car has also not aged all that well. But then you feel ridiculous for feeling superior to a sports car, especially one this good, one that so clearly has you beat. Big slabs of nineties plastic aside, this is a seriously comfortable cabin—the NSX’s seats have been equaled, but never surpassed; it's fair to say chair technology and your life both hit their zenith in the mid-nineties, goatee or no goatee. God, we’re not going to compare fashion, are we? The NSX is going to win that every time. If there's a classic from this era, the NSX is it, and you aren't.

The NSX is an ageless, amazing icon, which again, unlike you, truly set a new standard. It looks better with each passing year, whereas hindsight in your case only serves to highlight every single misstep you've made, every incremental, minor decision resolving at this distance, with the aid of the perspective that so much pain and regret grants you, into a huge downward curve, everything you once thought was so important and loomed so large getting smaller as it falls away into the distance, losing color, losing clarity, graying and dissolving and succumbing to inertia and entropy until you’re lost into your own past, which appears even to you as nothing but a colorless, soundless, numb void.

Those same years have given a wonderful grace to the NSX; it almost seems unfair that age doesn't give sports cars drooping pockets of flab or unsightly hanks of oddly placed hair. No, the NSX just looks classic, and will still give you huge returns on your investment. You can get a decent NSX for half of the $60,000 it cost when new, spend a couple grand making it perfect, and still be driving it every day even when the signal from the first cellular phone call you ever made—begging Cheryl not to leave you, humiliating yourself even though you knew even then it was the beginning of the long, protracted, agonizing end—finally reaches Arcturus ten years from now.

If you can, buy an NSX. You'll be glad you did because for once, you'll be able to look back on a decision you've made without pain and regret.

—Carl Groenick is an automotive writer living in Dexter, Michigan.