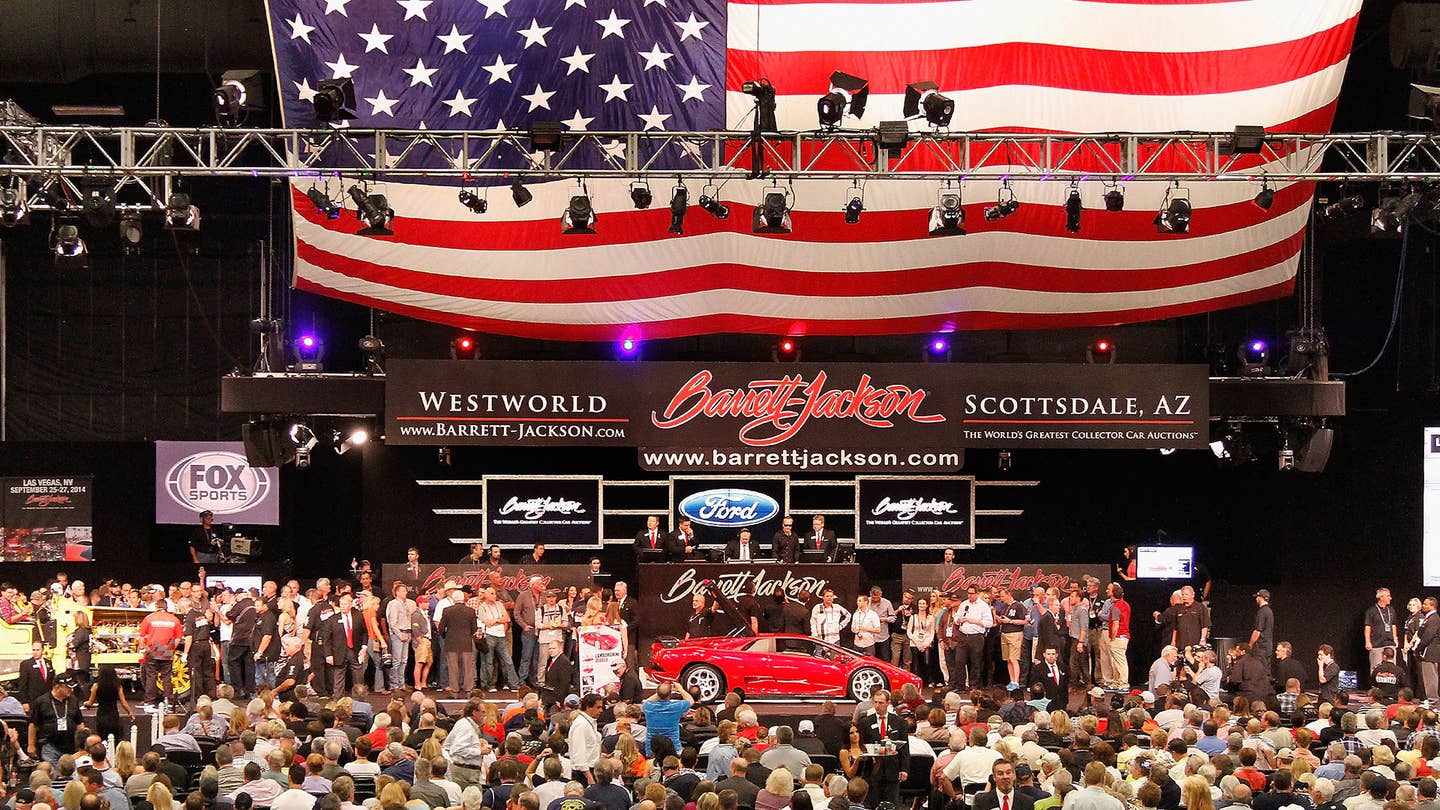 A fix is a fix. The deep bond some of us have with wheeled objects is both congenital and terminal. For those so addicted, one form of narcotic relief is the classic car auction, a rare form of automotive debauchery whereby multi-million-dollar models parade down a runway as the moneyed and lubricated bid against each other’s affections. “This is my opiate,” says one Ferrari bidder. With six total auctions inside five days, January in Scottsdale is the epicenter of the collectible car trade each year. Its Festivus. Its Babylon.

Auction Week caters to the Upstairs and the Downstairs among classic car lovers, with dollops of caviar and chicken wings alike. As always, though, money is the common denominator. Over $250 million will be spent on about 2,500 cars in total. And in the center ring of this Circus Motorus is Barrett-Jackson, celebrating 45 years in the auction game this year, and around which all the others have staked up Givenchy tents during this week in winter.

“Car collecting has gotten much broader in recent years,” says Craig Jackson, owner and ringleader of Barrett-Jackson. It has also become more visible, with television contracts bringing the proceedings into livings rooms around the world.

Where Barrett serves up a literal theme park of activities, side shows and even thrill rides in new muscle cars on an ersatz racetrack, other auction houses like RM Sotheby's, Gooding & Company and Bonhams focus mostly on the haute cuisine and the haute-est prices, catering to the exotic and Euro-centric palette.

Down on volume to Barrett-Jackson (literally and figuratively; bring earplugs to Barrett), but up on rarities, RM, Gooding and Bonhams approach this entire process more like fine art houses auctioning Mondrians rather than rare Mercedeses. One auction, Russo and Steele, does a high volume of cars focused generally on the middle of the market, yet outpaced total sales of even Bonhams, at $19.5 million to $18.2 million. The Silver Auction, lower key than any of the others, put up 515 auction lots this year, more than Bonhams, RM Sotheby's and Gooding combined, showing that there’s something for every taste, be it beer or champagne.

But one force all of the competing auctions cannot avoid is market trend. This year, even before the first gavel, all indicators hinted at a soft market and this was borne out after the first day. Many cars did not fetch their pre-sale estimates and some were even withdrawn prior to the shows, perhaps because sellers got a strong whiff of something overripe in the marketplace and did not want their treasures tainted by a “no-sale” when they did not meet either a reserve price or the pre-sale estimate. So, it’s a buyer’s market and Scottsdale sets the primary tone for the year, that tone being decidedly soft and flat at the lofty end of the pyramid, yet with action, if not high prices, in the middle and lower ranks.

Auctions provide theater, too. Bidding against rivals for a one-off, Boano-bodied 1955 Alfa Romeo 1900C SS Coupe Speciale, Shooshani persevered past several bidding plateaus to walk away with the rare Alfa for $900k. I happened to be standing next to Tony when the bidding got hot. Keep in mind bidding increments are in the ten-thousands at this level.

“Six-fifty and I'm done,” he whispers to me.

“I have six-sixty over here,” announces master auctioneer and proper Brit, Charlie Ross.

The bidding continues on to $850k.

“I thought you were done at six-fifty?,” I said.

“No, I won't take the five,” deflates Charlie. “Otherwise, we'll go up to three million by fives, and nobody wants that.”

“What fuels it for me,” Shooshani says later, “are the friendships and the family involved. What I just bought is going to recreate history. It’s one of one, by a coachbuilder that did mostly Ferraris and I get to be doing this with my buddies. Even Goodings been like a family to me. I will only buy cars that are connected with Ferrari because the history of Ferrari comes from Alfa Romeo. So, for me to be connected with that history is a gift. And I’ve told my guys they’ve got 12 months and no more to get the car done. I’ll enter the Alfa in the Mille Miglia at least several times. It’s a work of art and I get to share and enjoy it.”

There’s a major demographic shift happening in car collecting right now. The generation that grew up with cars of the 1980s is now in this culture, so automobiles that made regular appearances on TV or in movies back then (think Smokey & the Bandit or Magnum, P.I.) are ascending.

Which reiterates this point: The strongest force in the collecting hobby is how people relate to a car. That’s why we’re seeing this generational shift now with cars from the 1980s and poster cars. Those posters of Corvettes, 911s, BMWs and Countaches all fed the passion for a whole generation of post-boomers now entering the hobby.

Racing victories, aftermarket support, club activity. All of these will make the Datsun 240Z, Mazda RX-7 and Miata, and several other Japanese cars collectible.

Porsche 911s, recently redefining the crazy in car values, seem to show what is charitably called a “correction” with consistently deflated pricing. The fact that Bonhams had 16 air-cooled 911s in Scottsdale with no reserve indicates that values for this breed will—charitably speaking—soon sort itself out.

“If a particular old car speaks to you, there’s a reason,” says McKeel Hagerty, of Hagerty classic car insurance, who keeps a close pulse on the business and hobby. “It probably speaks to others, too, and that should be reason enough to buy it.”

Whether it’s a Ferrari or a Ford pickup, real originality is singular. A car is truly original only once, meaning that it retains its actual factory-fitted parts and not N.O.S. parts. A perfectly restored Mustang with new paint, replaced original-spec parts and trim is not original.

Hagerty also calls out usability as a growing driver in the classic car market.

“There’s a thread in collecting that values road rallies and usability. A significant old car that allows you to drive long distance… American-engined European specials of the 1950s through the early 1970s like Jensens, Panteras or Apollos define this practical classic theme. I’d also group first-generation Thunderbirds, or ‘baby Birds’ in this category, as well as hitting every note of the old-car hobby.”

There was a time when owners of thoroughbreds looked askance at these hybrids but those days are over.

“It’s clear that the path to ownership is through what era and which cars you love,” says Hagerty. “Once you’re in the hobby, you generally shift backwards in eras as you evolve.”

To this point, there are several factors in making a reliably collectible car, all of which will help put the Miata, 240Z, RX-7 and several other Japanese cars in good standing: market success, racing victories, aftermarket support, club activity.

“Contrary to popular opinion,” says Hagerty, “this isn't a hobby only for the well-heeled. You’ve got to be happy going into your garage and opening your eyes, but it doesn't require that you spend millions. Only a tiny fraction do.”

So get out there and buy your dream car.

Though it helps if it’s an attainable dream.