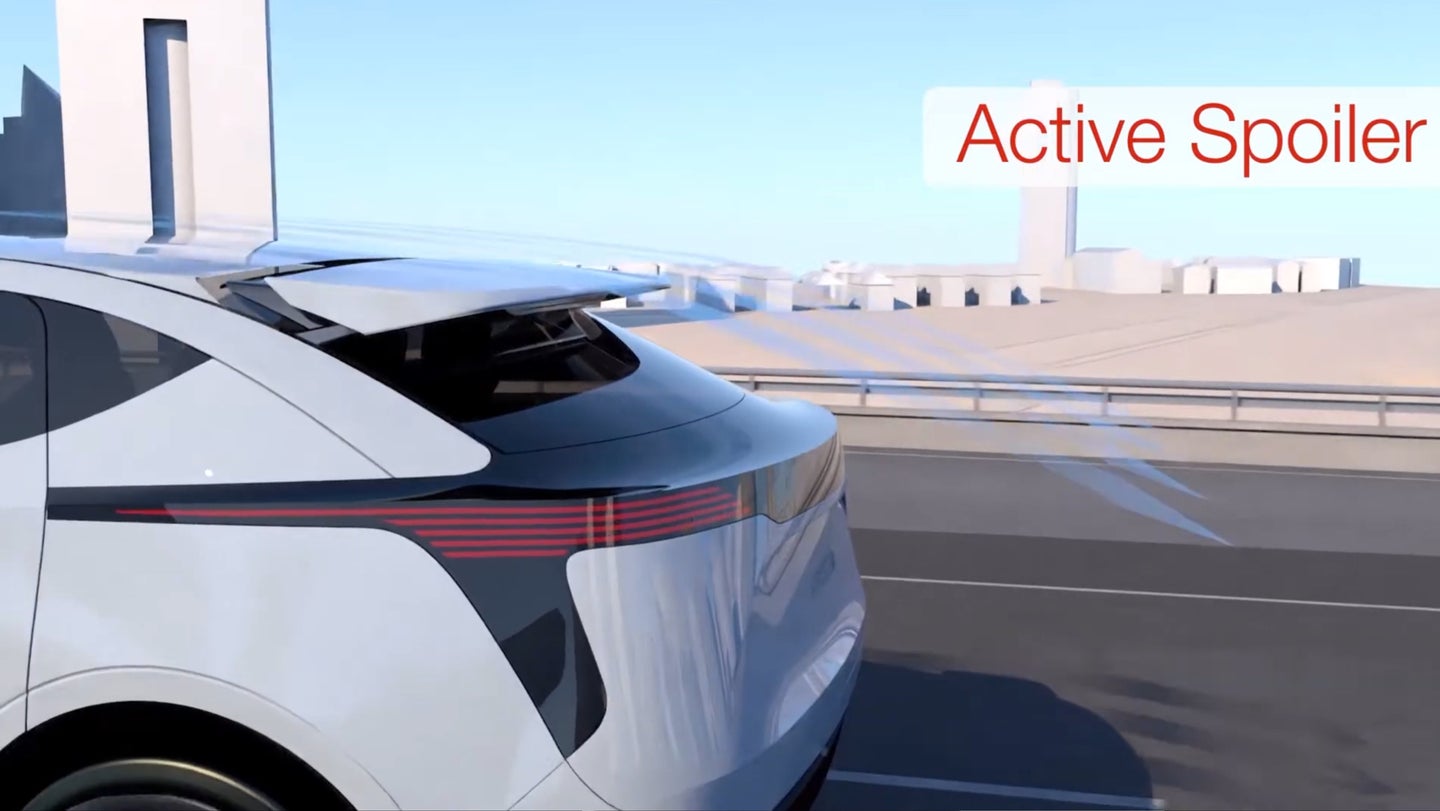 The hypermiling community has one big thing in common with racers: an obsession with aerodynamics. Both hypermilers and standing mile racers love taping up seams and smoothing everything out for as little drag as possible, for one.

High-end track cars have had active aerodynamic elements for a while that change position based on speed and driver inputs, with wings that flatten out to reduce drag on long straights and curve back up to increase downforce (and thus, grip) ahead of a turn. It's neat stuff, and now automotive supplier Magna International is using the same kind of active aerodynamics to a more everyday problem: increasing daily drivers' efficiency.

Consumers' range anxiety has produced a bit of a range war among electric vehicle makers, with the higher end of the market touting longer and longer distances for how far they can go on a single charge. Even then, stricter efficiency targets industry-wide and the fact that spending less on gas is appreciated by everyone means that Magna's tech can apply to all kinds of vehicles—not just cutting-edge EVs.

Many of these solutions will look really familiar to those of us who've geeked out over supercars in recent years. "Active" means that these aerodynamic elements move around, not unlike the rear wing of a McLaren P1. Yet instead of a McLaren, Magna's pop-up rear wing is being wind-tunnel tested on a Jeep Grand Cherokee.

Magna's active grille shutter shuts off the openings of the front grille when they're not needed, thus smoothing out the front of the vehicle. Active front wheel deflectors pop down ahead of the front wheels (sort of like mud flaps mounted on the wrong side) to direct air around the wheel wells. There's an active underbody panel that can pop down to act as an air dam in the front to guide air flowing underneath the vehicle. An active rear spoiler guides air down behind the car, improving its efficiency. An active rear diffuser can pop down and guide air coming underneath the vehicle up, towards the air being guided downwards by the active rear spoiler.

Using the rear spoiler and diffuser together actually makes the most difference out of anything they've tried, followed closely by the impact of the front wheel deflectors alone. You can see videos of each item on Magna's website here.

This all feels like a bit of a no-brainer to anyone who's fallen down the hypermiling build rabbit hole. So, look for these neat active aero tricks to appear on road cars as manufacturers want to advertise the most efficient numbers possible nowadays. (We're still going to give you crap if you compare your Grand Cherokee to a McLaren because of it, though. We're just saying.)

With Active Aerodynamics, Supercars Set to Take One Step Closer to Being Road-Going Aircraft

Contorting spoilers and shape-shifting body panels are about to reshape driving.