With Active Aerodynamics, Supercars Set to Take One Step Closer to Being Road-Going Aircraft

Contorting spoilers and shape-shifting body panels are about to reshape driving. 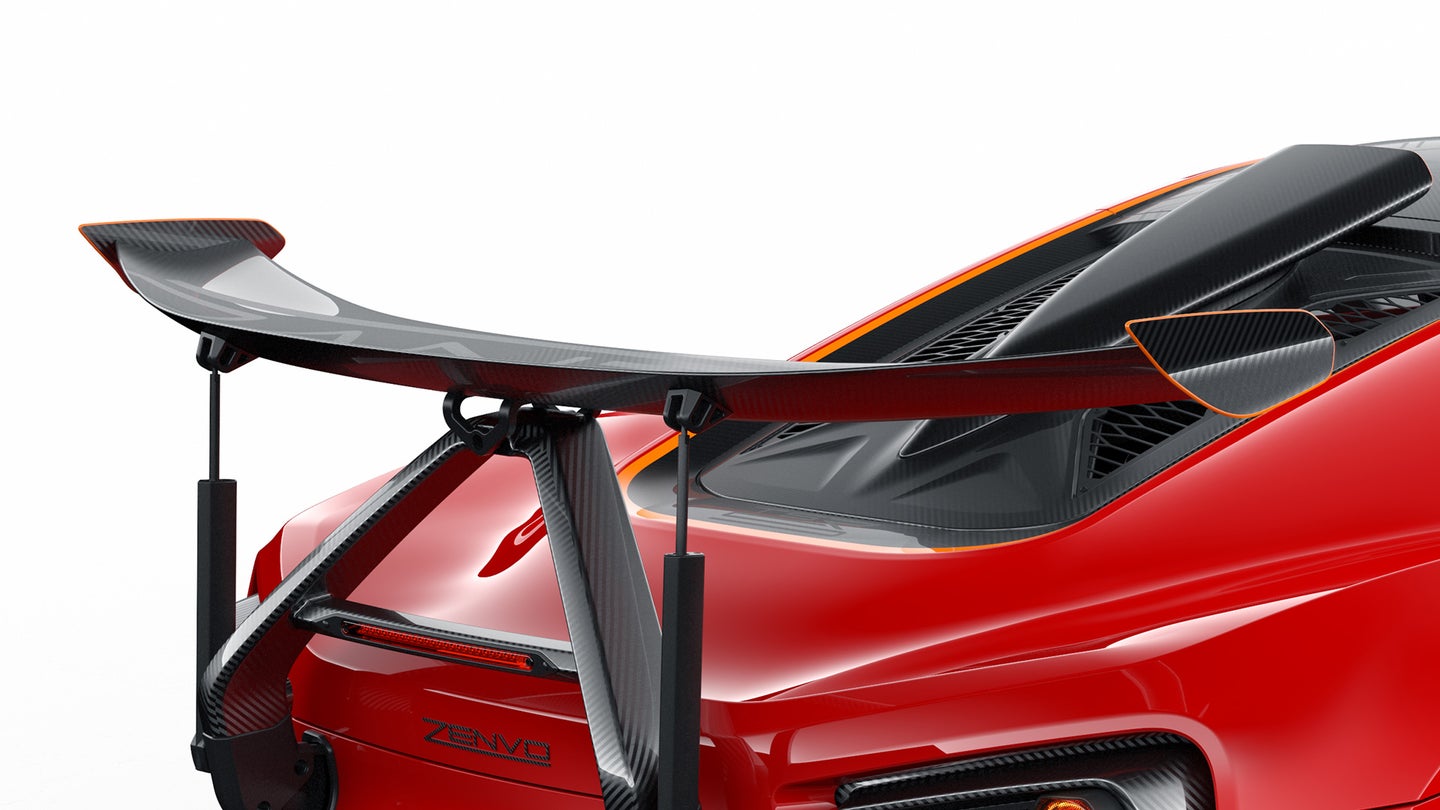 One of the most surprising vehicles to emerge this past March from the Geneva International Motor Show—an event with a particularly high bar for surprises—was the Zenvo TSR-S. The 1,200 horsepower boutique supercar had plenty of sexy lines and competitive performance number claims—205 mph top speed, 0-60 mph in 2.8 seconds—but it wasn’t that familiar stuff that turned heads. It was the rear spoiler.

Right there on the show floor, the big black “Centripetal Wing” pitched, dipped, danced, and cavorted in lurid fashion on the busy rear deck of the car, like an enormous vulture trying to lift off with a bloated red carcass. It was the most dramatic application yet seen of active aerodynamics in a car—components that alter their shape or position to optimize airflow in different driving conditions. This craning vision seemed insanely futuristic, but also a bit overwrought. Indeed, when the first video of the car in action showed up on YouTube in May, the thing did look a bit silly. It may have been the seemingly slow pace of the vehicle around a twisty track that gives the wing an all-sound-and-fury vibe, or simply that it felt hard to imaging the wing actually doing all that much good, particularly given the weight and complexity it certainly introduced into the vehicle.

But regardless of whether it cuts seconds or milliseconds off the car’s track times—the company claims the wing causes downforce to stay perpendicular to the plane of the wing, thus generating centripetal force and reducing the tendency of the rear end to break away—active aerodynamics has been taking hold in performance vehicles for years. Such technologies as active rear spoilers, which simply lift up and retract at various speeds, were first seen in production cars in the Volkswagen Corrado in 1988 but have since become de rigeur in sports cars from Porsches to Bugattis. Other cars use opening and closing vents in the vicinity of the front grill to modulate airflow into the engine or brakes while while still maintaining a slippery external surface when needed.

The newest variations of these measures will be in full force at this weekend’s Goodwood Festival of Speed, with active aerodynamics...well, basically everywhere. In addition to the Bugatti Chiron—with its rear spoiler that pops up to generate downforce when cornering, tucks itself away for top-speed runs, and flips vertically for use as an air brake—there will also be the exotic Fenyr Supersport hypercar from Dubai’s W Motors with its “Triptych” electromechanical active spoiler, the Ford GT with its own springy wing as well as front splitter ducts that can close up for optimized downforce in hard driving, and the new McLaren 600 LT apparently rocking its own newly fine-tuned active rear spoiler.

So where is all this headed? Advanced active aerodynamics have been on the drawing boards for cars for decades, with far-out concepts for actual morphing surfaces that behave much like aerodynamic control surfaces on aircraft—imaging ailerons and rudders helping you maneuver through turns—and entire panels that bulge and distort for wicked turning capabilities. But while those far-out visions are certainly enticing, the science is evolving at a more practical pace, according to Kevin Garry, a professor of experimental aerodynamics at Cranfield University in the U.K.

“We have been interested in ‘active’ flow control for automotive applications for some time, primarily passenger cars and large trucks,” Garry says. “This is usually at a more subtle level that the Zenvo example, but the potential benefits for fuel economy, cooling and handling are clear.”

So-called “flow field manipulation” that matches the shape of the car to the on-road conditions and wind speed and direction is the most prominent approach, as with a device Garry’s team helped design for trucking supplier Hatcher Aerodynamics that adjust spoilers and opens panels on the trucks’ cabs with an eye toward fuel efficiency. (In the case of the Zenvo, Garry notes that vehicles with dynamic changes that severe should have commensurate adjustments on both the front and rear of the car to maintain balanced loading, something the Zenvo doesn’t seem to do.)

In the future, Garry adds, smart materials and integrated airflow sensors will allow cars to manipulate the airflow—and hence the aerodynamic load distribution—more precisely on the road, factoring in everything from the twists and turns and rises and dips in the road to the aerodynamic impact of other vehicles riding in close proximity to one another. Autonomous vehicles will also be able to use this active fine-tuning of airflow to maximize the benefit of ‘platooning’—that is, vehicles driving just inches from each other’s bumpers for the ultimate in efficient, low-drag on-road transportation.

“The respective vehicles and their flow-sensing systems would be communicating with each other to adjust the flow field of the platoon under various driving conditions, thereby obtaining a ‘collective optimum,’” Garry says.

It’s not quite as dramatic as the Zenvo, he points out, but such smart materials and sensors have much to contribute even to sports cars, including collaboration with suspension systems and possible chassis and structural changes that can be executed in harmony with the airflow mods. In fact, the sky’s pretty much the limit with this technology: Even airplanes of the future will be able to exploit these airflow-managing innovations and even newer morphing control surfaces—think elegantly twisting wings and rudders to change direction rather than the abrupt deflecting panels of today—in the pursuit of efficiency and precision. By then, the Zenvo Centripetal Wing may be ancient history, but at least not before helping point the technology in the right direction.