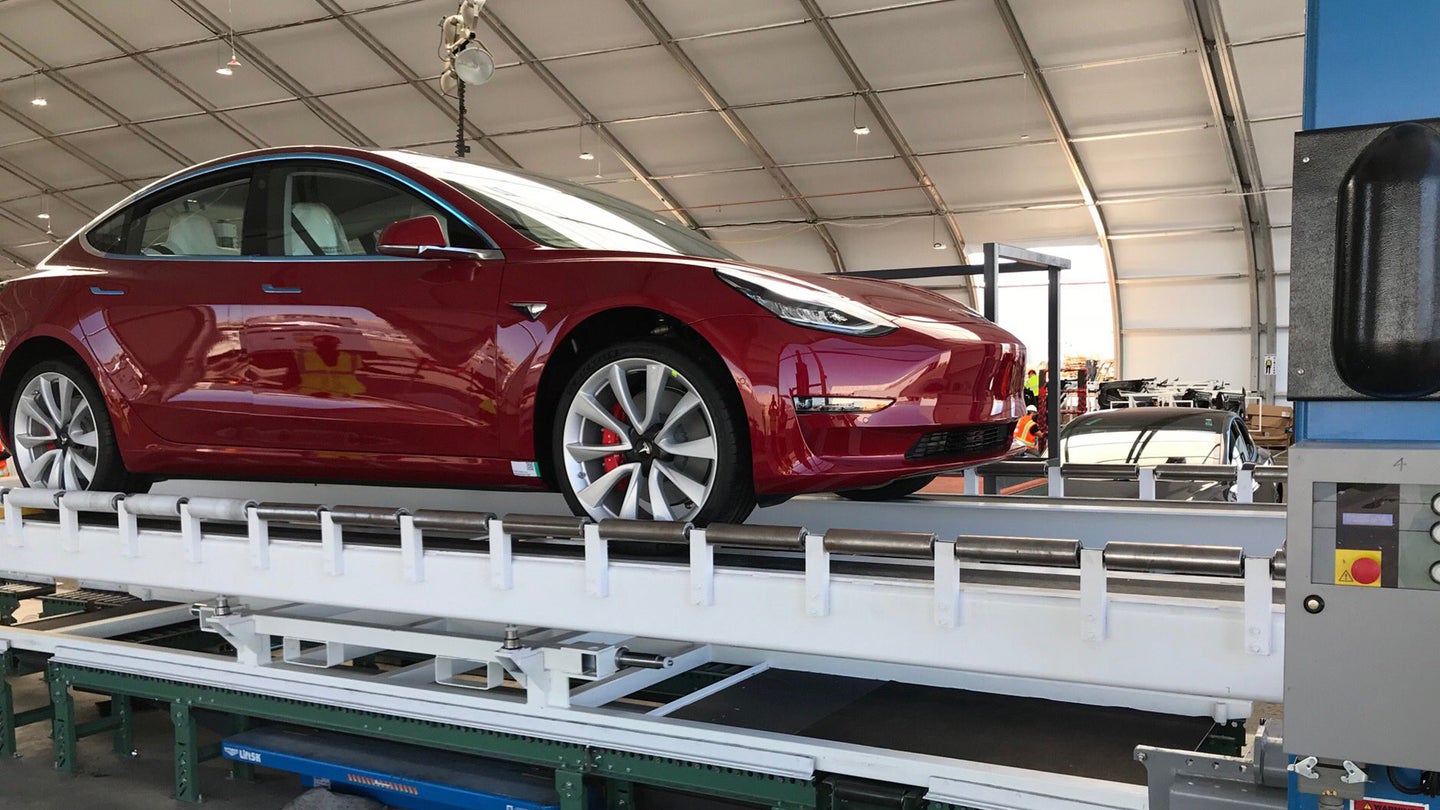 Tesla finally reached its long-promised goal of building 5,000 new Model 3s per week at the end of June, and like with most Big Deals, there were a few asterisks floating around above the fanfare. Some lean on the existential side, open questions about the company's future that a single met production goal can't answer. And then there was this nugget, first reported by Business Insider: during that last frenzied week, CEO Elon Musk allegedly told his engineers to ditch a "critical" braking test on the Tesla Model 3 in order to get enough cars out the door...err, tent flap.

That's certainly an eye-catching headline, even by the clicky standard of most Tesla-related stories. It was backed up by confirmation from an apparently concerned observer within the Tesla factory, plus screenshots of a computer system that reportedly showed the industry standard brake-and-roll test—designed to test a car's acceleration and hard braking—had been deemed non-critical by the company. A few quotes from an outside expert declaring it an unsafely cut corner, and voila, another piece exposing the fault lines at Tesla.

As is often the case on the internet, that headline beget other headlines (including one on this website), all with the same context-free word cluster. And as is also often the case, that missing context is what makes the story a magic mirror for the way we talk about Tesla. We see what we want to see. It's either confirmation that the company really is in dire straits, or that the biased media really has it out for Musk and his bootstrapping ways. Middle ground? Not where we're going.

Yet that's exactly where we need to be to understand this story. It starts with a careful read of the original piece, which asserts the brake-and-roll test was randomly dropped for "unclear" reasons in the same week as a massive production push. Yet Tesla spokesman Dave Arnold offers a pretty basic explanation in his strenuous rebuttal further down in the piece: that specific braking test is actually redundant because the company is still putting every Model 3 on a physical test track as soon as it rolls off the line, giving engineers an equal chance to test the brakes.

It should be noted that major manufacturers have neither the time nor capacity to put every single car they produce on a real test track, which is why individual system tests like the brake-and-roll have become the standard for safety checks. But it wasn't—instead, most outlets who picked up this story ran with the same simplistic framing. Tesla allegedly cut another corner to get the Model 3 going, Musk claims everything is fine, but who do you really trust?

As highlighted in an excellent piece on Roadshow, the answer should be "neither." Leafing through the coverage, it's obvious that few took the time to check the details on both the brake-and-roll and track tests. Roadshow was able to confirm that that the two feature "identical" conditions, where engineers brake normally from 60 mph to 5 mph three times in a row, then brake hard to trigger the ABS, then coast to a stop to check the drivetrain. Thus, the standalone test really was redundant—and as Roadshow points out, getting rid of redundancies is key to the development of any car, electric or gas-powered.

As noted Tesla watcher and auto journo Bozi Tatarevic said on Twitter, it's fair to question whether the company will continue to track test "every" Model 3 as production keeps increasing. We also have few details on Tesla's newly-announced China factory and whether the same exact processes will exist over there. And don't forget, the Model 3's brakes have already been in the spotlight this year after Consumer Reports found them woefully inadequate during testing, prompting an emergency over-the-air update from Tesla HQ.

In a karmic twist, the company's stock dropped after people starting running with the story last week—the inverse of what happened last month when Musk apparently (and successfully) tried to distract people from an NTSB report on battery fires with a few well-timed tweets about the forthcoming Tesla pickup truck. But it shows just how perception is driving the story when it comes to Tesla.

How do you consider a company that's both wildly innovative and wildly flawed? A good starting place would be the same way as every other automaker. That means celebrating game-changing developments while calling out bigger issues, everything from its cash burn rate to quality control to its founder's extracurricular Twitter activities. That means due diligence. And that means sometimes taking a breath before deciding whether the latest bit of news is a surefire sign of success or failure.