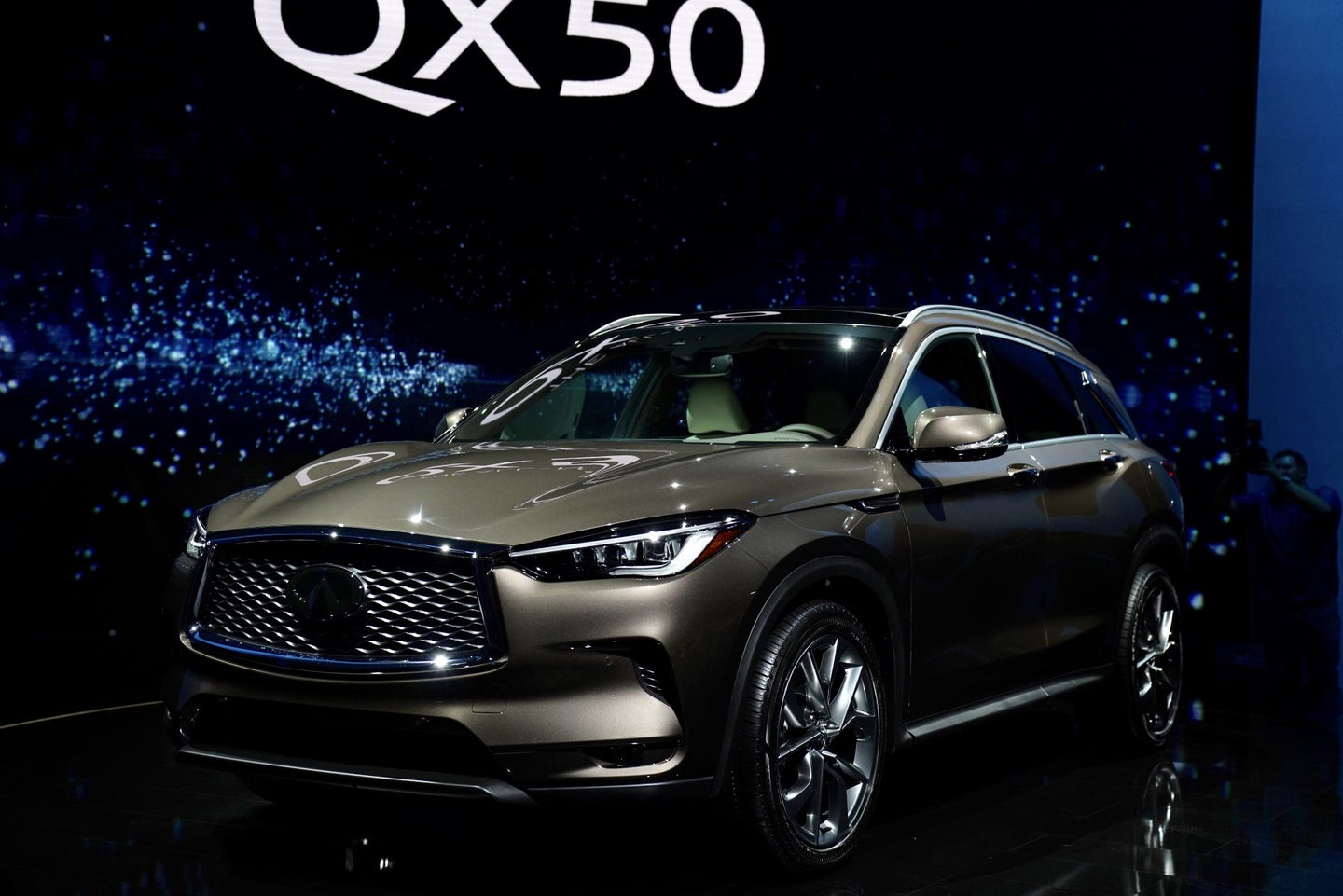 Infiniti debuted its QX50 crossover ahead of the Los Angeles Auto Show yesterday afternoon, and it’s packing a hell of a twist in the engine compartment: the world’s first variable-compression turbo engine. That’s right, it can alter the strokes of the connecting rods on the fly, dialing in compression ratios between 8:1 and 14:1 to either maximize efficiency or power. In this age of electrification, it could breath new life into the sad-sack IC engine.

The new machine is fairly impressive overall, with a new, more rigid platform, a weight loss reportedly on the order of 23 percent over the previous model, and parent Nissan’s ProPilot semi-autonomous drive capability. That helps the company catch up to other advanced cruise control systems by allowing it to steer, brake, and accelerate in harmony with the traffic around—or on the open road—while the driver stays ready to jump in at a moment’s notice.

But that engine! As the march toward automotive electrification speeds along, you’d think that engine innovation would be grinding to a sludgy, cylinder-freezing halt. Infiniti engineers are having none of it. In fact, they’ve been pursuing this tech for 20 years. Since compression ratio is key to performance and efficiency—higher ratios improve power, lower ones boost MPGs—being able to precisely modulate those digits in transit can significantly fine-tune performance. As a result, we may not be nearly as done with internal-combustion engines as you might think.

Infiniti’s strategy is simple in concept—adjust the reach of the pistons within the cylinders to change overall displacement—yet complex in execution. The company’s engineers devised a multi-link connecting rod and crankshaft system that continuously tweaks the angle of the rod, and therefore the distance it can push a piston into the cylinder. It does this based on driving style and road conditions, but the ultimate result is that the continuously changing compression ratio in the funky new turbocharged four-cylinder—dubbed the VC-Turbo—now generates diesel-caliber power and torque from gasoline without any efficiency penalties.

In fact, the new engine will produce 268 hp and 280 lb-ft of torque. The horsepower number is comparable to a larger six-cylinder engine, while the torque performance matches that of a similar diesel. But the whole system nets a 27 percent fuel-efficiency improvement over a gasoline model, without the emissions of the oil-burner. In addition, the new engine will be quieter and more compact than its bigger brethren, and generate less vibration. “It’s taken us 20 years and more than 100 prototypes, but we finally made it powerful enough and reliable enough to bring it to market,” noted Shinichi Kiga, Infiniti’s chief powertrain engineer within its Gasoline Engine Project Group.

Responding to road conditions and driver inputs—i.e., how hard he or she is flogging the car—the engine’s computer alters the strokes of the connecting rods to ratios between 8:1 and 14:1, the former being the more performance-oriented side of the spectrum and the latter the more efficient. Compression ratios, by the way, reflect the combustion chamber volume—that is, the space inside the cylinder by the piston, where fuel is ignited to push the piston back down—between greatest and smallest capacity. The number is usually fixed within engines—higher ratios generate more power with every fuel injection while lower ones burn fuel more completely, and therefore more efficiently. The new engine’s onboard computer applies the optimum ratio as conditions demand, essentially adjusting the displacement of the engine in the process. It also avoids the “knock” common to higher compression ratios, caused by premature fuel combustion, by optimizing the compression and delivering fuel via direct injection.

But how does it actually adjust all these angles and piston heights in the first place? The engine—which has more than 300 patents associated with it—uses an electric motor connected to a harmonic drive reduction gear to adjust the compression ratio. It rotates a control shaft at the base of the engine, which then moves the multi-link mechanism positioned midway up the assembly to adjust its angle. The control shaft has an eccentric shape, so its position automatically adjusts the piston height for all four cylinders simultaneously. Kiga says the multi-link design also represents a better reciprocating motion than a conventional connecting rod and crankshaft—it’s smoother, and therefore generates considerably less vibration. Vibration noise dropped from an average of 30 dB to just 10 dB in the new design.

To even further boost efficiency and power delivery, a variable valve-timing system switches seamlessly between Atkinson and regular combustion cycles—Atkinson deploying a more efficient blending of air intake and compression cycling during higher compression ratio operation and regular cycles being more step-by-step processes that optimize efficiency during low compression. (Such processes are common in hybrid engines.) But ultimately, Kiga says the engine isn’t just for efficiency enthusiasts, but driving enthusiasts, as well, since engine power and torque is more than ample, with its delivery optimized with millisecond responsiveness. Under hard acceleration—the QX50 can reach 60 mph in 6.3 seconds—it dials down the ratio; when cruising down the highway, it boosts it to the more efficient setting. The single-scroll turbocharger further helps guarantee that power delivery is there when you want or need it.

Of course, all of this technology combines to create a far more complex engine than a conventional IC engine, as well—in a period when the appeal of electric motors is its relative simplicity and negligible maintenance. Kiga assured me the VC-Turbo will remain reliable, however. “We’ve been running prototypes through more than 30,000 hours of testing on stands in addition to our on-road testing,” he said. Infiniti’s partnership with Renault Sport Formula 1 helped out here, as that group’s engineers helped manage durability testing during the engine’s development.

The variable-compression technology will eventually roll out to other models in the Inifniti lineup, becoming the foundation of its engine offerings. Will it truly make internal combustion engines still competitive in this modern era of maximum efficiency? Infiniti has bet 20 years of R&D on it.