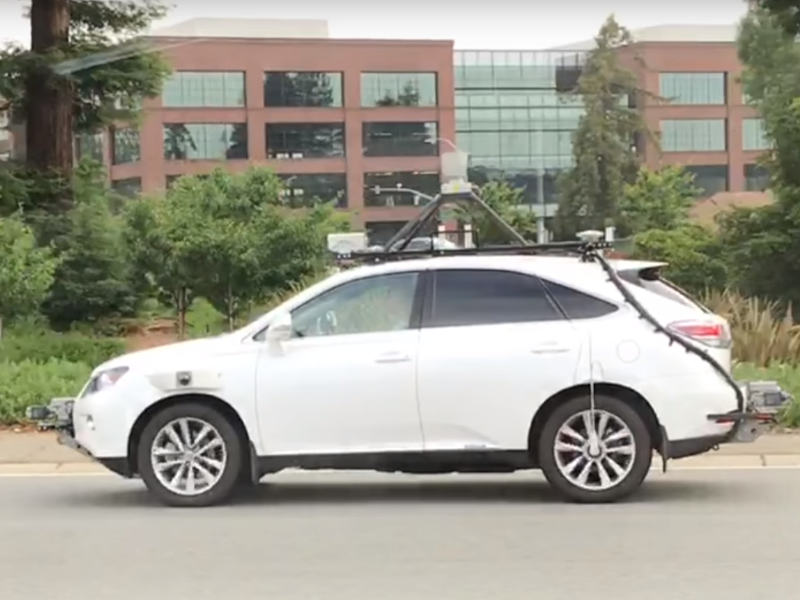 Now that Apple has a permit to test its fledgling autonomous vehicle setup on California roads, it's clear the company is racing to catch up with the competition after years of delays and false starts. Last month, it was Bloomberg who grabbed the first images of a tech-laden Lexus RX450h being used as an Apple self-driving car mule; now, MacRumors gives us a first look at the white SUV in motion.

Captured by a MacRumors reader yesterday in Palo Alto, the clip shows the white Lexus exiting the 101 North freeway onto a frontage road carrying the same array of cameras, sensors, and radar seen in the Bloomberg images. Apple is currently operating three of these test cars, according to the permit documents, and experts say the fact that the system is cobbled together with purchased components (including top-of-the-line lidar from Velodyne) indicates a software-first approach.

That would square with the string of reports dating back to last September that indicated Apple was scaling back its ambitious plan to build its own car from scratch. Project Titan was conceived as a way to beat auto manufacturers at their own game, but delays and cost overruns eventually led to layoffs and a shift in strategy towards the technology side, under the leadership of Apple veteran Bob Mansfield.

With the crack team facing an end-of-year deadline to prove the "feasibility" of the whole project to upper management, it appears they're pushing full steam ahead on the testing phase. And if the Lexus was operating autonomously in this video, they're off to a pretty good start—though it appears to be hugging the right side of the road, it's actually headed for a secondary exit that doesn't have its own lane.

MacRumors points out that like other companies testing self-driving setups, Apple is required by California law to file public "Disengagement Reports" at the end of the year summarizing their data and disclosing any adverse incidents. Even though we're bound to see more of these camera-laden Lexus fleet in the meantime, don't expect much in the way of concrete information from the notoriously tight-lipped company until then.