If you want mainstream autonomous cars, lidar prices have to fall. And that's happening sooner than you think. 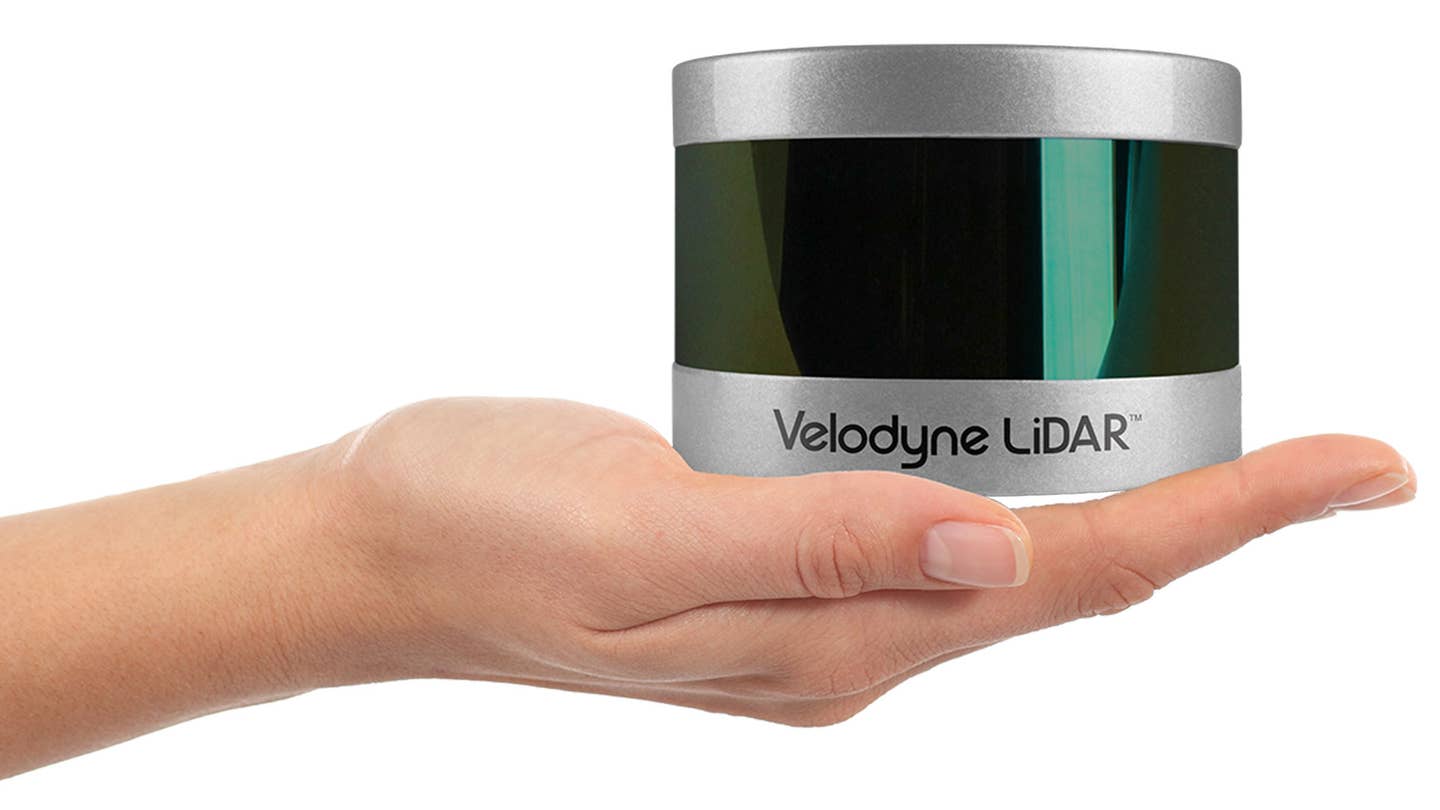 The lasers are coming. Yesterday, Velodyne revealed its solid-state lidar, making it the second company in the U.S. that can supply the automotive market with a low-cost, automotive-grade laser light-based detecting and sensing component with no moving parts.

Older generations of this technology was expensive, large, and had spinning mechanical pieces that could easily break during operation—all of which made it less than ideal to saddle onto a passenger autonomous vehicles. But Quanergy set a new bar when it launched its $250 S3 solid-state lidar at the 2016 Consumer Electronics Show; now, Velodyne has cleared it. The Morgan Hill, California-based company says it can can deliver a subsystem for less than $50.

At this rate, it's just a matter of time until lidar will be available for so little money that it becomes as ubiquitous as anti-lock brakes, and cheap enough that every manufacturer will use it in its autonomous platform. Perhaps even the technology's biggest holdout.

"My prediction is that Elon will give in in 2017 and do lidar," says Alex Lidow, CEO of Efficient Power Conversion (EPC), who supplies a monolithic gallium nitride (GaN) integrated circuit to all companies making automotive-grade solid state lidar. He's referring to Tesla CEO Elon Musk, whose public position is firmly against using the sensing technology as a component in his autonomous system. But soon he will have no excuse not to. That's because lidar—which is short for "Light Detection and Ranging," is about to get really cheap.

Lidar is a three-dimensional sensing technology that uses laser beams that scan vertically and horizontally to generate more than a million data points per second, creating a point cloud to detect and identify objects within a centimeter of accuracy. It can see more than 800 feet in front of it with a horizontal sweep of up to 360 degrees, up to 40 feet vertically, and measure distances in nanoseconds—which is important for an autonomous car.

Vehicles need to be able to identify objects with extreme precision, says Lidow, but speed isn’t just how fast can you develop image of surroundings—it's how fast you can process what objects are and what to do about them. That's where software and deep learning artificial intelligence comes in. Autonomous vehicles require billions and billions of miles of road testing to help them understand and contextualize not only what objects are, but how they behave, and most importantly, what the vehicle needs to do about it. (Tumbleweeds, for example, are large objects that can roll across roads seemingly out of nowhere...but given its mass, should a vehicle stop?)

These decisions can be made quickly using lidar, which is limited only by the speed of light and the software algorithms in use. Cameras, in comparison, are far more limited; they see the world two-dimensionally, they're highly dependent on the quality of ambient light for accuracy, and they have a higher algorithmic burden required to build a map with any semblance of the accuracy achieved with lidar.

The major advantage of cameras, then is that they're so much cheaper than lidar—but the excuse that it's too expensive to use lidar in mainstream vehicles is quickly disappearing. Eventually, it will become cheaper to implement a system with lidar than not.

Before long, lidar will fall to $10, according to Lidow, which helped Velodyne develop its new component. Cheap lidar means that manufacturers will be able to put it on all passenger automobiles, not just luxury or commercial vehicles.

Eventually, it will be less expensive to use lidar in an autonomous platform than to use both cameras and radars, which is what Tesla says it is planning. A vehicle only needs three or four lidar modules to get a 360-degree view of its surroundings, compared to the eight cameras on a Tesla Model S. And that's not to mention the software and expensive Drive PX2 processors, which in Tesla's contract are rumored to cost approximately $250 per chip.

But it's a bit of a catch-22 to get there. Large volumes are required to achieve low costs, and you can't get to large volumes until prices come down. EPC has helped lower manufacturing costs by replacing silicon with better-performing gallium nitride, removing the need for mechanical parts. While this breakthrough technology is impressive in its own right, it has started a race to see which technology company can build this sensor the cheapest—and that's a good thing, according to Velodyne.

"The pressure to make it much more specific means that customers are looking at it as something to put on every car," says Anand Gopalan, vice president of research & development at Velodyne.

With 100 million vehicles built each year, each wearing three or four lidar sensors, costs could drop to $8 or $9 per unit. And that's with the current state of technology; there are companies that are trying to build lidar on a single chip, which could make it even cheaper.

This means in the not too distant future, all new vehicles may be equipped with this technology. It may even wind up being required by the National Highway Transportation and Safety Administration, to reduce accidents or facilitate autonomous driving technology. Vehicles that are safer will benefit everyone—even if you drive a Tesla.