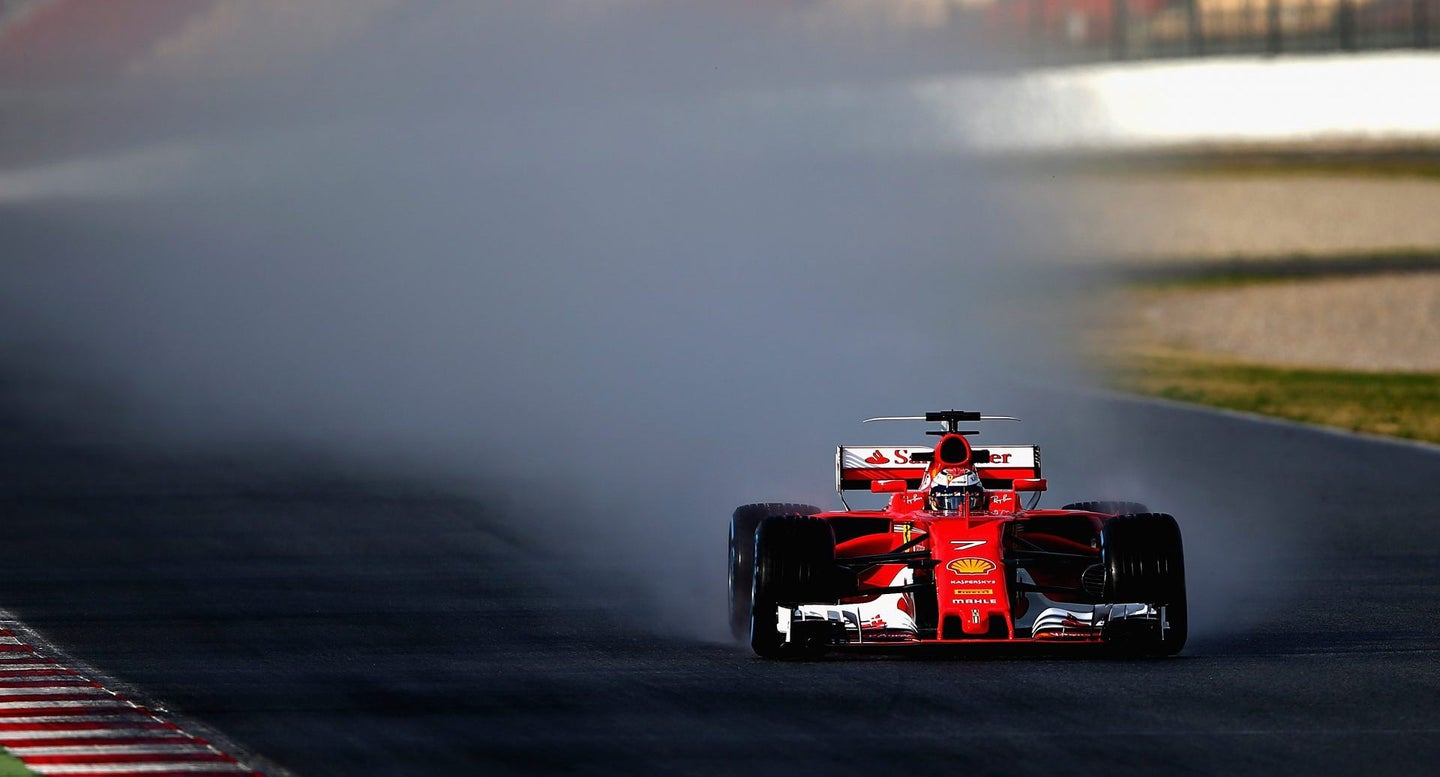 Kimi Raikkonen and the Scuderia Ferrari team topped the timesheets on the final day of the first 2017 F1 test from the Circuit de Barcelona-Catalunya in Spain.

It was a change from the status quo of testing, with Formula 1 using water trucks to artificially dampen the nearly three-mile track. Formula 1 did it at the request of several teams that wished to test out the new 2017-spec Pirelli wet and intermediate tires. Wetting the track with trucks and then allowing it to dry in the Spanish sun, allowed teams to figure out the crossover points between wet, intermediate and dry Pirelli compounds.

That being said, all of the fastest times of the day were set in the dry, with Raikkonen coming in fastest with a 1:20.872. Unlike the previous test days, Ferrari were not joined at the top by reigning champs Mercedes, but by Red Bull Racing's Max Verstappen. Though they struggled on the first day with a sensor issue, Red Bull has shown themselves in the last two days of testing as a force to be reckoned with going into Australia.

Renault's Jolyon Palmer and Haas' Romain Grosjean are pleasant surprises in third and fourth, respectively. The typically mid-pack teams are probably pretty pleased with their final day of testing performance, as both drivers wound up in the top five. Whether that pace continues in Australia remains to be seen, plus the boost on the charts was likely aided by uncharacteristically poor positions garnered by Mercedes, Toro Rosso and Williams.

Mercedes' Valtteri Bottas was the only Merc driver to take the helm today, turning 68 laps and setting the eighth fastest lap of the day. The team has shown their speed all week and despite an electrical issue taking them out of the morning session, chances are, this eighth place isn't worrying them in the slightest.

Toro Rosso also had problems in testing today. The Red Bull junior team car, at the hands of Daniil Kvyat, managed just one installation lap before requiring a power unit change. The car would not make it back out on track.

However, at least Toro Rosso managed one lap today. It's one more than the Williams team was able to do. After Felipe Massa's excellent start to the week, putting the car third on the first day of testing, Williams was probably not expecting their first test of 2017 to end an entire day early. Rookie Lance Stroll binned the car three times in his two days of testing and extensive damage cut the team's test a day short with neither driver getting to run laps on the final day.

Check out all of the times from the final day of testing below. Formula 1 is back in action for testing in Spain on March 7th.