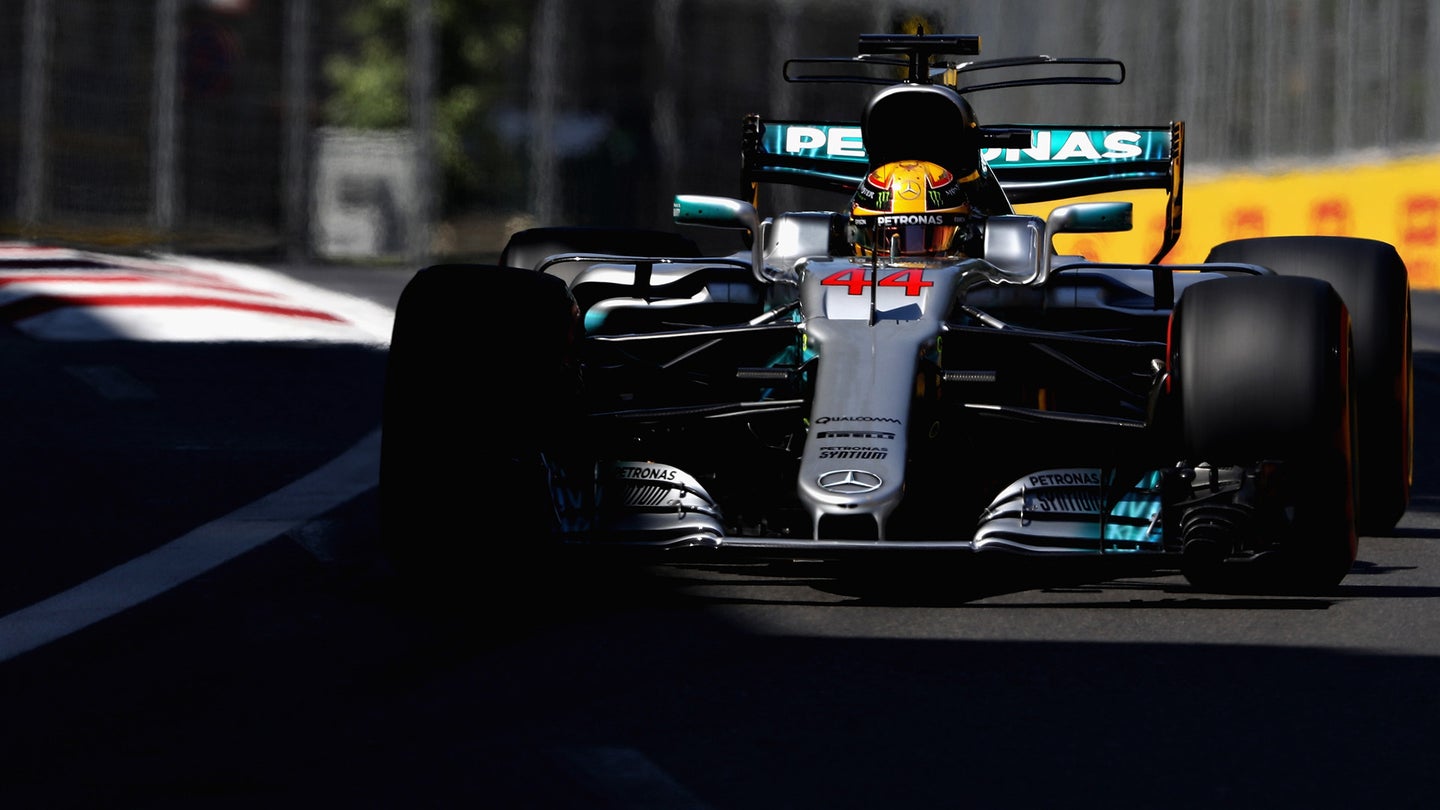 Lewis Hamilton took pole by 0.434 seconds at the Azerbaijan Grand Prix  Saturday with his Mercedes teammate Valtteri Bottas taking the second spot. Bottas was on provisional pole when the session was red flagged with three and half minutes left to go. With a lap around the Baku track taking just over one minute and 40 seconds, beating Bottas' time was going to be tough.

The red flag came out when Red Bull's Daniel Ricciardo hit a wall exiting Turn 6, smashing up his left rear suspension. After putting in their first timed laps, all the drivers opted to stay out rather than pitting for new tires. The length of the lap made it difficult to get the tires up to their optimal temperature in just one lap. When Ricciardo crashed, everyone (except the Williams pair who had not set a time yet) was setting faster sector times on old tires. Pitting for fresh rubber would be a risky move.

The Red Bulls had been outpacing both Mercedes and Ferrari in the practice session. With Ricciardo out, the six-way fight for pole was down to just five. Red Bull driver Max Verstappen took to the track first once the red flag was lifted. The Mercedes pair was right behind him, but only Verstappen got around the track with enough time on the clock to get in two hot laps.

Verstappen's first lap wasn't good enough to challenge the Mercedes pair. Bottas crossed the line next, improving his time by about two tenths. Hamilton followed seconds later, shaving more than a half second from his time and taking pole. Verstappen backed out of his second timed lap as there was no point in risking the car when pole was out of reach.

The Ferrari duo locked out the second row with Kimi Raikkonen taking third and Sebastian Vettel in fourth. Verstappen ended up in fifth. Force India took sixth and seventh with Sergio Perez beating his teammate Esteban Ocon by just 0.075 seconds. Lance Stroll out-qualified his teammate Felipe Massa by a marginal 0.045 seconds for eighth and ninth. Ricciardo will start in tenth following his crash.

At the other end of the grid, Renault's Jolyon Palmer will start last. His car had a fuel fire the morning practice session and was not even close to being repaired for qualifying. Grid spot penalties negated any gains that McLaren-Honda may have made. Fernando Alonso will start 19th having been assessed 40 grid spots worth of penalties. His teammate Stoffel Vandoorne sits 18th on the grid with 35 spots of penalties.

Be sure to watch the onboard video of Hamilton's pole lap. The Baku circuit might not be the best track to have a race on, but it sure looks like a blast to drive.