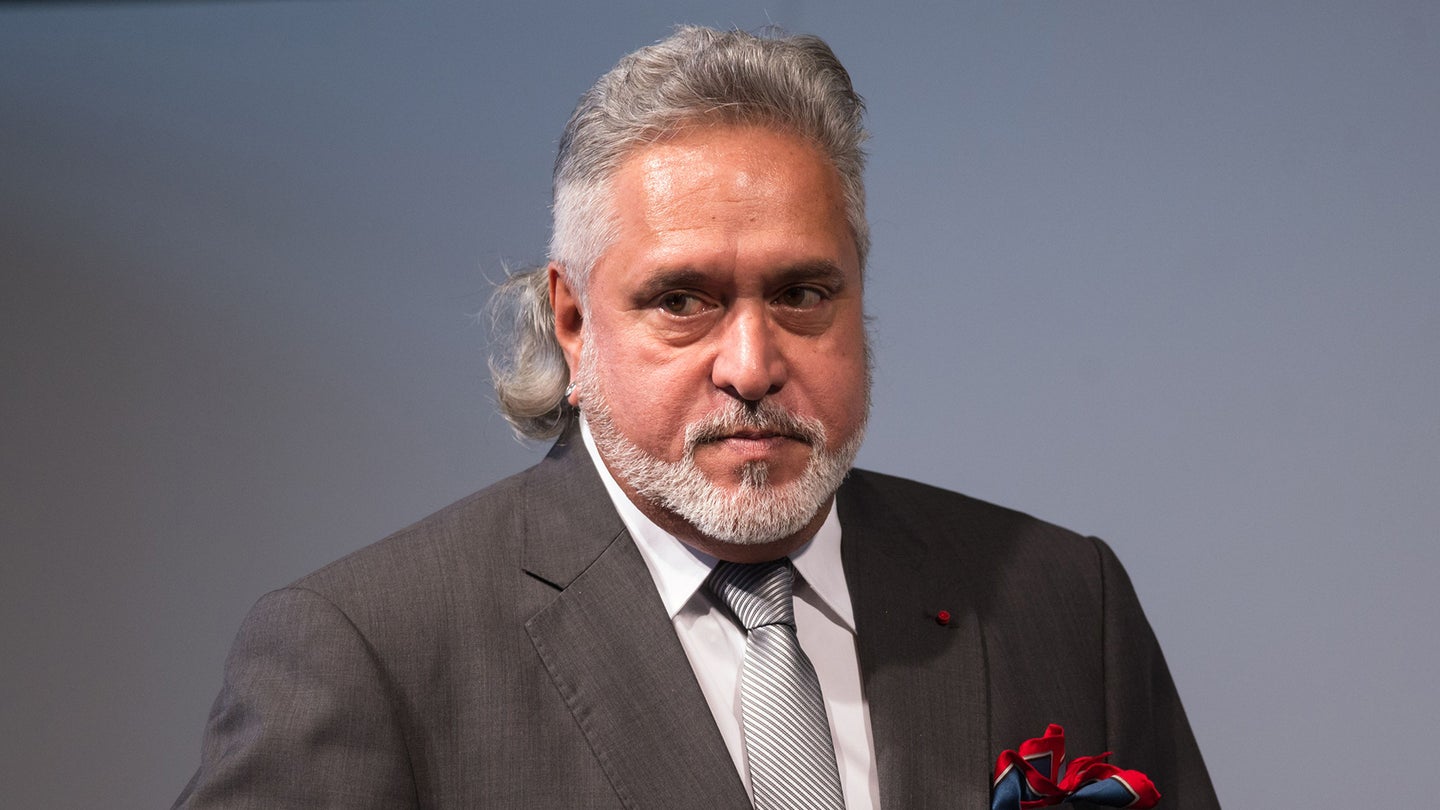 Just about six weeks ago, Force India owner, and self-proclaimed "King of Good Times", Vijay Mallya was arrested in London on an extradition warrant from India. He is alleged to owe in the area of $1 billion to banks, the government, and former employees. You can, and should, read about how he got himself into this mess here.

After some delays, his extradition hearing is scheduled for June 13, 2017. Between his arrest and now, a few things have happened. With extradition seeming much more likely than not, Mallya's world is slowly coming undone.

On May 7, 2017, just ten days before the original extradition hearing date, Mallya was found to be in contempt by India's Supreme Court. At extradition, India will have to show a likelihood of guilt of the charges against Mallya. Being found guilty of contempt prior to the extradition hearing pretty much seals his fate.

This contempt charge is a bit more serious than the the ones you see on television when a fictional lawyer gets sassy with a judge. The petition for contempt was brought to the court by the banks that Mallya owes money to. The largest of those creditors is the State Bank of India, which is government owned. The charge stems from Mallya, despite a court order, transferring $40 million out of the country to his children. He had also attempted to transfer a $75 million payout from United Spirits, but the court was able to block it.

The Supreme Court of India ordered him to appear on July 10, 2017. The stage has been set for his extradition from England to India.

If the contempt ruling is, in fact, used in the extradition case, Mallya and his lawyers could try to counter the claim. They may argue that the state-owned State Bank of India trumped-up this contempt verdict with the Supreme Court of India in an effort to smear Mallya and return him to India against his will.

The "woe-is-me" defense probably won't work in this instance. It seems fairly clear that Mallya violated the court's order by transferring the money to his children. There is also the matter of the money he pocketed upon the sale of his stake in United Spirits. The proceeds from that $2 billion sale were to be used to pay off the $1 billion his Kingfisher Airline debts. It wasn't. If it had, this whole matter would have been resolved long ago.

The only reason it has taken this long to get to the extradition stage is that India wanted to make sure everything was in place to be successful at the hearing. India's Enforcement Directorate has prepared their formal "charge sheet" that outlines Mallya's alleged money laundering and fraud. Besides being found guilty of contempt, this 2,000 page document will be used to show a likelihood of guilt at the extradition hearing.

Back in India, Mallya's assets are being seized by the government. It has taken control of his shares of various companies. For example, the government has taken his 30% stake in United Breweries. Now, the private banks and the government are fighting it out to see who gets the first chance to recover monies lost to Mallya once the shares are sold. It's being reported that Heineken is interested in buying that 30%, but the fight over who gets the proceeds is complicating and slowing down the process.

The banks involved in all of this had previously taken possession of the Kingfisher Airline headquarters, known as Kingfisher House. The property has gone to action for the fifth time, with no buyers. Another property in Goa that Mallya owned, a sea-side retreat named Kingfisher Villa, was sold at auction in April on it's third trip to the block.

Mallya's former company, United Spirits, is selling off 13 "non-core" businesses that Mallya once ran. Mallya had the option to buy them back, but missed deadlines to do so. United Spirits will be selling the unnamed, "non-core assets" at market value through a supervised and transparent process overseen by their board. Given the situation that Mallya created for them, they are proceeding with an abundance of caution as to not fall afoul of government regulators when the assets are sold.

Somehow, Mallya still owns the Force India Formula One team. There are constant rumors of the team's pending sale, but nothing concrete yet. This is an asset that Mallya probably won't let go of until he is forced to do so. While he is still the owner, that means he occasionally pops up to complain about something. Like, for example, Formula One's prize money distribution.

Mallya recently spoke to Motorsport.com about this. He wants a more equitable split of the money, which would net him and the team a larger take than they currently get. While this is a legitimate issue that is being discussed in Formula One, the irony of being the so vocal about it seems lost on Mallya. Being accused of money laundering, fraud, tax evasion, and unpaid wages to the amount of $1 billion while complaining that your Formula One team isn't getting enough prize money isn't going to win him any points with the courts.

Until this matter is settled by the courts in England and India, Mallya is still innocent; only alleged to have committed these crimes. Except for the guilty contempt charge for moving $40 million out of the country and trying to move an additional $75 million. He remains stuck in England, at his sprawling country estate, with no valid passport to travel on. But he is free to travel inside the country as he sees fit.

Just today, he showed up at a cricket match about two hours away from his home, in Birmingham, between the national teams of India and Pakistan.

I'm sure that will go over wonderfully in the Indian newspapers tomorrow.