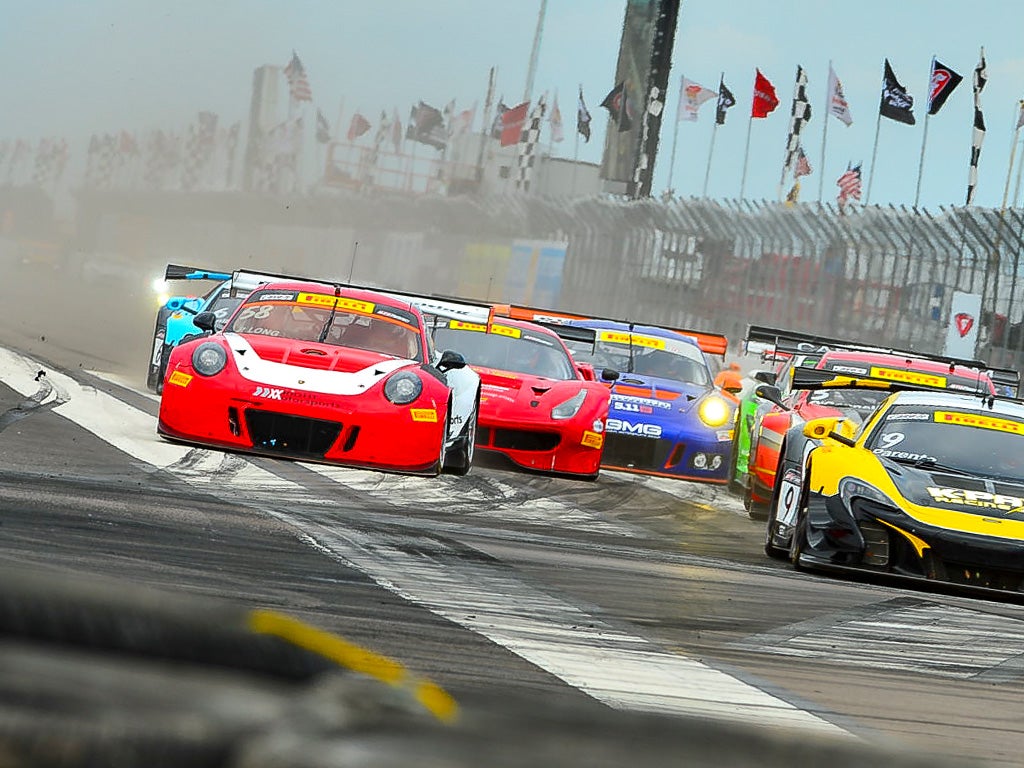 The double-header event in St. Petersburg, FL over the weekend was a big one for Porsche, kicking off the Pirelli World Challenge GT championship, which features a handful of Porsche's 911 GT3 R racers, in the hands of privateer teams. Porsche teams were in Florida competing against the best FIA GT3-spec cars from McLaren, Ferrari, Bentley, Aston Martin, Cadillac, Acura, Audi, and Mercedes in a pair of 50-minute sprint races, one Saturday and one Sunday. Porsche factory ace Patrick Long has a really good chance of competing well in the 2017 PWC GT championship, and after this weekend should leave St. Pete with the provisional championship points lead.

During Saturday's race, reigning GT champion and KPax McLaren driver Alvaro Parente jumped into the lead at turn four of lap two when he overtook pole-sitter Daniel Mancinelli, and nobody else even had a chance at the lead. Parente had stretched a lead of over two seconds, and managed traffic well to stretch that lead in the final ten laps of the race. The concrete surface bumpy street-ish course doesn't lend itself well to passing with primarily short straights and 90 degree turns, meaning that qualifying and the initial start are the most important segments in terms of race strategy. Aston Martin driver JD Davison ultimately finished in second position with Pat Long following up with the final podium position.

Pat Long on his race 1 results:

“We had quite a battle with Johnny (O’Connell) early in the race and later on with James (Davison). I had to look into passing in several areas today and it was extremely competitive. I came back to the Pirelli World Challenge last year after being away since 2011 and, boy, the competition level has really jumped up. Many of the newcomers to series this year like Pierre (Kaffer) found out the new level today. It’s a sprint race for 50 minutes and there is no give and take. It’s a constant push for the driver. I also wanted a good lap time for Sunday’s race lineup and I was able to do that in the middle of the race. But then (Alex) Riberas and Alvaro (Parente) turned just quicker at the end, so I missed out on the pole for Sunday.”

The first lap of Sunday's race saw a manic start with Pat Long jumping from third on the grid up into the lead as race one winner and race two pole sitter Parente pushed wide into turn 1. Also going wide was second-placed Ferrari driver Alex Riberas who recovered into third behind Cadillac factory driver Johnny O'Connell. Again a relatively processional race, Long stretched a lead of about 2 seconds and kept that up throughout the 50-minute race, never seeing any real challenge on his lead. There was a short full-course-yellow flag with five minutes to go that was cleaned up quickly and back racing with a two-lap sprint to the finish, which Long managed well. Parente's bobble at the start dumped him back to 7th or so, and saw him fighting for the next 45 minutes give or take to get back to the point. Ultimately Parente could recover no further than fourth, giving Pat the race win and the slight points lead after the first weekend of the season.

Again Udell took the GTA class victory, gaining seven positions on the initial start. This time in GT Cup, Preston Calvert was the only classified car running, handing him the win by virtue of simply taking the green flag.

Pat Long on his race 2 results:

“I thought that I had a 911 that was capable of winning all weekend. We went back and did our homework after our P3 qualifying position yesterday and we talked about how it was going to be to go out after IndyCar. The jury was out on if the clean race track and a lot of rubber was going to bode well for us. I think we all learned what the answer was going down into turn one. It was slick and it was just a train wreck basically, cars going in all directions. Luckily I was able to learn from my mistake yesterday and keep the car on the line and from there it was just clean air and I was able to reach the potential of what I thought the car had in it all weekend. We were running pretty hard. Johnny (O’Connell) had the capability of reeling me in when he had the pressure from Riberas in the Ferrari so I was actually pushing as hard as I could. I’ve been with Porsche for close to 15 years, I’m still a factory driver. The head of Porsche North America asked me what I wanted to do. I said I wanted to win this championship. I wanted to come in rested and hungry like the rest of these guys that I’m up against. We have more competition than ever this year.”

For the first time in years, Pat Long and Jorg Bergmeister will share a car again