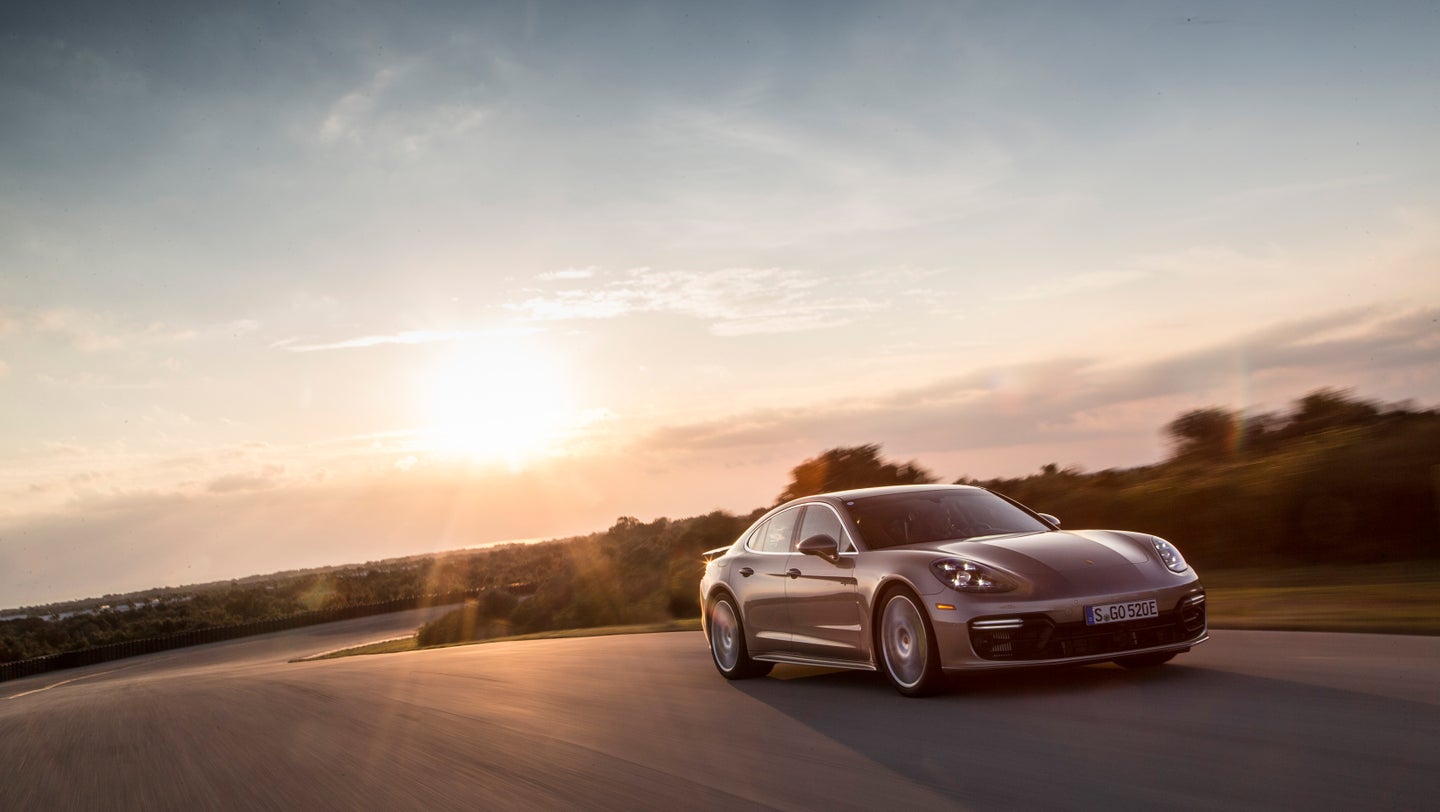 The new Panamera Turbo S E-Hybrid is about 700 pounds heavier than the current Panamera Turbo, and yet it is even more accustomed to life on the race track than its lighter cousin. This is a car that is utterly inelegant in its engineering, smashing physics with a giant sledge when a ballpeen would have sufficed. For years every single piece of literature on the topic has extolled the virtues of lightweight engineering to benefit on-track acumen, but with the PTSE-H Porsche has added a bunch of weight to increase speed. Hybrid for performance is a relatively recent concept, and Porsche has taken it to extremes with this hybrid super sedan.

Before the car was even announced to the public, Porsche invited a select few journalists to their giant Nardò test facility in Italy (Porsche owns that track, you know?). Sadly we were not among them, but there were a few great photos from the event, and we can sure glean some information from the pieces that each of the attendees wrote.

"Launch control propels us from the pitlane like a champagne cork, the smacking of skulls on headrests preceded by an engine blip-blipping on a momentary 3000rpm limit before short strips of rubber are laid.“ autocar.co.uk

"After an Adam’s Apple swallower of a launch-controlled launch from the end of the pit lane, the thing about the Turbo S E-Hybrid is that it simply never lets up. Thrust is brutal, instant and always available (…).“ evo.co.uk

"The Panamera jinked with a prizefighter’s cunning agility to post remarkable acceleration, cornering, and braking performance stats. Launch-controlled thrust topping an indicated 1.30 g slammed every head in the cabin into the backrests, on the way to 60 mph in barely more than three seconds. (Our testing has seen lesser Panameras sprint to 60 mph as quickly as 3.3 seconds.)“ caranddriver.com

"We sure hope that at least some buyers have racetrack club memberships because this rig digs track time. During a hot 2:52.2 lap of Porsche’s 3.9-mile Nardò handling circuit in Italy’s boot-heel with Porsche test driver Lars Kern at the helm (he set a 7:38.40 Nürburgring lap time in a Panamera Turbo last June) three passengers enjoyed decidedly unsedanly g-forces in all directions (…).“ motortrend.com

Porsche claims this hybrid monster will sprint to sixty in 3.4 seconds, but everyone in attendance claims it'll be faster than that, and certainly felt faster. Using launch control, for example, the PTSE-H managed to shove forward with four gents aboard at a rate capable of 1.3 G. That's some intense acceleration. We can't wait to get our hands on one.