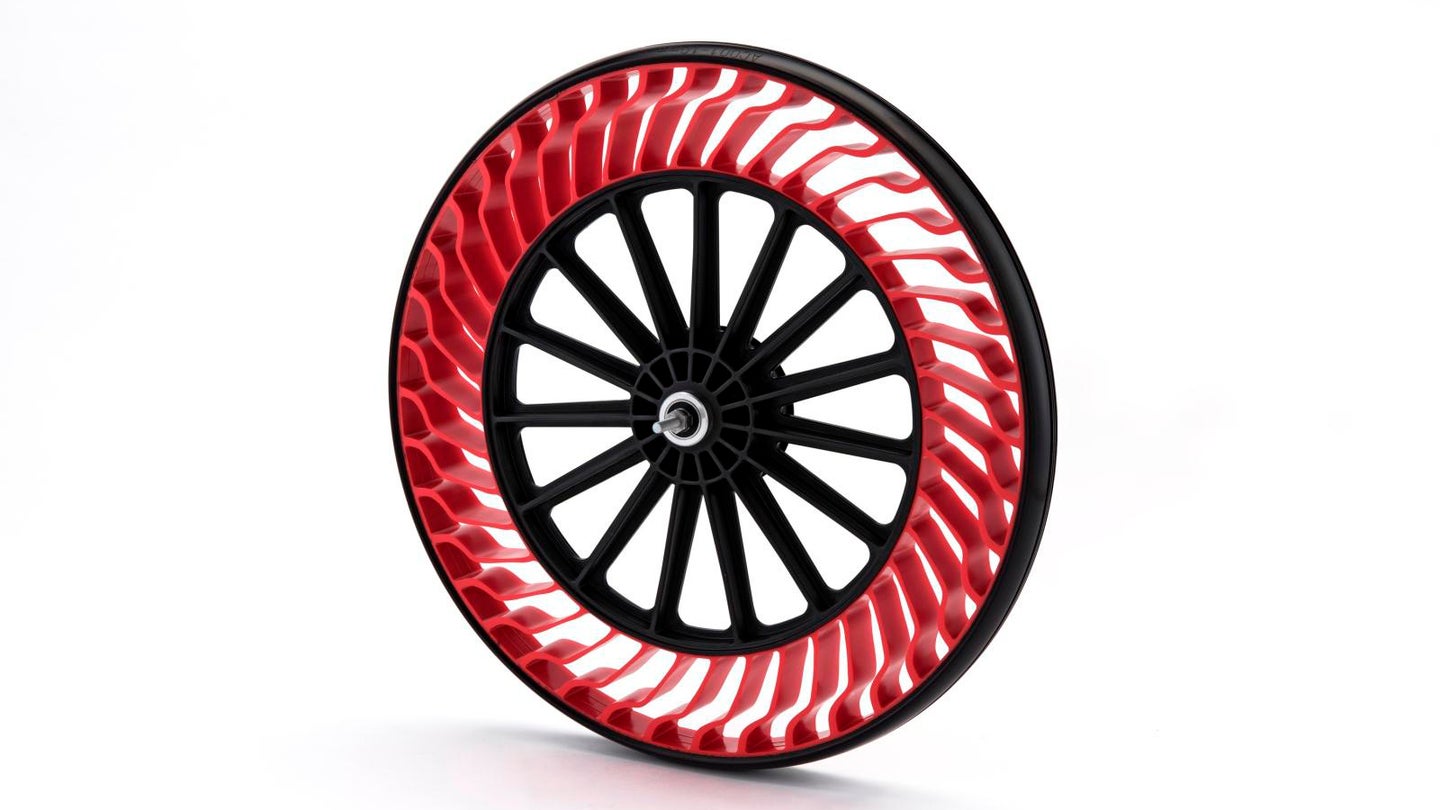 When it comes to tires, there are generally three things to consider—size, tread life and tire pressure. Once you've figured out the proper size needed and your new rubber has been mounted, keeping an eye on treadwear and tire pressure is a must for as long as the tire is on your vehicle. But what if you didn't have to think about under-inflating or over-inflating those brand new Pilot Sport 4S tires? Not only does Bridgestone think it's possible, it's actually doing something about it.

Airless tires aren't new, in fact, it was Michelin who first introduced them over a decade ago. These "tweel" tires are currently sold commercially for lawn mowers and golf carts. What makes Bridgestone's approach different then is two things: its unique design and its application.

First up is the design. Michelin's tweel design consists of flexible polyurethane spokes which support the inner rim. Bridgestone's design differs in that it replaces the inner tube and a portion of the wheel’s spokes with thermoplastic resin supports. This has been a long time in the making for the world's largest tire manufacturer. Bridgestone originally revealed their airless tire concept in 2011 followed by a second generation 2 years after that. Now it says it's finally ready for mass-market but there's a catch. It's not for your car and won't be ready for another 2 years.

Bicycles are what they're starting off with. Now before you leave, it's worth noting that the benefits of an airless tire are vastly increased in the case of the automobile. Those benefits include no more flat tires which, like having run-flats, means you won't need to carry a spare tire around. Ditching the spare means weight savings which translates to improved fuel economy. Bridgestone also claims a reduction in carbon dioxide emissions thanks to rolling resistance being virtually non-existent. These tires, which are made from recyclable materials, are also better for the environment.

Manufacturers want their airless tires to eventually be available for all cars. Until then, you'll need something with two wheels and a set of pedals to go airless—but at least you won't need an air pump.

Gearhead Deals : A Tire Package For The Long Haul

Warm weather allows for a treasure trove of savings for those who plan ahead on maintenance.

Is NASCAR Ready for a Tire Change?

A manufacturer may be waiting in the wings to replace Goodyear.