This is not recommended, but if you have no choice, here’s how to maximize your chance of a successful—and slow—journey. 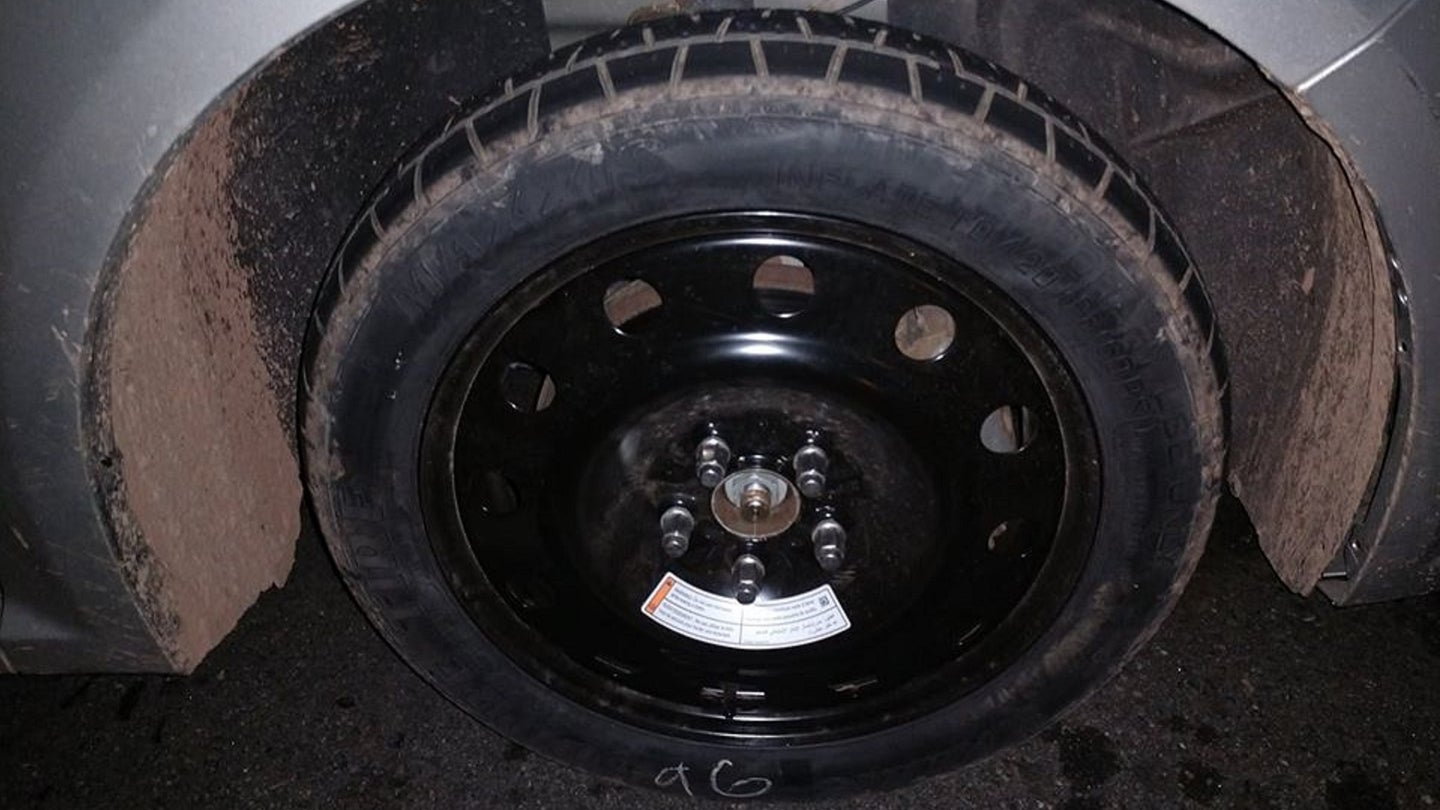 The Empire State Performance Rally was over for my wife Elana and me. After leading the sweep team for most of day one in her Ford Flex, we suffered a punctured sidewall on Special Stage 8. After borrowing a jack we managed to put our spare tire on, but it was a temporary space saver, and certainly not up to continuing the job of sweep.

It was Saturday night, too late for any tire stores to be open to replace our tire. Most would be closed on Sunday as well. Plus, a significant tropical storm would hit the area on Sunday, severe enough that even at the time this is published there are still thousands of people without power in New England. We didn't want to drive through that, especially on a temporary spare.

We also had a full set of four new tires in the garage at home just waiting to go on the Flex. If we could get home, we could throw these on and be all set. So with all these factors in mind, we decided to pack the car immediately and make a run for it that night.

The trip home would normally take just over four hours. But our little donut tire restricted us to a maximum speed of 50 mph, well below the posted limits, and even farther below the actual speed of traffic. But we figured it was a Saturday night, not a time when heavy traffic would be likely, so when we hit the highway I turned on the amber warning light we had used on rally stages, set the cruise control to 50, and stayed as far right as we could to allow the world to pass us.

I had also made sure the spare tire was properly inflated to a full 60 pounds per square inch. It was only 20 when I checked it, and like any underinflated tire it would have worn out quickly at low pressure. Unlike some spare tires, there was no maximum mileage printed on the tire or rim, so we hoped this would get us the 250 miles home if we remained within the limits the spare tire imposed on us.

Literally, thousands of cars passed us as we cruised down the right lane at 50 mph. Only a few honked or flashed their high beams at us, either unaware or not caring that we had a perfectly valid reason for driving this way. I half expected to get pulled over by the police, at least to make sure we were ok since we weren't breaking any laws. But that didn't happen.

We celebrated as we closed to within 100 miles of home. At that point, even if the spare tire failed we could call AAA and get towed home. A similar celebration occurred at 35 miles from home, where my existing roadside assistance would kick in. At no point did the car's performance take a turn for the worse. This was no time for thrilling heroics. Slow and steady would win this race.

And win this race it did. We got home around 11:30 p.m. Even after 250 miles the spare tire looked to be in excellent shape. Miraculously we found a Firestone store that was open on Sunday and able to mount our pre-purchased tires for us. That happened Sunday, and the Flex was once again fully operational. It's just as well we got it done Sunday. The tropical storm hit that night, and the entire area was flooded Monday morning.

We would certainly not recommend you do what we did. Even though our temporary spare made it fine, they're not designed for long road trips. If you do need to maximize how much life you get out of it, then do what we did—check the pressure, inflate if needed (it probably will), and respect the maximum speed printed on the sidewall. That, plus a solid helping of luck, is how we did it.

Elana is now looking for an extra full-size wheel to mount one of her old but still good tires on. With a full-service spare we won't have to worry about limping home like this again. And don't get me started on modern cars that come without spare tires. With our sidewall puncture, a fix-a-flat kit probably wouldn't have helped, and we would have been well and truly screwed—pun fully intended.

But it’s not a picnic-mobile: the 3.5-liter EcoBoost V6 packs more than just lunch.