A Celebrity Apprentice appearance leads to ire on both sides of the political spectrum, a PR guy out the door, and Kawasaki in the middle. 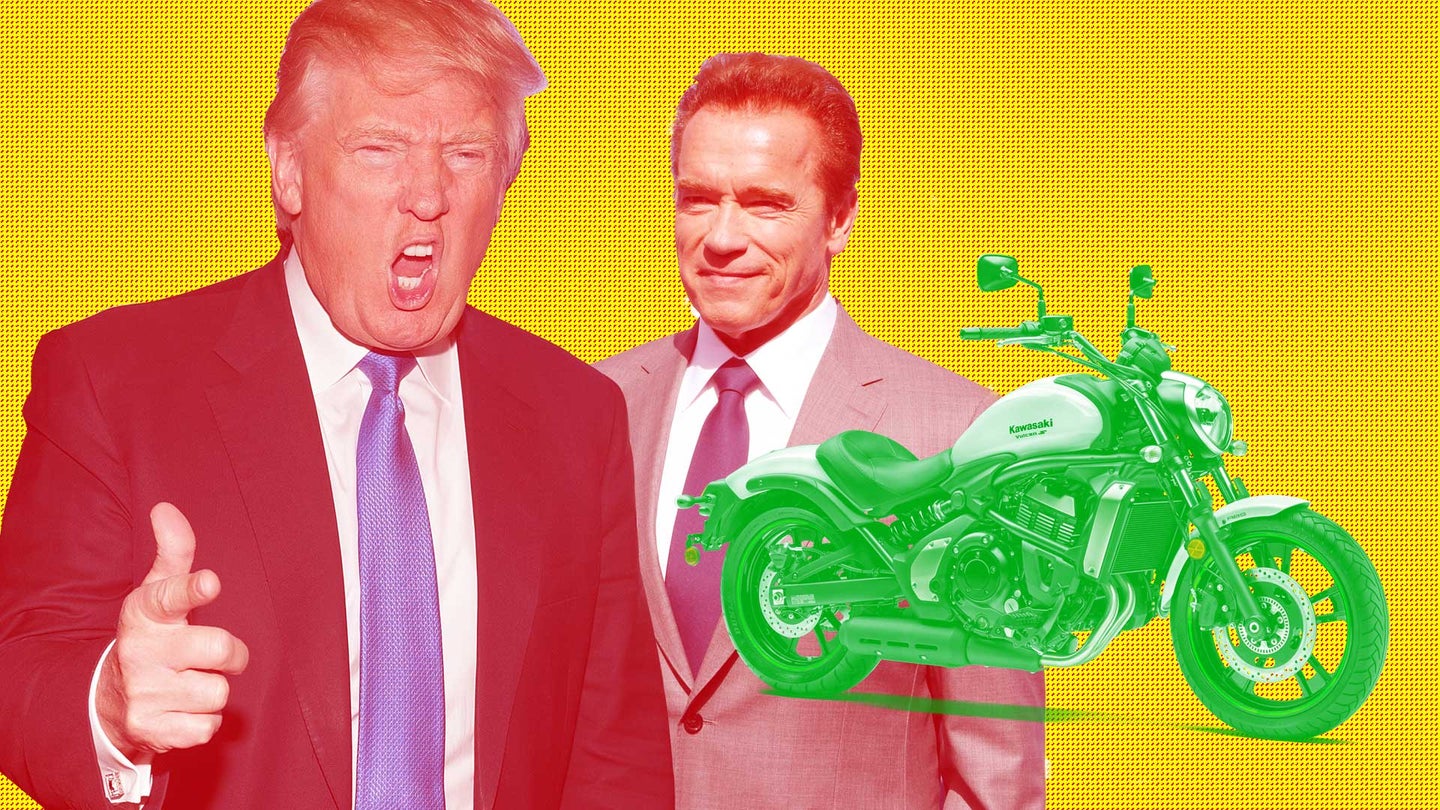 On Wednesday, Kawasaki PR Manager Kevin Allen offered to pick up a new Z650 motorcycle from my place in Los Angeles. On Thursday, a call to his cell phone went straight to voicemail. In that short a time and in an almost overwhelming fashion, Kawasaki felt the wrath of both sides of our polarized political spectrum, and Allen had resigned.

The heart of the matter was a segment of NBC’s Celebrity Apprentice, hosted by Arnold Schwarzenegger and executive produced by President Donald Trump. In the season’s third episode, the cast competes over a marketing campaign for Kawasaki’s Vulcan S. Not bad work after painful segments featuring grape juice and barbecue sauces in a prior episode. Either way, it’s the kind of catchphrase-laden forced product placement that would, under any other circumstances, scarcely raise an eyebrow.

But, because of the continuing involvement of President Trump in the show, Kawasaki quickly faced the same kickback as L.L. Bean and Breitbart News, landing on activist group #grabyourwallet’s list of companies to consider boycotting. It was into this breach that PR Manager Allen stepped, saying to Reuters:

"The concerns from our own customers, as well as the #grabyourwallet campaign did seize the attention of our executives,"

And that the company was being asked:

"How could we support a show that was essentially created by Mister Trump and who was still involved?"

The #grabyourwallet campaign placed Kawasaki back in their good graces after a company spokesman sent them the message:

“we would not elect to sponsor the show again so as long as Mr. Trump is involved, including as an Executive Producer.”

Kawasaki’s dumping of Celebrity Apprentice received a quick hit of media attention. It also raised waves across social media. By 8:30 am on the morning of the 18th, praise started rolling in on Kawasaki’s Facebook page from #grabyourwallet fans. Just an hour later, the swell started to reverse.

Kawasaki seemed to pivot with the tide. Soon after the company started to take real heat on their Facebook page they released a statement saying

“Recently published comments relating to The New Celebrity Apprentice and President-elect Donald Trump's involvement in the show attributed to a Kawasaki employee are a misrepresentation of the company's position and the employee is no longer with the company.”

The reversal seems to have stuck. Reuters followed up their original story with one calling Kawasaki’s reaction “Murky.” Meanwhile, the goodwill continued with commentator and former Labor Secretary Robert Reich tweeting the original news, as posted at Fortune.com, which syndicated the earlier story Reuters. Taken together, a damned mess, and one that sent Allen, a PR guy with a young family, packing. Allen, diplomatically, is keeping quiet.

Riding through the Kawasaki employee lot in Foothill Ranch is an instructive experience on working in a big Southern California company—especially one with motorsports roots. There’s a little of everything parked around the campus, from big, gleaming Audi sedans to dirt spattered Ford pickups. Similarly, a multitude of political bumper stickers fade away together under the California sun.

From outside, Kawasaki seems like a little of everything and everyone under one roof. Distant from the firehose of wrath that is today’s internet. Too innocent or indifferent a target for the whip-fast scorn of social media, where the President-elect might engage a local union leader, or a restaurant critic, or a car manufacturer, or a country. Until yesterday it seemed like the kinda place where you could agree to disagree, and then go ride motorcycles.

But things have changed. Everyone and everything, it seems, is a political target. Ralph Lauren is taking heat today for dressing the First Lady. Ford was pressured for its foreign vehicle production. Even if you're clinging as hard as you can to political neutrality—or maybe especially if you are—you just can't tell anymore who's going to be the next to take a shot.