Nobody Walks in LA? Let’s Fix That

We’re going to walk across it today. 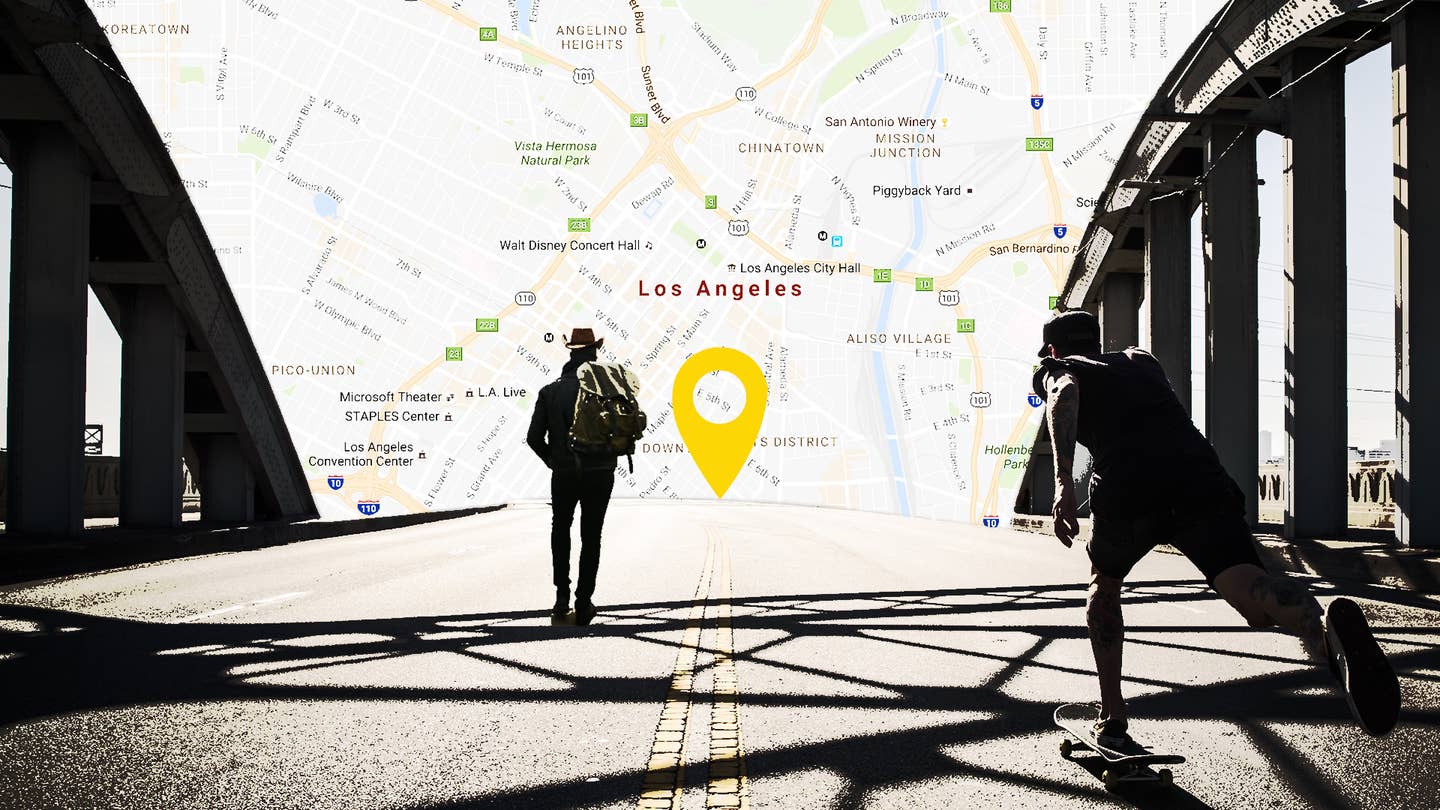 Los Angeles reaches its tendrils over 500 square miles of Southern California, from the Port of Los Angles and San Pedro on the coast, way up to Sylmar in the baking-hot San Fernando Valley. Bel Air, Chinatown, Watts, Westwood, and Reseda—it’s a city made for the car. Purpose-built for it, really.

Nobody walks in LA.

It's a casual toss off, because any decent description of Los Angeles gets around to sprawling eventually. Fair enough, but at its middle, Los Angeles is wasp-waisted. Just 17 miles from one side to the other. Walkable. Maybe.

It's easy to miss the early morning social clubs if you’re not an early riser. Dog walkers, coffee drinkers. Nobody walks in LA?  The comment is willfully ignorant of thousands of healthcare workers and cooks and housekeepers that use their own two feet to finish early morning bus trips. The regular march of walkers ascending the Culver City Stairs or Runyon Canyon like ants, for their hearts or their waistlines or for the view. The postal workers that fan out across town, too. They walk six miles a day, maybe more. And our thousands of homeless regularly trod from Skid Row to Venice. Even in the worst heat of summer, old Korean ladies in visors walk around K-Town parks for exercise, and popsicle vendors push their carts down Pico.

Yeah, people walk in LA. Tomorrow, that'll include me.

I'm not especially fit, or even a dedicated walker. Just a guy that wants to tip his hat to a walkable city that doesn't get its due. So I'll stroll right through the thin middle, Atwater Village to Venice Beach. The city limit sign to our natural boundary on the ocean. I'll send updates here, and make the occasional appearance on Facebook Live as I walk West, starting at 6:30am PST, 9:30 EST. It'll take a while. I hope you'll keep me company.

Everything I'm taking with me. Well, except for my phone. It's a guess based on... I don't know, hiking sometimes and things I've overheard. This isn't a regular thing for me. I'm as average as they come, in my early 30's and every day a little softer around the middle. I had a beer with dinner and a stiff drink before bed.

Food? Water? I'll buy it as I go. Painkillers? They're my reward for making it.

Here's my route, or something like it anyway. I'm imagining a detour or two along the way. Looks totally doable on the map, right?

Also, I'm certain it'll take longer than six hours. I'll be stopping for breakfast and lunch along the way.

LA folks, any suggestions along the way?

Interstate 5 from the landmark Hyperion Bridge. On a morning like this? I'm glad I'm walking.

And just a few feet down the road there's a pretty Nash parked in a front yard.

Just 45 minutes in, but happy with my pace and progress. Even happier with the car spotting along Hyperion.

Made Sunset Blvd. Silverlake is famously packed with great metal. Just walked past a great Scout and a bitchin' VW truck.

An hour in. Feels great. Just dodged my first idiot. Fella driving an F150 was more tuned on to his mobile phone than the stop sign. It's the same every time I stand around at an intersection for a minute. Every driver's head bows like they're in prayer.

Near Melrose and Vermont. This city is just stacked with International Scouts.

A fellow walker passes by in front of the Bowling Association. I can hear the freeway now. Sounds like wind.

Self portrait at the Hollywood Freeway underpass.

Little iconic glimpses of LA are popping through the smog as I work my way into Hollywood. The Griffith Observatory. The Hollywood sign.  The sun's at my back and the city is starting to warm up. I can feel the heat radiating from the asphalt on Melrose now.

I've stopped for breakfast at Mesón Cafe. A pretty little spot on Western.

It's amazing where a few steps take you in Los Angeles. Just a minute ago I was looking up at the minarets of a Ukrainian Othodox church. With a left turn on Western, I'm basking in the shade of a Korean Buddhist temple.

Back on the road, heading down Western toward Koreatown, past wild art stores and knick knack shops.

Turned right on Beverly. I've always admired this sign and never stopped to take a good look or grab a photo.

Even at my walking pace the scenery and neighborhoods change so fast I almost can't keep up. Hancock Park is old money LA. Big houses with thick walls. Wide, quiet streets. Old trees. It almost looks like suburban Chicago, or Grosse Pointe. Perfect for walking.

Three hours in! Still feel great. Even better than before breakfast. Coffee is a hell of a thing. My feet are just beginning to catch on that I'm up to something. More enamoured with Los Angeles than ever.

Realized that all the good car spotting came to an end as soon as I hit Hancock Park. It's all Camrys and Pilots and A7s here. In LA, as anywhere else, the more polite the neighborhood, the more boring the cars.

Rimpau and 6th. One of my favorite intersections in LA. Heading west on 6th, you're going up a slight incline, most go nearly freeway speeds, then climb all over the brakes for the surprise hard right-hand turn on the other side of the intersection. A spectacular show, but I'm moving on.

The Farmers Insurance building on Wilshire and Rimpau. I'm just a mile or so from my home in Mid City.

You never think about all the hills in LA when you're driving. They're subtle. And paved over too. They have been for generations. But walking across town you get to know every one of em. It's hot, and I'm grateful for all the old shady trees pushing up the sidewalk. Every bit of shade matters.

I'm in my neighborhood now, and it's unexpectedly emotional. Like I'm coming home after a month away. It hasn't even been four hours.

But the old cars. The body shops. Roscoe's Chicken and Waffles. Lucy's 24hr taco shop. It's where I walk the dog and buy groceries and catch up with neighbors. It's home.

The last right turn I'm going to make for a long, long time. Venice Blvd. will take me all the way to the beach. It's a giant street lined with Mexican joints and old clunkers and the fantastic little mom and pop car dealerships endemic to LA. It's also thin on shade and fellow pedestrians

Street art pops out of surprising places. Venice is my way home I've traveled this stretch between the 10 freeway ans my home a million times and never noticed this portrait.

There's a sub-culture of transient RV dwellers in LA. They're hearty folks of all ages and races. Lots of them live along Venice, where there are no city street sweepers to roust them, parking 72 hours at a stretch in their beat-up old Winnebago's. They might be walking a thin line between homelessness, but it doesn't seem half bad.

Four and a half hours in and the first sea breeze just hit me at Fairfax and Venice. Happiest headwind I've ever felt.

Five hours in. Couldn't be happier.

Lunch, right along the edge of Culver City.

Los Angeles is a checkerboard of neighborhoods and municipalities. Some, like Culver City and Beverly Hills, are completely enclosed by the city of LA, yet they've got their own police and fire departments, their own city governments. For the newcomer, it's tough to sort out.

Still, the patchwork and changing street signs are a great reminder that the Los Angeles we know now, the sprawling megalopolis, was once a cluster of distinct towns. The gaps between towns might have been filled in long ago, but each neighborhood still maintains it's own personality.

And there's no better way to get to know a neighborhood than to walk it.

I'm back on the road. My legs stiffened up something fierce at lunch. Stretching them out feels great. Also, indicative of some pain to come.

Six hours feels like a lifetime. Not because it's challenging, or dull. I've just seen so many things and have so many new landmarks to measure time by.

One of myriad little car dealerships scattered across Los Angeles.

My walk started near the old Pacific Electric Red Car line in Atwater Village. Sixty years after abandoning the rail system for freeways, Los Angeles is back to light rail. The new Venice overpass is part of a line that started service to Santa Monica just this year.

I can't explain it, other than to say it's worth going out of your way for.

I love these old car washes, and I hope they never go away.

Every now and then the sidewalk just gives up.

It's lunch time in a busy part of the town. I have more company than I expected on the sidewalk. That's the Sony water tower off on the horizon.

My walk is put to shame by the professionals.

Seven hours in, just passing under Interstate 405. The last of the big freeways on my walk.

A very, very welcome sign that I'm closing in on the beach.

LA's mid-century signs deserve a coffee table book. Some neighborhoods have great cars. Others great architecture, or restaurants. Every single neighborhood, all 15 or so miles I've walked, has had fantastic signs.

You know the big surprise? LA's streets are a lot cleaner than I expected. Especially after a long, unwashed summer. There's refuse here and there. But Los Angeles used to be so filthy it looked like blowing plastic bags had replaced tumbleweed.

Stopped for coffee at Deus. I can smell the beach. Kawasaki's PR guy Kevin Allen was passing through Venice and he introduced me to Kushatani's Mike Ngo, who was toting around a leather jacket made for racing legend Gary Nixon.  Only in LA.

Walking along the Venice Canals now. Maybe 10 minutes from the beach.

People walk in LA.  The Venice Boardwalk. Just feet from the beach now.

My feet are in the ocean. This has been an amazing experience. Do it. Here. Wherever you live. Put on a good pair of shoes. See where you wind up. If it's warm sand and cold water, so much the better.

I need a beer.

Tesla to Open Tiny Showroom Inside a Nordstrom in Los Angeles