A city's battle to take back its streets from the streetwalkers, one illegal turn at a time. 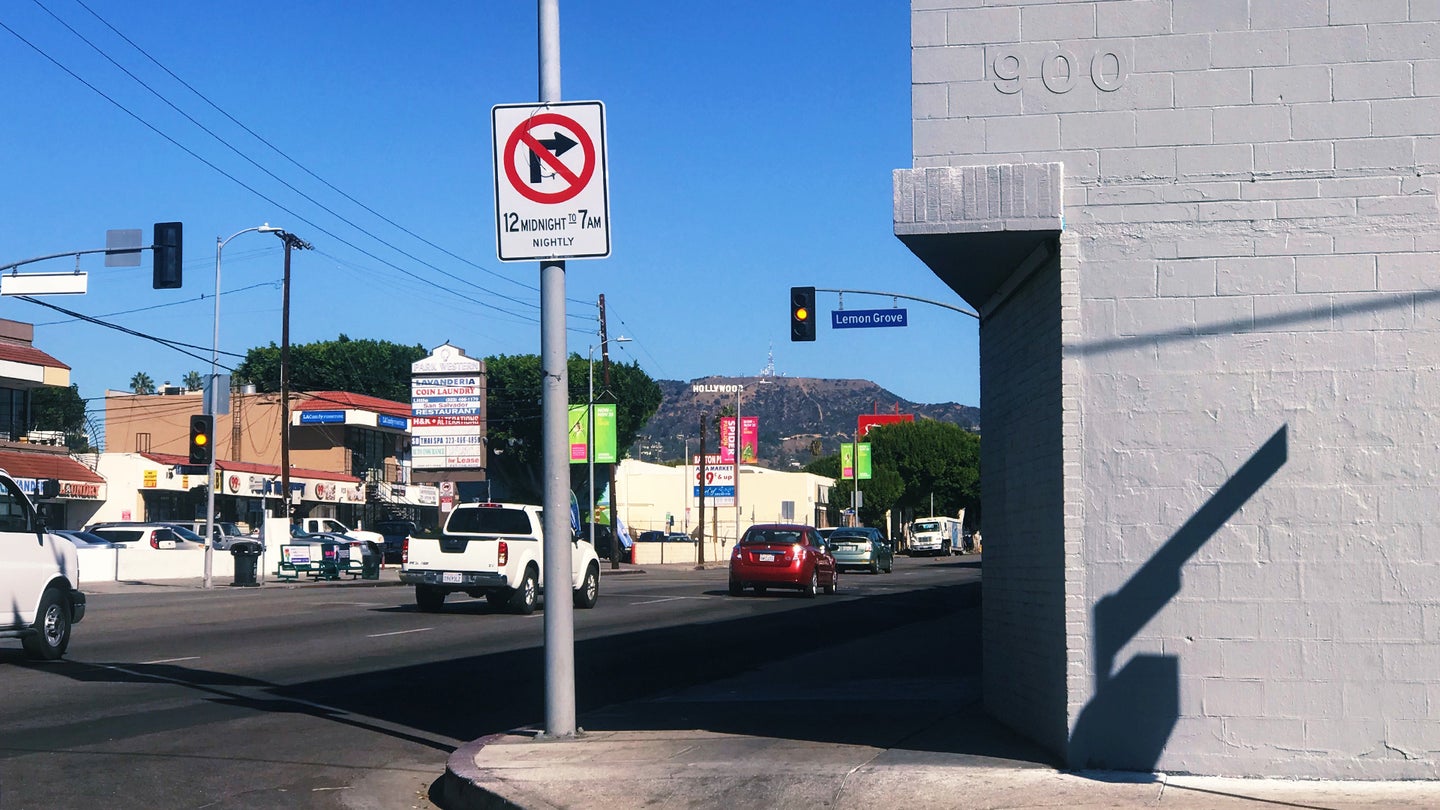 Stand on the corner of Marathon Street and Western Avenue, a few miles west of downtown Los Angeles, and you'll see two signs. The first, instantly recognizable, is the giant, gleaming HOLLYWOOD perched on a nearby hillside. The second, bolted just out of reach on a street lamp, reads: NO RIGHT TURNS 12 MIDNIGHT TO 7AM NIGHTLY.

The former is iconic, a shorthand for strangled ambition as much as wild fame; the latter is the manifestation of an obscure local traffic law. But the story of that traffic sign—the only one of its kind in the country—is as dark and seedy as anything dreamed up by Otto Preminger or Billy Wilder.

The northern end of Western Avenue, one of roughly a billion streets in LA's concrete quilt, runs just five miles, from I-10 up to the wrinkled edge of the Hollywood Hills, crossing Koreatown and East Hollywood in between. By day it's a working roadway lined with anonymous strip malls and auto body shops. But at night, even in our on-demand age of hookup apps and "Uber for escorts" start-ups, Western is home to one of the biggest street-prostitution corridors in the country. This is where Los Angeles is trying to fight back in a unique and bizarre way: by banning right turns onto residential streets at night.

Perhaps it's no surprise that streetwalking persists here. The city's proximity to the border makes it a major hub for human trafficking, the city's inexorable relationship with the car means most Johns have a means of conveyance, and even though it's the most populous county in America, its endless street grid offers countless dark alleys and unwatched corners. Add in the same housing crisis that has decimated many other metropolises—plus Hollywood's appetite for dashing dreams and stranding the dreamers—and you're left with a perfect storm of desperation and predation.

But the situation here is remarkably bad. The corner of Marathon and Western is just a 20 minute-drive to downtown and thirty to the beach on a good day, and just ten minutes from the artisanal boutiques and yoga studios in pricey neighborhoods like Los Feliz and Silver Lake. It's also where, in October, police made five separate arrests of men attempting to solicit a prostitute in a single night.

That a problem of this magnitude could be brought to heel with an obscure traffic fix—that is, making it illegal to make a right turn, off a main road, at night—seems bizarre. It seems like something that would be unpopular with residents, not to mention completely off the mark as a fix; a weird sort of butterfly-effect legislating.

Mayor Eric Garcetti's office, when contacted, was unaware the signs existed. But working the rolodex of local-government bureaucracy introduced current and former officials who were adamant that the peculiar traffic violation has been an important tool for reducing the flow of Johns into the area. A look at the data shows they might actually be right—but, as always, the truth is more complicated than a set of numbers.

Down on Main Street

Tom LaBonge has seen the city through some rough patches during his sixty-odd years, but even he was surprised at how street prostitution surged at the beginning of the decade—2011 wasn't quite as bad as the mid-Seventies, but it came close. By that point, LaBonge was a city councilman representing Los Angeles's 4th District, which encompasses a large chunk of Western Ave.

Each night, as the side streets slid into shadow, women emerged and cars slowed and a quick, frictive commerce ensued. LaBonge's office fielded hundreds of complaints from residents. It wasn't just that people out walking their dogs or taking their children to school early in the morning confronted a barrage of four-wheeled peep shows. The trash left behind—used condoms, litter, needles—had a rotting effect on the neighborhood.

Graying, genial and deep-voiced, LaBonge earned the nickname "Mr. Los Angeles" over his four decades in local government. He talks about the city like the mayor of a small Midwestern town: proud, knowing, always hunting for connections. He retired in 2015, term-limited but still tireless. He cares deeply about clean streets.

"It’s about respect for the neighborhood," he said as we drove up Western in his black Ford Escape. "The 'Broken Windows' theory got kind of thrown out because it got too aggressive in a lot of ways. But to me, it really is about the physical appearance of the neighborhood. If it looks like shit, it will be like shit."

Skid Row is one of LA's most despondent areas, a notorious downtown neighborhood that's been neglected for decades and shows every second of it, home one of the largest homeless populations in the country—more than 5,000 people camped out in less than half a square mile. To stop Western Ave from becoming an unofficial containment zone for prostitution, LaBonge turned to the Los Angeles Police Department's Olympic Division, whose vice squads were already working around the clock to keep up with a "never-ending supply" of workers, clients, and pimps.

To the local politicians, the residents, and the media, it looked like a losing battle. But LAPD Officer Joseph Pelayo had seen this all before.

In California, both the buying and selling of sex are illegal under the same law: Penal Code 647(b). This code also states that no services need be exchanged or agreed upon for police to arrest someone; an offer or request is enough. There's another statute that targets loitering with the intent to commit prostitution, and getting caught in the act considerably ups the ante for both parties, but 647(b) is the main tool the LAPD uses to arrest both sex workers and would-be customers.

Pelayo worked vice in Hollywood back in the late Nineties. He spent a lot of time on Sunset Boulevard—another one of the city's "major tracts" for street prostitution, as he puts it—walking the beat and getting to know the area's frequent fliers. With the problem at a high-profile low point (remember Hugh Grant?), Los Angeles first tinkered with traffic-based policing, banning left- and right turns from Sunset onto side streets at night.

The idea was to discourage people from picking up a prostitute and pulling into a residential neighborhood to transact business. There's another layer here, too, according to Pelayo, who said the law gave police probable cause for a traffic stop, since plenty of people at first ignored the signs. He added that such violations are especially useful for regular patrol officers, who might not have the training or experience to spot the signs of a potential sex-work transaction.

"We used to stop cars all the time with the signs in Hollywood. The majority of the time it was residents, but now and again we’d hit someone who picked up a prostitute and catch them in the act," he told me. "Now, they’re probably not going to stop somebody by themselves. This is more if they see someone pick someone up on the main street and turn off of it, to add to the probable cause for a stop."

More to the point, Pelayo said, it worked: arrests went up and activity went down. Now the Senior Lead Officer of LAPD's Olympic Division, he acknowledged that it might seem like an strange tactic to some, and that not all residents were thrilled with driving an extra minute or two out of their way to make a legal turn. But neither fact dissuaded him when LaBonge's office came calling.

"I remember, I drove right over there to take a picture of the signs to show Tom LaBonge," he chuckled. "I said, 'We need to put these up. This is what we need.'"

In Search of a Happy Ending

In early 2012, with prostitution on Western at a peak, LaBonge's office and the LAPD hosted two community meetings where they presented a variety of ideas for turning the tide, including the prohibition of right turns at night for a mile-long chunk of Western. A local news blog reported the "overwhelming majority" of attendees supported the idea. After churning through all the requisite municipal machinations—traffic studies, council motions, a formal request for funding—the signs were installed by the Los Angeles Department of Transportation a few months later.

The data shows arrests for prostitution along Western soared in response: 707 in 2012, compared to 401 a year prior, and just 277 in 2010. The numbers dropped a bit over the next few years, but enforcement barely slowed. It wasn't until 2017 that arrests fell to pre-2010 levels. (It should be noted that those figures don't definitively prove the overall efficacy of the signs, since the raw numbers don't indicate whether an illegal turn was involved in individual arrests, and the signs were just one part of a multi-prong policing approach.)

Pelayo believes the signs were effective. He points to how the right-turn prohibition has since spread to most of Western from the original one-mile stretch, as well as other troubled parts of the city. But he also acknowledges that an inventive moving violation simply treats the symptoms of prostitution, not the cause.

"It’s worked, and it hasn’t worked. It’s worked in the sense that that activity went away for a bit, but it’s since come back somewhat. It also just goes elsewhere—you get strict in one area, and it goes a couple miles south," he said.

"Still, it used to be really bad. It was so bad, you could just drive down the street and watch all the activity."

LaBonge agrees that things have improved markedly along Western (the occasional five-collar night notwithstanding). He also noted that the signs have stopped random people from cutting through sleeping neighborhoods on a GPS-directed shortcut.

The Show Goes On

On the surface, Pelayo's description of how these traffic signs spread is proof of concept: officials watched the prostitution numbers drop in the trial area along Western, then looked to replicate that success. But in an age where sex is increasingly bought and sold online, Western Avenue can be seen as less a victory and more a stalemate. Street prostitution remains rampant elsewhere, especially in farther-flung tracts and under-policed areas like Compton and South Central. There's been no talk of expanding the no-right-turn law in any significant way. Out of sight, out of mind.

Rather than a turning point in LA's war on street-level prostitution, these signs represent an uneasy truce with a perniciously adaptive underworld. They're not without benefit—especially for residents—but absent the real work of addressing the larger systemic issues at play, it's little more than a band-aid: quick, cheap, and wholly superficial.

Weaponizing a quirky no-right-turn law in the battle against streetwalking is an inventive and canny tactic, but human ingenuity will always play catch-up to human desire, and prostitution is the world's oldest profession for a reason. The sad truth is that this kind of enforcement literally kicks the problem down the road for some other precinct to deal with. Faced with such an impediment, the seedy, undesirable traffic—and the trafficked, and the traffickers—simply finds another route: down the road, across the street, and ever deeper into the night.