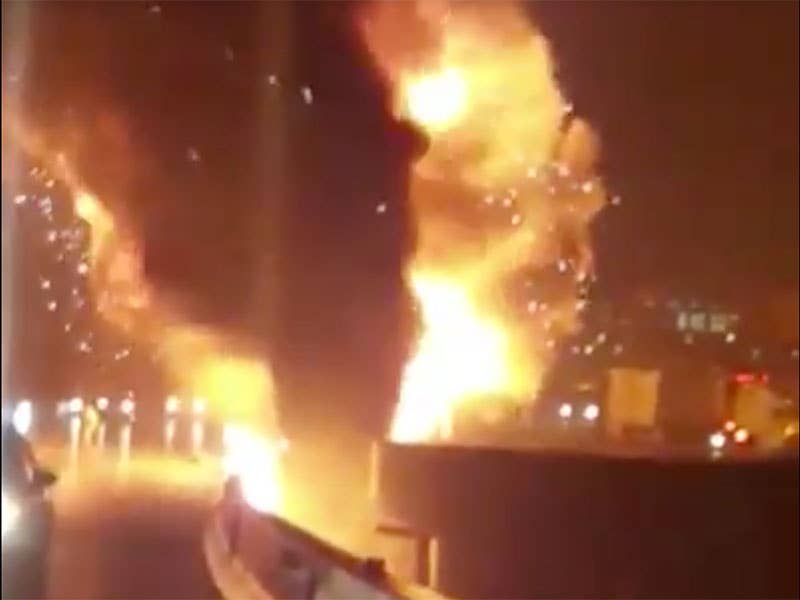 Two people were killed and 15 injured in a 67-car pileup and a hellish explosion Saturday morning on Interstate 95 in Baltimore, reports said. A video captured by a bystander near the roadway shows some of the worst of the highway havoc.

The crash occurred around 5:30 a.m. Saturday. As the cars piled into one another, a tanker truck struck a barrier on an overpass, flipped off the highway, and landed on railroad tracks below, causing a fiery explosion, The Baltimore Sun reported. The bystander's video, shared to Facebook Saturday morning, managed to capture the moment of the explosion from an almost-too-close viewpoint.

Following the tanker's explosion, tractor-trailer after tractor-trailer can be seen sliding into the fiery abyss. All told, the video chronicles nearly five minutes of car crash terror.

"This is the worst accident that we've seen," said Baltimore mayor Catherine Pugh, according to Buzzfeed News.

Another person was killed in an accident on the same highway roughly an hour before the massive pileup, when a man running from the scene of a crash fell from an elevated highway to his death, The Baltimore Sun reported.

The accidents came in the midst of a blast of wintery weather across the Northeast over the weekend, causing terrible travel conditions across the Baltimore region. As of Saturday evening, around 143 flights were canceled at the nearby BWI Thurgood Marshall Airport; regional gas public service company Baltimore Gas and Electric Co. claimed nearly 7,000 customers lost power in central Maryland; and Baltimore police had responded to more than 200 car crashes.