There’s plenty of vaporware in the Gold Rush electric vehicle market. But this one’s probably legit. 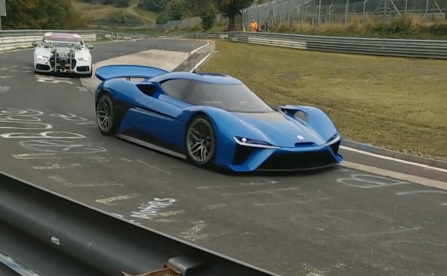 There's currently no shortage of optimistic electric car startups, but it looks like Lucid Motors (neé Atieva) NextEV actually has the credentials to pull off something big. Consider the all-star roster of execs. Martin Leach, erstwhile Ford Europe COO, is co-president; head of R&D and global development is former Cisco CTO Padmasree Warrior. NextEV has real money, too. There are the requisite Chinese backers, plus Sequoia Ventures and Joy Capital, accounting for over $1 billion in financing. The headquarters is in Shanghai, the design studio in Munich, and software development in San Jose, with additional satellite operations in Beijing and London. NextEV counts ex-Tesla and Italdesign Giugiaro employees among its engineering ranks, and a Formula E team at its disposal.

Basically, all signs point to one thing: These guys are not screwing around.

Still, NextEV has been flying under the radar. In the Gold Rush landscape of electric vehicle startups, everybody’s a vaporware suspect. But NextEV’s international OEM-style corporate sprawl, and flush boardroom, makes it seem more legit than others. Ditto the company’s hesitance to feed the hype machine. After all, if you’re actually building the bomb, discretion is an asset. (Oppenheimer publicity tour, not a thing.)

What we do know: The company is developing a hypercar. It’s aimed squarely at beating up on the LaFerrari and McLaren P1, thanks to one-megawatt of juice. That translates to 1,360 horsepower, and a 0-62 mph time under three seconds. Low-volume initial production run, heady $1.5 million price point. NextEV has said it plans to unveil the car this year, possibly next month.

Originally posted at Bridge to Gantry, this new footage of a mysterious, silent exotic trundling around the Nürburging, trailed by an Audi A7 camera car, fits the bill. We’d guess this is NextEVs maiden model, filming B-roll for its official press reveal. It’s a short clip, but crisp and out in the open. The styling is a decided mix of new Ford GT and old Lexus LFA.

So, if this is the NextEV hypercar, does it get a Hell yeah! or go in the Meh bin? Comments section below.