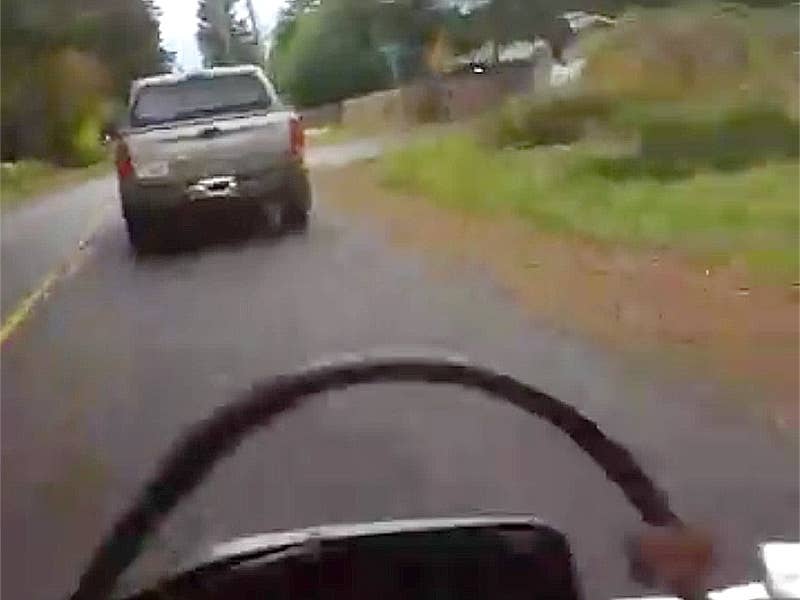 Now there’s a formula for viral fame. When Washington resident Aaron Babcock’s truck was stolen on October 8, he did what we all would like to imagine we’d do in such a situation: He took off after the thieves on his dirt bike.  In a distinctly 21st Century twist to this Charles Bronsonian act of badassery, however, Babcock also made sure to broadcast the entire encounter on Facebook Live.

Based on some of the statements he makes in the course of the video, we’re guessing Babcock live-streamed his pursuit not in an attempt to show off how tough he is, but as a way to try and summon help. (The video, for what it’s worth, is simply entitled “Help”.) He repeatedly asks viewers to call the police on his behalf, and expresses his concerns about the thieves turning down a one-way road while he’s still in pursuit.

For the most part, Babcock seems content to maintain a wary distance from the stolen vehicle and wait for the police to find him, though he does seem to debate more drastic measures. “What’s the laws about pulling them out at gunpoint?” he asks the camera at one point.

While Babcock wasn’t able to tape the moment when the criminal masterminds pulled over and surrendered, he did captured the aftermath in a second Facebook Live video. As the clip kicks off, the apparent thieves—who Babcock, both in the first video and in the comments of the second, claims to know—are lying on the ground, an armed police officer standing watch over them.

The Drive has reached out to Babcock for additional information about the pursuit; we'll update this story if we hear back.