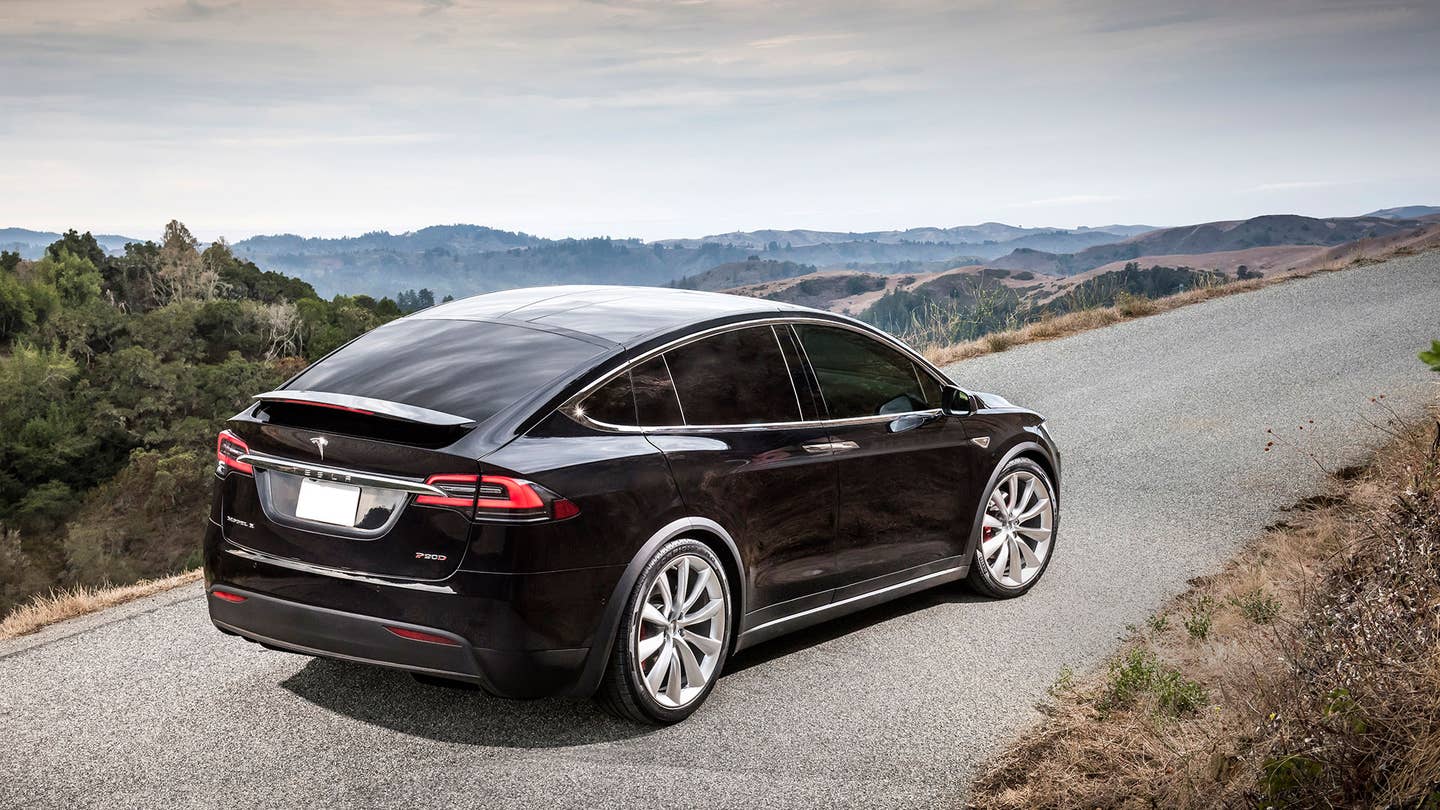 Better start preparing yourselves for another Twitter rant from Elon Musk: reports have come out refuting Tesla's claims that the Montana Tesla Model X crash was due to driver misuse of Autopilot. The SUV operator released an open letter to Tesla Thursday stating that he used the system correctly and that the car never warned him to take control as the company claimed.

The disputed crash occurred on Route 55 in Whitehall, Montana on July 9th and involved a Model X driving through into a guardrail after striking 20 wooden supports. The car was severely damaged, but both occupants survived. Since the crash, the driver, calling himself "Pang," has claimed he had Autopilot engaged and that the car drove itself into the guardrail with no warning chimes.

In a statement provided to Electrek, Tesla wrote that data collected from the wrecked Model X showed the driver likely did not have his hands on the SUV's steering wheel for over two minutes, which is exactly what the car tells you not to do Autopilot is engaged. The company also stated that as road conditions worsened, the vehicle told the driver to take control but was ignored, leaving the Model X to drift dangerously off the road.

In response to this, the owner wrote an open-letter stating the Model X did not warn him to take back control of the car before the crash. The driver also wrote that the car did not slow itself after striking the first wooden piece of the guardrail, and that it continued to drive itself through several more before he was able to stop the vehicle by himself. The owner writes that Tesla did not bother to reach out to the driver following the incident.

A Public Letter to Mr. Musk and Tesla For The Sake Of All Tesla Driver’s Safety

From my friend, Mr. Pang, a survivor of the Montana Tesla autopilot crash

My name is Pang. On July 8, 2016, I drove my Tesla Model X from Seattle heading to Yellowstone Nation Park, with a friend, Mr. Huang, in the passenger seat. When we were on highway I90, I turned on autopilot, and drove for about 600 miles. I switched autopilot off while we exited I90 in Montana to state route 2. After about 1 mile, we saw that road condition was good, and turned on autopilot again. The speed setting was between 55 and 60 mph. After we drove about another mile on state route 2, the car suddenly veered right and crashed into the safety barrier post. It happened so fast, and we did not hear any warning beep. Autopilot did not slow down at all after the crash, but kept going in the original speed setting and continued to crash into more barrier posts in high speed. I managed to step on the break, turn the car left and stopped the car after it crashed 12 barrier posts. After we stopped, we heard the car making abnormal loud sound. Afraid that the battery was broken or short circuited, we got out and ran away as fast as we could. After we ran about 50 feet, we found the sound was the engine were still running in high speed. I returned to the car and put it in parking, that is when the loud sound disappeared. Our cellphone did not have coverage, and asked a lady passing by to call 911 on her cellphone. After the police arrived, we found the right side of the car was totally damaged. The right front wheel, suspension, and head light flied off far, and the right rear wheel was crashed out of shape. We noticed that the barrier posts is about 2 feet from the white line. The other side of the barrier is a 50 feet drop, with a railroad at the bottom, and a river next. If the car rolled down the steep slope, it would be really bad. Concerning this crash accident, we want to make several things clear:

r1. We know that while Tesla autopilot is on but the driver’s hand is not on the steering wheel, the system will issue warning beep sound after a while. If the driver’s hands continue to be off the steering wheel, autopilot will slow down, until the driver takes over both the steering wheel and gas pedal. But we did not hear any warning beep before the crash, and the car did not slow down either. It just veered right in a sudden and crashed into the barrier posts. Apparently the autopilot system malfunctioned and caused the crash. The car was running between 55 and 60 mph, and the barrier posts are just 3 or 4 feet away. It happened in less than 1/10 of a second from the drift to crash. A normal driver is impossible to avoid that in such a short time.

r2. I was horrified by the fact that the Tesla autopilot did not slow down the car at all after the intial crash. After we crashed on the first barrier post, autopilot continued to drive the car with the speed of 55 to 60 mph, and crashed another 11 posts. Even after I stopped the car, it was still trying to accelerate and spinning the engine in high speed. What if it is not barrier posts on the right side, but a crowd?

r3. Tesla never contacted me after the accident. Tesla just issued conclusion without thorough investigation, but blaming me for the crash. Tesla were trying to cover up the lack of dependability of the autopilot system, but blaming everything on my hands not on the steering wheel. Tesla were not interested in why the car veered right suddenly, nor why the car did not slow down during the crash. It is clear that Tesla is selling a beta product with bugs to consumers, and ask the consumers to be responsible for the liability of the bugging autopilot system. Tesla is using all Tesla drivers as lab rats. We are willing to talk to Tesla concerning the accident anytime, anywhere, in front of the public.

r4. CNN’s article later about the accident was quoting out of context of our interview. I did not say that I do not know either Tesla or me should be responsible for the accident. I might consider buying another Tesla only if they can iron out the instability problems of their system.

rAs a survivor of such a bad accident, a past fan of the Tesla technology, I now realized that life is the most precious fortune in this world. Any advance in technology should be based on the prerequisite of protecting life to the maximum extend. In front of life and death, any technology has no right to ignore life, any pursue and dream on technology should first show the respect to life. For the sake of the safety of all Tesla drivers and passengers, and all other people sharing the road, Mr. Musk should stand up as a man, face up the challenge to thoroughly investigate the cause of the accident, and take responsibility for the mistakes of Tesla product. We are willing to publicly talk to you face to face anytime to give you all the details of what happened. Mr. Musk, you should immediately stop trying to cover up the problems of the Tesla autopilot system and blame the consumers.

So what is actually going on here? Tesla says its logs show the car alerted the driver to take back control; Pang claims otherwise. At least, it would have been reasonable for the automaker to reach out to the driver following the crash before issuing a statement. Does Autopilot require further refinement, as Consumer Reports suggests?

We were sorry to hear about your accident, but we were very pleased to learn both you and your friend were ok when we spoke through your translator on the morning of the crash (July 9). On Monday immediately following the crash (July 11), we found a member of the Tesla team fluent in Mandarin and called to follow up. When we were able to make contact with your wife the following day, we expressed our concern and gathered more information regarding the incident. We have since made multiple attempts (one Wednesday, one Thursday, and one Friday) to reach you to discuss the incident, review detailed logs, and address any further concerns and have not received a call back.

As is our standard procedure with all incidents experienced in our vehicles, we have conducted a thorough investigation of the diagnostic log data transmitted by the vehicle. Given your stated preference to air your concerns in a public forum, we are happy to provide a brief analysis here and welcome a return call from you. From this data, we learned that after you engaged Autosteer, your hands were not detected on the steering wheel for over two minutes. This is contrary to the terms of use when first enabling the feature and the visual alert presented you every time Autosteer is activated. As road conditions became increasingly uncertain, the vehicle again alerted you to put your hands on the wheel. No steering torque was then detected until Autosteer was disabled with an abrupt steering action. Immediately following detection of the first impact, adaptive cruise control was also disabled, the vehicle began to slow, and you applied the brake pedal.

Following the crash, and once the vehicle had come to rest, the passenger door was opened but the driver door remained closed and the key remained in the vehicle. Since the vehicle had been left in Drive with Creep Mode enabled, the motor continued to rotate. The diagnostic data shows that the driver door was later opened from the outside and the vehicle was shifted to park. We understand that at night following a collision the rotating motors may have been disconcerting, even though they were only powered by minimal levels of creep torque. We always seek to learn from customer concerns, and we are looking into this behavior to see if it can be improved. We are also continually studying means of better encouraging drivers to adhere to the terms of use for our driver assistance features.

We are still seeking to speak with you. Please contact Tesla service so that we can answer any further questions you may have.