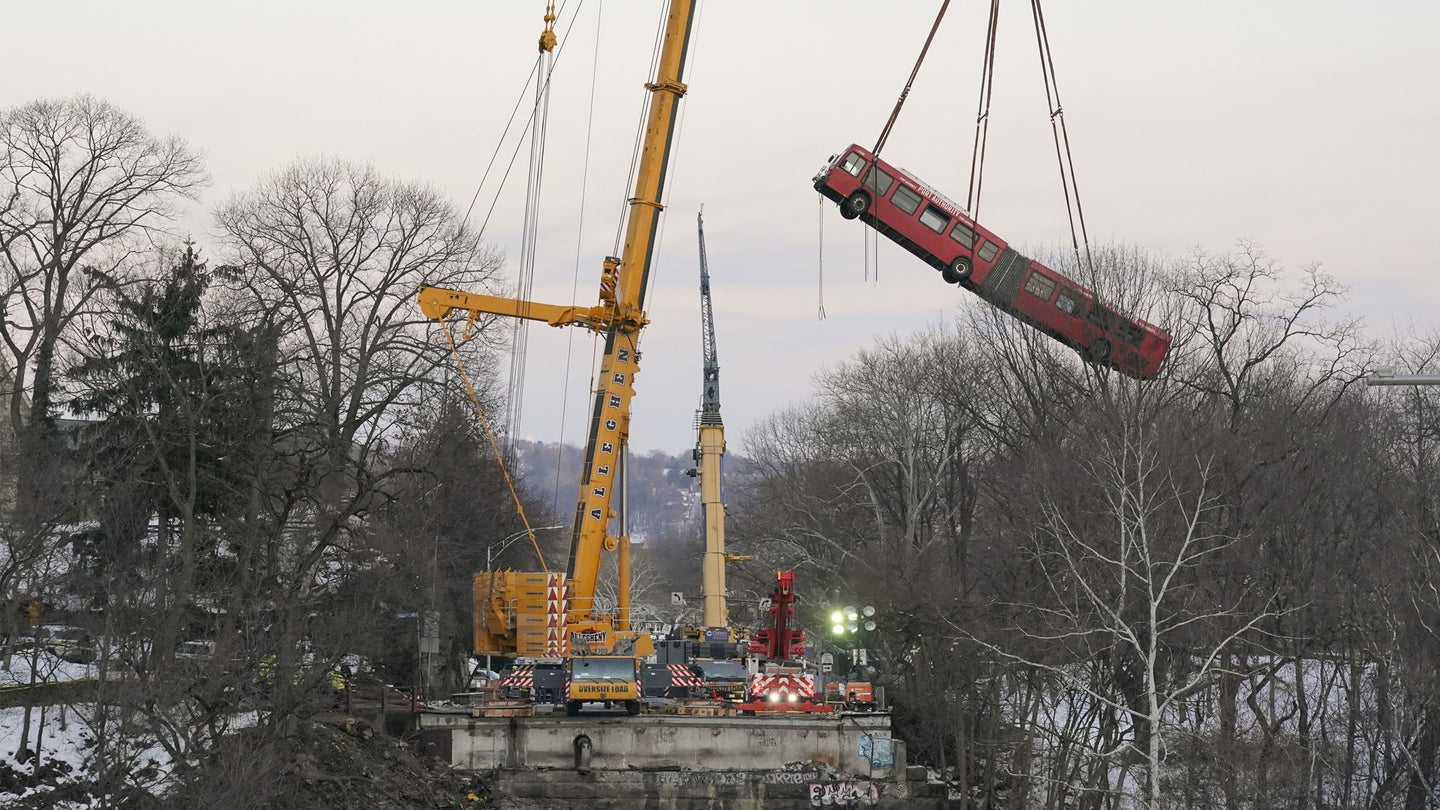 Last week, a sudden bridge collapse in Pittsburgh, Pennsylvania captured headlines, with the fall of the Fern Hollow Creek crossing thankfully only causing minor injuries as it came down. Now, the cleanup effort is in full swing, with the terrain and conditions presenting workers on the ground with significant challenges. In particular, it's been a huge effort to recover the bus that was traveling across as the bridge gave way.

The articulated bus run by the Port Authority of Allegheny County was carrying just two passengers as it crossed the bridge just after 6:30 a.m. on January 28. When the span collapsed, the bus was trapped in the ravine in Frick Park which the bridge was built to cross, along with five other cars according to AP News. Rescuers formed a human chain to help reach the occupants of the bus and bring them to safety, with others rappelling almost 150 feet into the ravine to reach those in other vehicles.

The cleanup has begun, with the first order of business being to recover the vehicles from the wreckage of the downed bridge. As you might imagine, craning up a hefty bus is hard enough on a good day. In this case, snowy conditions and the fact that the bus itself is sitting on an incline in a ravine only makes things harder. The bus in question is #3309 belonging to the Port Authority in Allegheny County, with the 2013 New Flyer Industries D60LFR weighing in excess of 40,000 lbs. You can actually get an idea of what it was like to ride on this exact bus on YouTube, with a video shot in 2018 on downtown Route 61C in Pittsburgh, PA.

As the recovery kicked into full swing on Monday, workers used ladders placed on the collapsed road surface to make their way down the side of the bus to position the lifting apparatus as required. A team from Pittsburgh Hazmat stepped in to drain the bus of 100 gallons of diesel prior to the lifting operation.

Some debris from the bridge itself was also sitting on the roof of the vehicle, only complicating the efforts to extricate it. Lifting the bus could send large chunks of debris tumbling to the ground which could easily injure those in the vicinity, so finesse and care was the order of the day.

A large crane from Allegheny Crane and Rigging was the main rig charged with lifting the bus clear of the wreckage, with a host of smaller cranes on hand to assist. With the crane and lifting rig specially configured for the job, the heavy articulated bus was wrested free of the rubble. Photos taken by the Pittsburgh Public Safety Department on the ground show that a small crowd had gathered to watch the recovery operation.

The 60-foot long bus was always going to be a difficult lift. The articulated section in the middle only makes things harder, and it's not hard to imagine a worst-case scenario in which the vehicle jackknifes in the air and splits in the middle. However, the professionals were on the job, and the bus was lofted high in the air before being brought safely to rest on the remaining roadway at the edge of the Frick Park ravine. The cranes also set about lifting out the handful of other cars that had fallen victim to the bridge's sudden collapse.

Back in 2016, The Drive published an article on how the US government keeps its many bridges from collapsing across the Union. Sadly, it seems that process has gone awry in this case. Despite reports in 2019 and more recently in September 2021 that the bridge was in "poor" condition, it was not deemed bad enough to close at the time. PennDOT is holding on to the full inspection report, declining calls for a public release at this stage as investigations are continuing.

Notably though, the bridge has shown obvious signs of degradation for some time, even to a lay audience. Notably, a local software engineer called attention to a failed cross-brace under the structure as far back as 2018.

Rectification works were carried out afterwards and additional bracing was in place, but it nonetheless shows that this bridge has long been neglected and its collapse should hardly come as a surprise.

It's not the only bridge suffering in America right now, either. 2021 saw a beam failure on the Hernando DeSoto bridge across the MIssissippi river, which serves as a vital link from Tennessee to Arkansas. The story is much the same, with damage first discovered years ago well before the major failure actually occurred.

While those on the bridge were able to escape serious injury, next time people may not be so lucky. Here's hoping this is the wake-up call that municipalities need to get their infrastructure into shape.