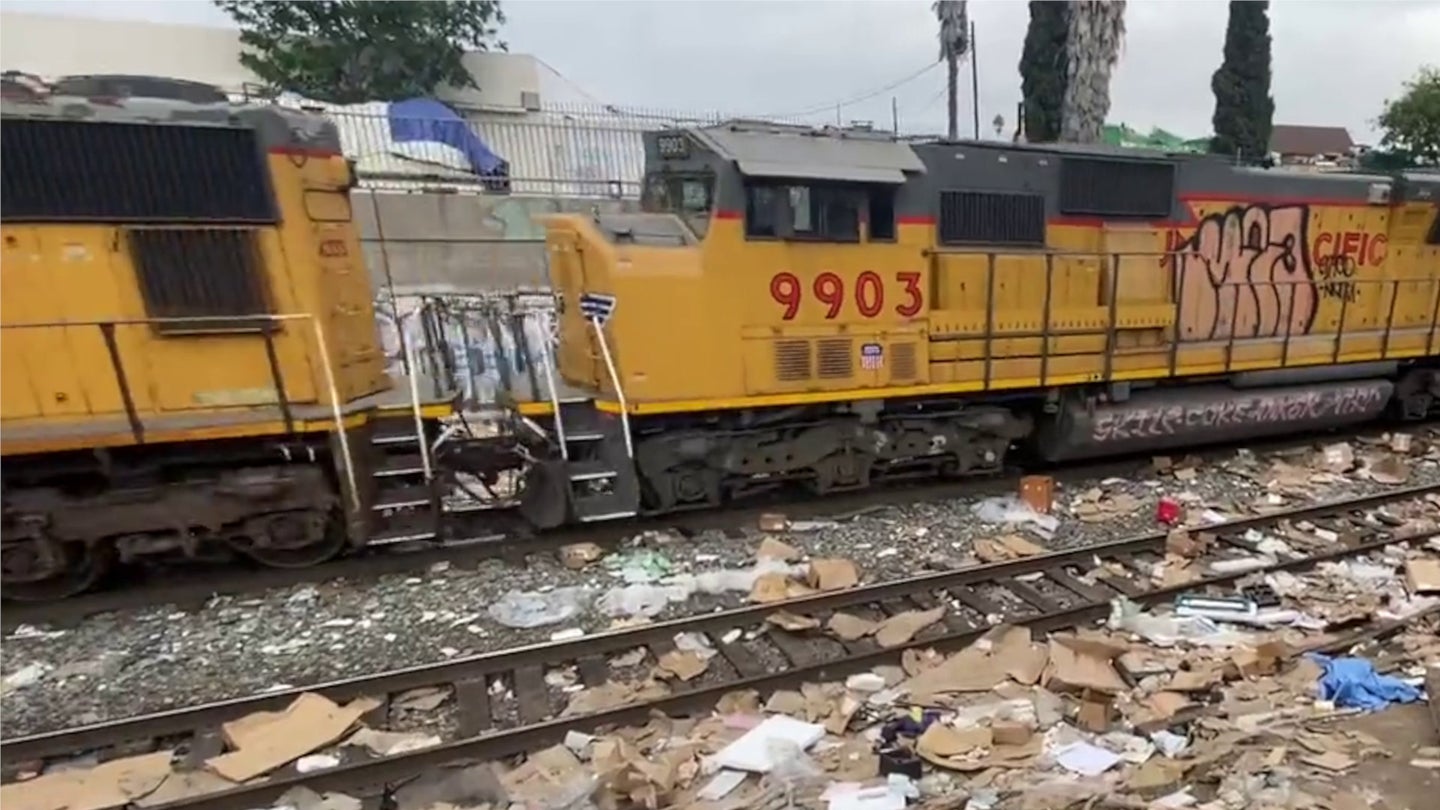 Typically when we think of train robberies, we cast our minds back to the days of the Wild West, when carriages were boarded from horseback and long revolvers were the weapon of the day. Train robberies still occur, as it turns out, but these days they're typically more mundane, as shown by reporter John Schreiber on Twitter this week.

Schreiber went down to Lincoln Heights in Los Angeles, amidst scanner reports of thefts down by the tracks. As it turns out, train robberies at the Union Pacific intermodal transport facility are no rare occurrence. With trains slowing as they move through the area, thieves take the opportunity to break into the containers onboard.

Schreiber estimates that every fourth or fifth train car had its container breached. The tracks and surrounding area are littered with detritus from thousands of packages torn open after being lifted from the trains. Apparently the area was cleaned just 30 days prior to Schreiber's arrival on the scene, indicating the huge mess is from just one month's worth of train heists.

The thieves don't discriminate, with all manner of parcels torn open in the search for valuable loot. Schreiber found everything from EpiPens, to unused COVID tests and fishing lures littering the ground. Obviously, anything of greater value ends up leaving with the thieves to be fenced or otherwise sold on for profit.

Upon scanning a tracking number on a discarded shipping box, Schreiber notes that the UPS website reports the parcel as "delayed." Thieves have a particular taste for UPS bags too, according to the word of local law enforcement, as they're often full of many smaller packages headed to residential addresses.

Security at the intermodal depot, and across the Union Pacific rail network, comes down to the purview of the Union Pacific Police. Recruits to the company's law enforcement arm come from applicants with at least one year's experience in public law enforcement or military police roles. Schreiber's crew spotted officers down by the tracks during their visit, chasing off some interlopers from the area. However, given the sheer volume of stolen packages discarded on the ground, it's clear that security at the facility is by no means watertight.

Package theft remains a big problem in the US, and often happens on the doorstep rather than in transit, sometimes with dramatic results. According to the NY Post, the twelve months up to November 2021 saw 210 million parcels stolen across the country, with 64.1% of Americans falling victim to such activity.

Until security improves, it seems apparent that the downtown LA area will remain a hotspot for package theft on the rails. If you've lost a parcel moving through the area recently, it might just have ended up discarded on the ground in this very facility.