Lexus is bringing a V8 to a six-cylinder fight. How does it stack up? 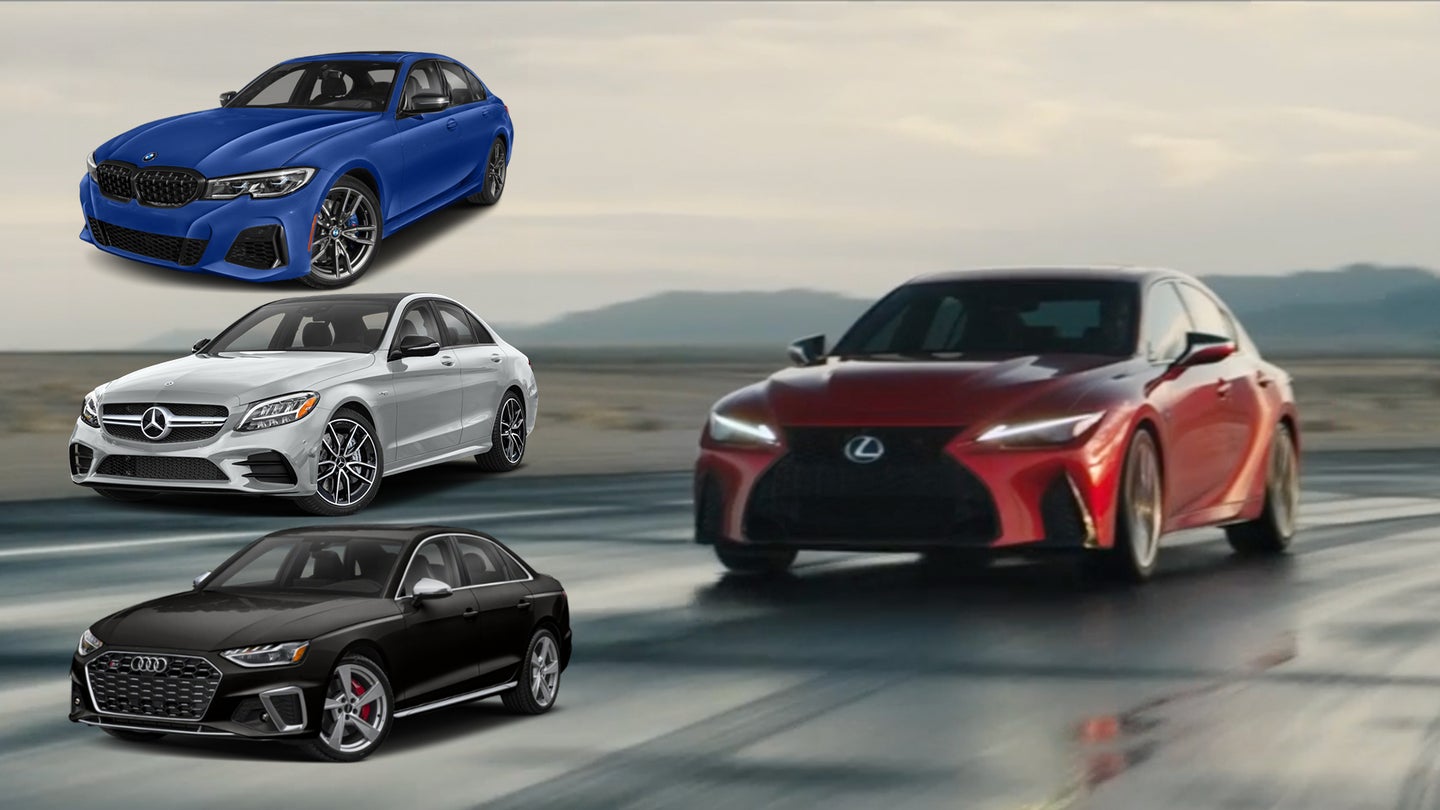 It's official, folks. Lexus is putting its 5.0-liter V8 back into the IS sports sedan. Now, it's time to see how the 2022 Lexus IS 500 F Sport Performance stacks up to the competition. You might be tempted to pair it up against elite stuff like the BMW M3, Mercedes-AMG C63, and the new Cadillac CT4-V Blackwing and you'd be correct if this were a full F. But this isn't a full IS F.

According to Lexus, its new F Sport Performance line was created to go toe-to-toe with other "mid-performance" luxury car ranges like BMW's M Performance and Audi's S-prefix cars. Hence, we'll be comparing it with the BMW M340i (rear-drive, just like the IS 500), Mercedes-AMG's C43, and the Audi S4. And before you go accusing Lexus of segment-based sandbagging, keep in mind that since Lexus had the "mid-performers" in mind when calibrating the IS 500's performance, it'll probably have those same cars in mind when setting the new V8 IS's price as well.

By the numbers, the trio of German sports sedans all look very similar. Like eerily similar. Three-liter turbocharged six-cylinder engine? Check. Power and torque in the mid-to-high 300s? Check. Curb weight somewhere between 3,800 and 3,900 pounds? Check. Zero-to-60-mph time in the mid-4s? Check. 155 mph top speed? Checkity-check. There are some differences, though. The BMW stands out for being available with pure rear-wheel drive (xDrive is an option) while the Audi's starting price is a decent chunk of change lower. The Merc boasts an extra turbo and an extra gear. Other than that, these three were clearly made with each other in their respective crosshairs.

That new Lexus, meanwhile, looks like it'll be capable of the same amount of pace but get there with two additional cylinders and no turbos. Its 5.0-liter V8 (the same one outta the LC 500 and RC F) puts out a mighty-sounding 472 hp and 395 lb-ft. here. Despite that and a curb weight that's only marginally higher than that of the others, however, the IS 500 hits 60 in 4.5 seconds, identical to the C43 and 0.1 seconds slower than the M340i and S4.

Given its much higher peak output figures, you'd be forgiven for thinking the Lexus should wipe the floor with the other three in a straight line but, evidently, it doesn't, at least not in a short race from a dig. But why not? It's probably because even though the IS has more peak hp and torque, those are naturally-aspirated horses and, uh, torques, meaning that peak comes in considerably later. The IS 500 hits peak hp at a sky-high 7,100 rpm while maximum torque only comes in at 4,800 rpm. Also, something tells us Lexus' launch programming isn't quite as aggressive as most others' in the class for the sake of preserving that legendary reputation for longevity.