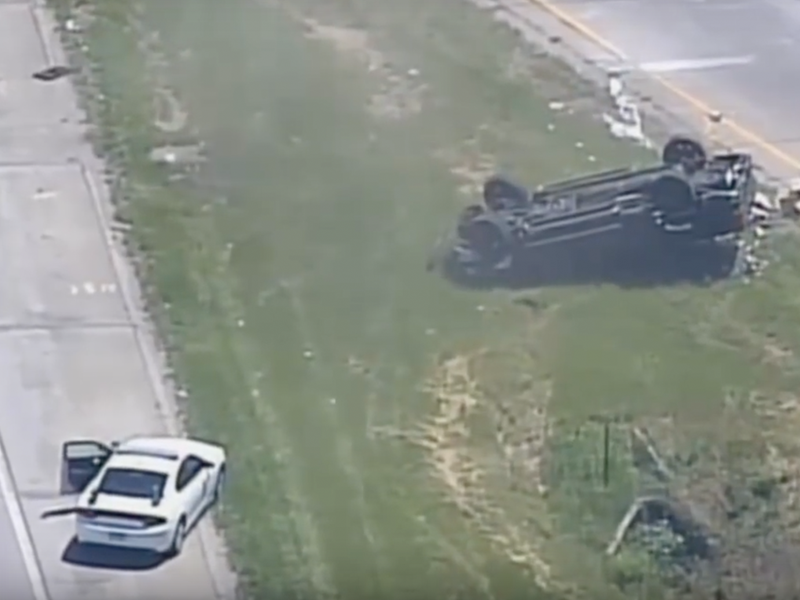 A police chase took a violent turn earlier this week in Kansas City, Missouri, when a police officer's attempt to halt a stolen truck instead sent it flipping ass-over-teakettle when it went off the road and down an embankment.

According to police, on June 8, 31-year-old Summer Jean Nigh stole the 2005 Dodge Ram from Independence, Missouri, but quickly found herself being pursued by the Independence P.D. in the air and the Kansas Highway Patrol on the ground. Nigh led police on a chase along surface streets before turning onto Interstate 35, at which point one of the state troopers initiated a pit maneuver in an attempt to stop her vehicle. However, when the Ram spun out, it dropped into a grassy area between the roadway and a on-ramp, causing it to overturn and crash.

Remarkably, Nigh suffered only minor injuries in the accident, even though she was not wearing a seat belt.

While the phrase "pit manuever" makes it sound like something from either racing or barbecue, it's actually an acronym, traditionally standing for "precision immobilization technique." During a pit maneuver, the pursuing vehicle's driver nudges the back corner of the fleeing vehicle with the front corner of his or her own car; as most vehicles have more weight in the front than the rear, this moves causes the back end of the prey car to break loose, inducing a spin that often brings the vehicle to a halt. (We'd be curious to see what would happen if one Porsche 911 tried to pit another.)

Get everything right, and the getaway car comes to a safe, reasonably controlled stop. But if, say, the impacted vehicle flies off the road and down a hill...well, you don't need to guess what happens, because you can watch the video below.