The $6.5M Pagani Huayra Tricolore Is So Much More Than a Flag-Themed Tribute 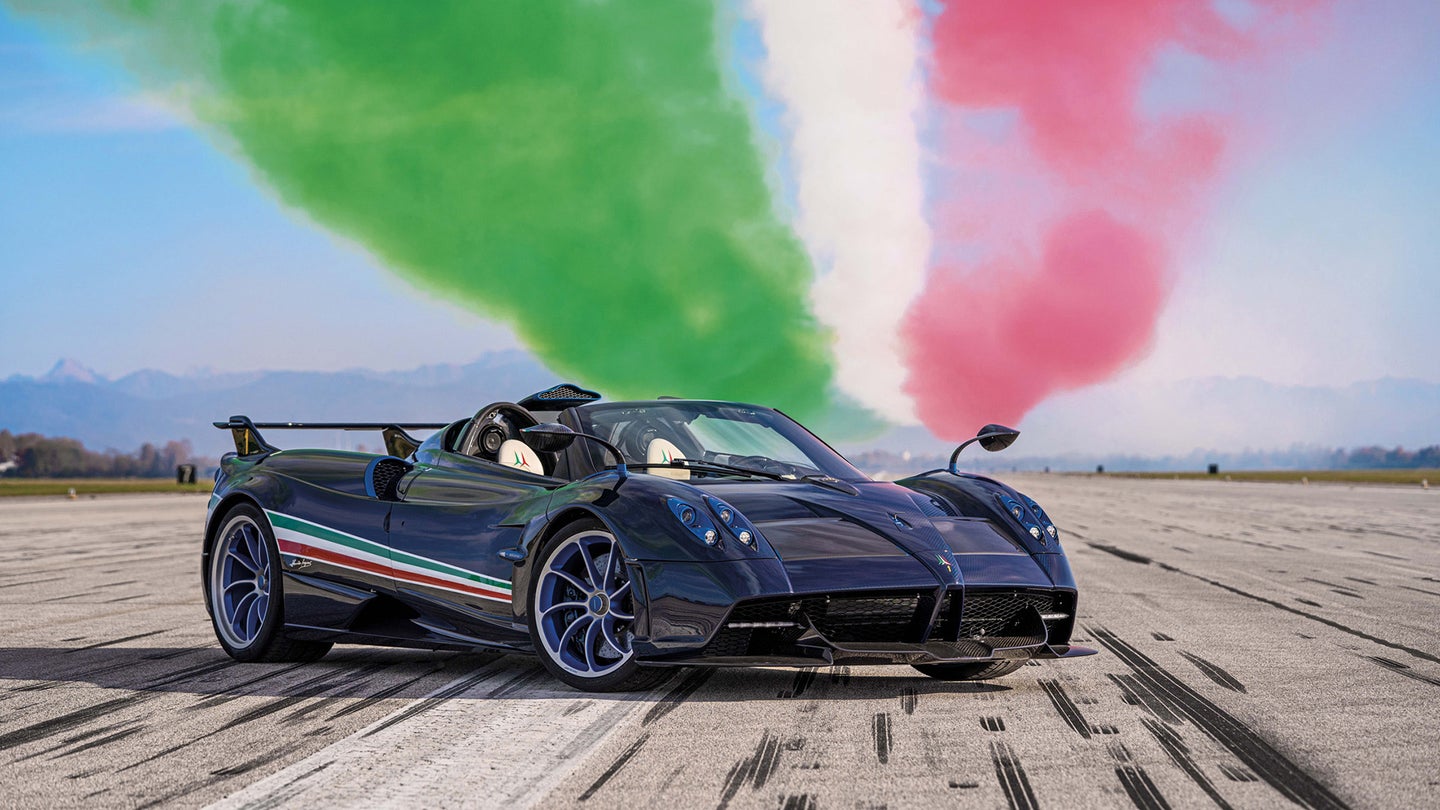 Pagani launched its twin-turbo Huayra back in 2012. Perhaps not surprisingly, 200 coupés and roadsters, 20 BC coupés, 40 BC roadsters and several one-offs later, it's time for a trio of Tricolore models, priced at $6.52 million a pop. These specials come a decade after the three Zonda Tricolore editions were presented to celebrate 50 years of the Frecce Tricolori, the world’s largest aerobatics patrol painting the tricolor of the Italian flag across the skies. The new Huayra Tricolore roadsters produced for the 60th anniversary pack 840-horsepower V12s, all the extras and even more custom features to once again salute the crews of those blue Aermacchi MB-339A P.A.N aircrafts.

Officially known as the 313th Acrobatic Training Group, National Aerobatic Team (PAN) Frecce Tricolori, the Italian aerobatics patrol's roots go all the way back to the 1920s. Today, they fly 10 Aermacchi MB-339A training jets, nine flying in formation, and one solo. The PAN variants built for the team got their tip tanks removed, only to gain a smoke generator.

The Tricolore-spec Huayras are built around Pagani's newest monocoque, which is made from materials such as Carbo-Titanium HP62 G2 and Carbo-Triax HP62. Using all theknow-how gained through the Pagani Imola program, the Tricolores also come with an altered suspension geometry further reducing dive and roll effects during braking and cornering, aided by electronically controlled active shock absorbers and the Huayra's active aero package.

Mercedes-AMG's 6.0-liter twin-turbo V12 produces 840 horsepower at 5,900 rpm, along with 811 foot-pounds of torque from 2,000 to 5,600 rpm. All this power launches the rear-drive car weighing 2,799 pounds dry. The lightness is partly thanks to the new transmission package, which includes a seven-speed Xtrac AMT sequential gearbox with an electromechanical differential, as well as a flywheel-clutch unit consisting of an ultra-light tri-disc clutch with a tripoid coupling system. Pagani says the entire transmission system is 35 percent lighter than a dual-clutch gearbox, while the transverse structure not only provides weight savings but also helps to reduce the effect of polar inertia, limiting a mid-engine car's typical tendency to oversteer.

The Huayra Tricolore won't take off either. The Frecce Tricolori, however...

When it comes to the all-important details, the Huayra Tricolore's rear wing supports recall the tail fin of the jets, yet Horacio Pagani wouldn't stop there. In the center of the front hood, there is also a Pitot tube, the instrument that allows aircraft to measure the macroscopic air speed and, therefore, determine the aerodynamic condition of the plane. Now, these Huayras can inform their drivers of Mach numbers and knots just as efficiently through a dedicated gauge.

As often is the case with Paganis, the real party begins once you hop in. All aluminum components are made from aerospace-grade alloys and machined from billet before getting the blue anodized treatment. The gear knob, carved from a single block of aluminum and carbon, is then milled through a five-axis numerical control center and finally hand-polished with a special transparent coat. Even the floor mats are made of composite materials, while the seats feature the same two-tone theme as the Zonda Tricolore from 10 years ago.

There's plenty of white, red and green stripes, and the Frecce Tricolori emblem is chiseled on the four-point seat belt fastener as well as embroidered on the headrests. Oh, and don't forget the anemometer. That's what's inside a Huayra Tricolore, on top of a pedal you'd really want to floor.

Company founder and long-time Frecce Tricolori fan Horacio Pagani had this to add while we wait for the Huayra R, the latest of his track-happy creations featuring a naturally-aspirated AMG V12, set to debut in January:

"In a year, 2020, which has put our country to the test like never before, we are proud to be able to celebrate a symbol of unity and national pride such as the Frecce Tricolori, a milestone that has emerged from an era of values and passion, and a long period of time in which men and machines were able and had to surpass themselves, day after day. For all of us, the Frecce represent an example of determination, a demonstration of what the strong desire to move forward and overcome obstacles can achieve. We hope that Huayra Tricolore will be a worthy tribute."

We shall take it, Mr. Pagani. We shall.

Got a tip on rare Paganis, tinting carbon fiber, or AMG's new naturally-aspirated V12? Send us a note: tips@thedrive.com