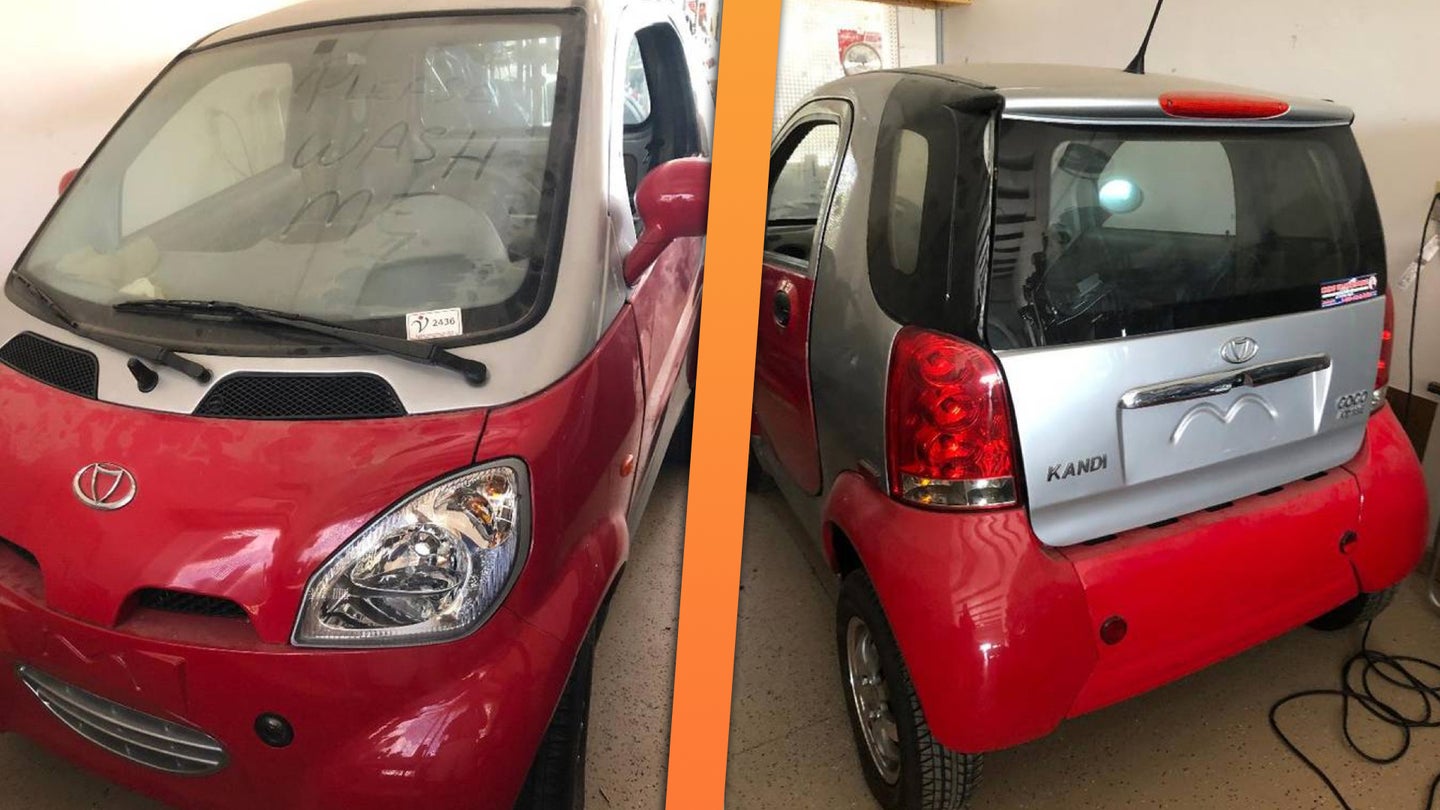 The Chinese-made Kandi Coco is an absurdly cheap, small electric vehicle meant for simple, low-speed neighborhood transportation. Its design feels like a weird knock-off of the Smart ForTwo, and this updated 2012 model spotted on Craigslist has a top speed of just 35 miles per hour.

If the Kandi Coco looks familiar, that may be because it was easily the strangest car in Tiger King. Joe Exotic had one as a runabout and frankly, why wouldn't he? It was the absolute cheapest EV you could buy in Oklahoma, where his zoo was located. Federal rebates and state tax credits used to drop the Coco's price to as little as $865 for Oklahoma residents, according to Automobile.

This isn't an Oklahoman Coco, however, and the seller listed it with a non-Oklahoma premium, asking $1,200 even though it doesn't run. According to the seller, it needs batteries and possible some other work. It could use some other love, too, as one photo shoes that someone wrote "Please Wash Me" in the dust on the front windshield.

This Coco is located in Florida, and crucially, the seller lists it as having a "clear Florida title." Florida notably has no vehicle inspections and a tendency to let weird stuff be completely legal on the roads. Florida is the magical land that essentially gives you a free pass to create some kind of oddball frankencar, provided you register it there. How hard would it be to register Stuffing Type 4s Into Things, LLC, down that-a-way? Asking for a friend.

The seller notes that the nearest Kandi dealership is in The Villages, Florida, which checks out given that the sprawling retirement community is the unofficial golf cart capitol of the world. Forget being the Tiger King—that sounds like a bad time. Buy a Coco and become the one true Golf Cart King, with the ability to smoke all of your neighbors' carts with its 35 mph of FURY.

Taking it back to the dealership and leaving it stock just seems wrong, though. Such a weird, lightweight pod of a vehicle really deserves a ludicrous engine swap of some kind. A rotary? A Viper V10 thrown onto an elongated frame that sticks out the front of the car? It's already rear-wheel-drive, so it's basically a sports car! Sort of! Either way, the world of bad ideas is yours for the pillaging, friends.

Honestly, it already looks a lot like a ForTwo, and the ForTwo came as an electric vehicle anyway. Why not just try to make an electric ForTwo drivetrain fit? That would give you a big boost in power and the weirdest sleeper ever for the handful of cart-driving retirees and Joe Exotic stans who recognize it.

Kandi is coming out with a new car that promises to be the cheapest EV in America once again, but why wait? You can already have a Kandi. What would you do to make this Coco faster?

Go loco with a Coco on Craigslist here.