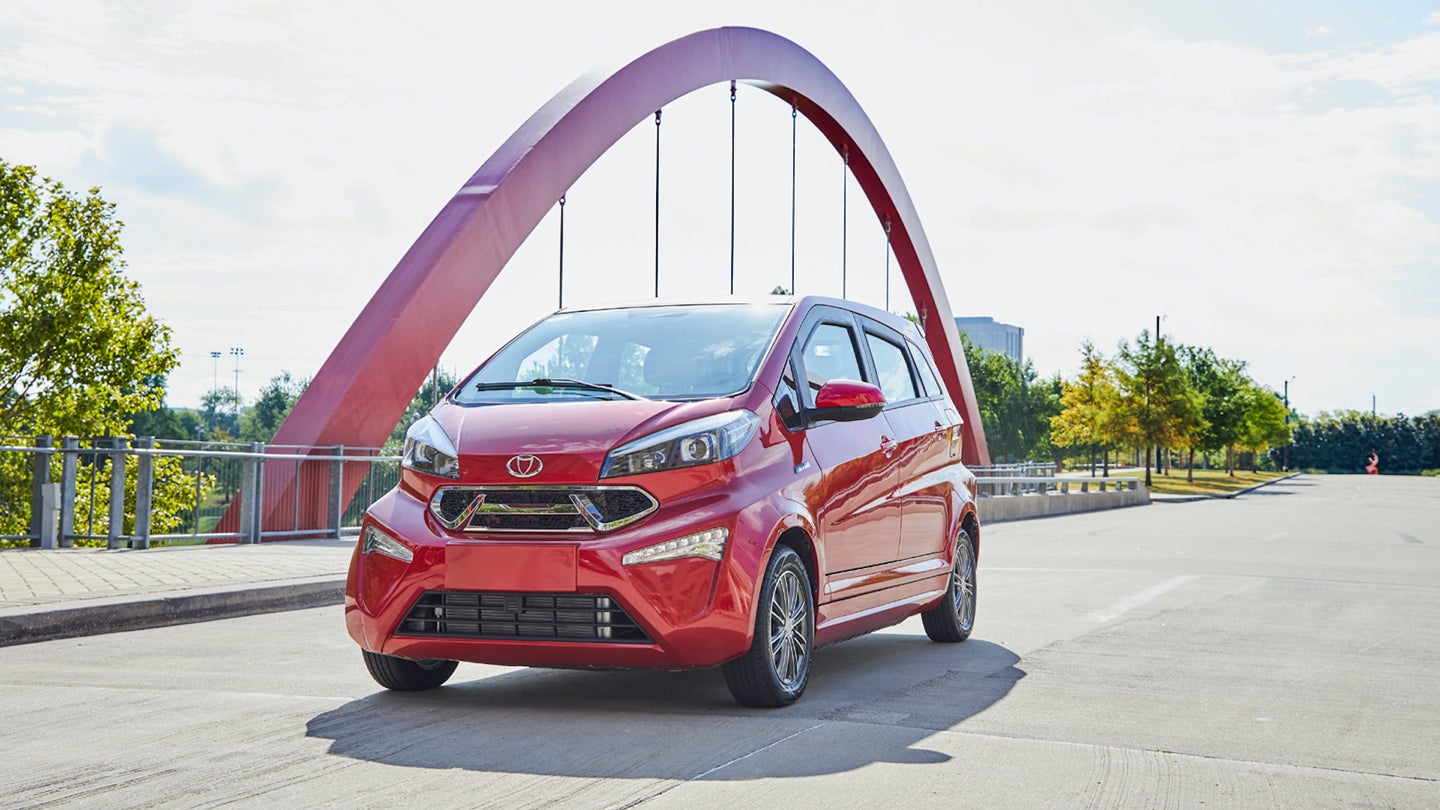 Car companies and regulators want electric vehicles to be the next big step for personal transportation. But until battery costs go down and a better charging network exists, that road is fraught with troubles. That, of course, hasn't stopped multibillion-dollar corporations from trying to democratize the EV. Now, a small EV startup called Kandi claims to have figured out how to bring "sleek and advanced" EVs to everyone, regardless of their financial status."

Kandi America, in brief, is a subsidiary of Kandi Technologies Group; a Chinese battery and EV manufacturer. So far, Kandi's primary customers have been other big Chinese car or tech companies like Geely, owners of Lotus and Volvo, and Didi, a transportation giant. With its new K23 and K27 EVs, however, Kandi hopes to court the American consumer market, and on price point alone, both stand to tempt their share of car buyers.

The K27, a vaguely Fiat 500-looking hatchback is the cheaper of the two, with a 17.7-kWh battery, an advertised range of up to 100 miles, and a top speed of 63 mph, making it just capable of highway speed. Seven hours on a 240-volt feed is said to be enough to fully charge it, meaning it'll always be ready for a drive if left hooked up overnight. The cost? As low as $12,999 after accounting for federal tax credits, though those with the budget to net all of the said tax credit may find Kandi's pricier option, the K23, more appealing.

Sized more like a Honda Fit (RIP), the K23 is a subcompact EV with a significantly larger battery, at 41.4 kWh. Accordingly, its 28-horsepower electric motor can pull it to 70 mph, and as far from home as 188 miles, or 38 further than a base Nissan Leaf can go, and at a lower price to boot. Federal tax incentives included, the Nissan starts at $24,100, and the Kandi, at $22,499.

When they reach the American market later this year, the K23 and K27 will be two of the cheapest electric cars on sale here and will be accordingly trimmed. Onboard gadgetry will be barebones, consisting of Bluetooth audio, a back-up camera, dual front airbags, and antilock brakes. Both are highway-legal, and will come with promising battery warranties of eight years or 62,000 miles—handy if battery degradation sets in within the 300- to 500-cycle window commonly seen with EVs.

It's worth remembering that even Tesla, which has long said it wants to democratize EVs, still has a $40,000 car as its cheapest model. But by skimping on an EV and committing to a Kandi, buyers will give up a lot of what we take for granted on even other EVs. Kandi tells us that while DC fast-charge compatibility is planned for next year, early birds will have to make do with just "level 2" 240-volt AC charging.

And while Kandi has submitted both models to the EPA to have their ranges verified, and the NHTSA for crash testing, no results for either Kandi can be found on the EPA's or NHTSA's public databases. Until these agencies issue their verdicts on Kandi's cars, buyers have to take the automaker at its word that the range capabilities are real, and that its cars won't flatten in a crash.

If you're willing to take a chance on these ultra-affordable Chinese-made EVs, Kandi America says it'll begin taking refundable $100 deposits on August 18, when sales commence in the company's hometown of Dallas-Fort Worth, Texas. With time, Kandi hopes to sell EVs in all 48 mainland states, though that might require a smooth launch down in Texas. And as times to launch a car company ago, the middle of an economic dip isn't an easy one.

Think they're onto something here?

It boasts features like Infinity Roof, Crab Mode, and Adrenaline mode—whatever those mean.