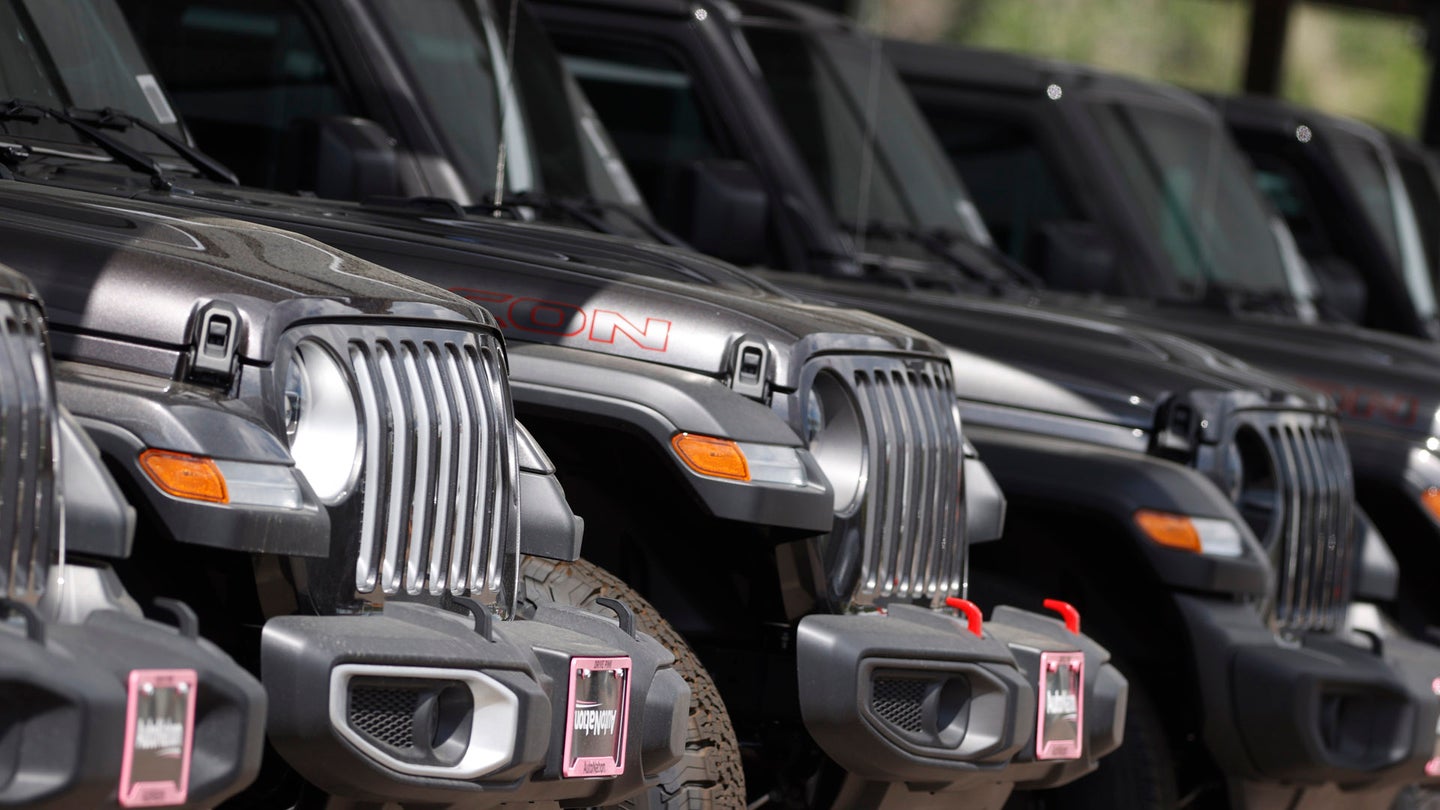 Good morning and welcome back to Speed Lines, The Drive's daily roundup of what matters in the world of cars and transportation. On tap for today: more bad news for car sales in June and Q2, what electrification means for jobs and Uber's "no mask, no ride" policy.

A programming note: Speed Lines will not appear tomorrow as we are off for the July 4 long weekend. And I myself have better things to do than write it. You'll just have to get along without me, somehow.

With rampant unemployment and Americans staying inside, we all knew that new car sales—one of the most solid indicators of economic health—would be way down in the second quarter of 2020, regardless of how many dealers learned to finally sell online. So how bad was it in Q2? Pretty bad. Maybe not quite as bad as some analysts predicted, but bad.

A chart from Automotive News with all currently available data shows double-digit sales declines pretty much across the board: year over year, Nissan was down 50 percent, Fiat Chrysler and BMW were down 39 percent, General Motors as a whole was down 34 percent and Toyota was down 35 percent. Data from Ford, Mercedes-Benz and a few others wasn't yet available. (Two of the rare bright spots were Mazda, down "only" 9 percent year over year, and Tesla, which at 90,650 deliveries was just about 5,000 cars off Q2 2019.)

As The Wall Street Journal reports, sales being down by about a third across the industry wasn't quite as bad as some had predicted. Sales were buoyed by incentives, deals and the stimulus package. But all those deals are drying up and lawmakers are weeks away from deciding on another stimulus. That's where things get tricky moving into summer:

But now many dealerships are running low on inventory as auto makers ramp up output after several weeks of factory downtime. Deals are drying up as car companies spend less on cash-back offers and pull back on attractive seven-year financing deals that brought customers to dealer lots during the pandemic.

Since hitting record highs in early May, company-sponsored discounts have fallen nearly 13%, according to J.D. Power. Promotional loans stretching out seven years accounted for a smaller portion of the market in June, representing 9.4% of transactions last month, compared with 12% in May.

Ward’s Intelligence estimates U.S. car dealers in June had 32% fewer vehicles on their lots compared with a year earlier. Pickup-truck supply was down 50%, as demand for trucks outpaced the rest of the market.

“The marketplace is growing less inviting,” said Jessica Caldwell, an analyst for car-shopping website Edmunds.com. “Current sales paint an optimistic picture given the circumstances, but between Covid-19 and today’s politically charged climate, the industry needs to prepare for uncertainties ahead.”

"The market is losing the upward momentum that it enjoyed in May and early June. The challenge ahead begins with the increasing number of COVID-19 cases that’s causing consumer sentiment to decline again. It also appears the pent up demand that gave us a much stronger recovery in May and June is waning. Dealer inventory remains challenged as well. When you add it up, it looks like the industry will be heading into an even more challenging sales environment in July."

That's where things get cloudy. The OEMs can't keep up the crazy deals forever, and inventory already isn't great in many areas thanks to factory shutdowns. I suppose the best thing automakers can hope for in July and beyond is consistent production and more stimulus cash in Americans' pockets.

'The Green Jobs Revolution' May Not Apply To Cars

Though the pandemic has thrown a sizable wrench into things, for automakers globally, it's the beginning of the end for the era of internal combustion. Spurred on by tightening regulations, every car company is figuring out how to pivot to electric vehicles. But as we've discussed here on Speed Lines before, EVs generally need fewer parts and thus fewer workers to make them. The electric auto industry may not be as sizable an employer as the current one is.

That means fewer opportunities to move into middle-class living, as car production jobs have traditionally been, as Bloomberg reports in this story about the closure of a Spanish Nissan plant amid that company's wider shift to EVs:

About 25,000 workers in the Spanish industrial hub have their livelihoods on the line. It’s a scene that could play out in car towns around the world as the coronavirus crisis accelerates a structural shift in the overcrowded, fast-changing auto industry.

Nissan’s decision to shut down its three plants in the scrubby hills outside Barcelona is part of a broader reorganization with alliance partners Renault SA and Mitsubishi Motors Corp., which involves cutting global production by 20%. The move is linked to the broader strains facing the sector as the era of the combustion engine gradually draws to a close.

“The transformation of the auto industry is unstoppable, it’s a new industrial revolution, and the only alternative is to adapt or die,” said Tomas Diaz, a Nissan worker and an official with the Comissions Obreres union in the Catalonia region. “Today is Nissan, but tomorrow it can be any other plant.”

Battery costs have gone down 87 percent over the past decade and ones with cost parity with traditional cars are just on the horizon. But as the auto industry pivots to becoming a much greener one, a lot of jobs will likely be left behind. That story's worth a read in full—expect to be hearing a lot more about this trend in the years to come.

July 4 weekend is upon us here in America, and on a normal year that would likely entail a lot of going out, drinking and partying. It still probably will! You should probably stop going to bars right now, for obvious reasons. But if you do end up drinking, calling an Uber is better than driving, as ever.

When you do, you'll have to wear a mask, as will your driver. USA Today reports the ride-hail giant is extending its "No Mask, No Ride" policy "indefinitely throughout the U.S. and Canada." Previously, that rule was in place just through the end of June. Now it's going to be the way forward for a while.

And Uber is going to Tech Company this mask requirement, because of course it is:

Uber also conducted a survey of 600 random Uber and Lyft drivers, finding that Uber drivers feel safer with COVID-19 related safety guidelines in place, the company said. The company added selfie technology for drivers in May that detects whether a driver is wearing a mask before they start a shift.

It also sends notifications to riders reminding them to wear a face covering before their driver arrives.

At any rate, Uber's not messing around with coronavirus and neither should you.

Tesla Stock Closed at a Record High After a Leaked Email. It Could Join the S&P 500 Soon. (Barron's)

Could Teleporting Ever Work? (Gizmodo)

The virus didn’t stop a Washington socialite from throwing a backyard soiree. Then the tests came back positive. (Washington Post)

What Went Wrong at the Los Angeles Times (Vice)