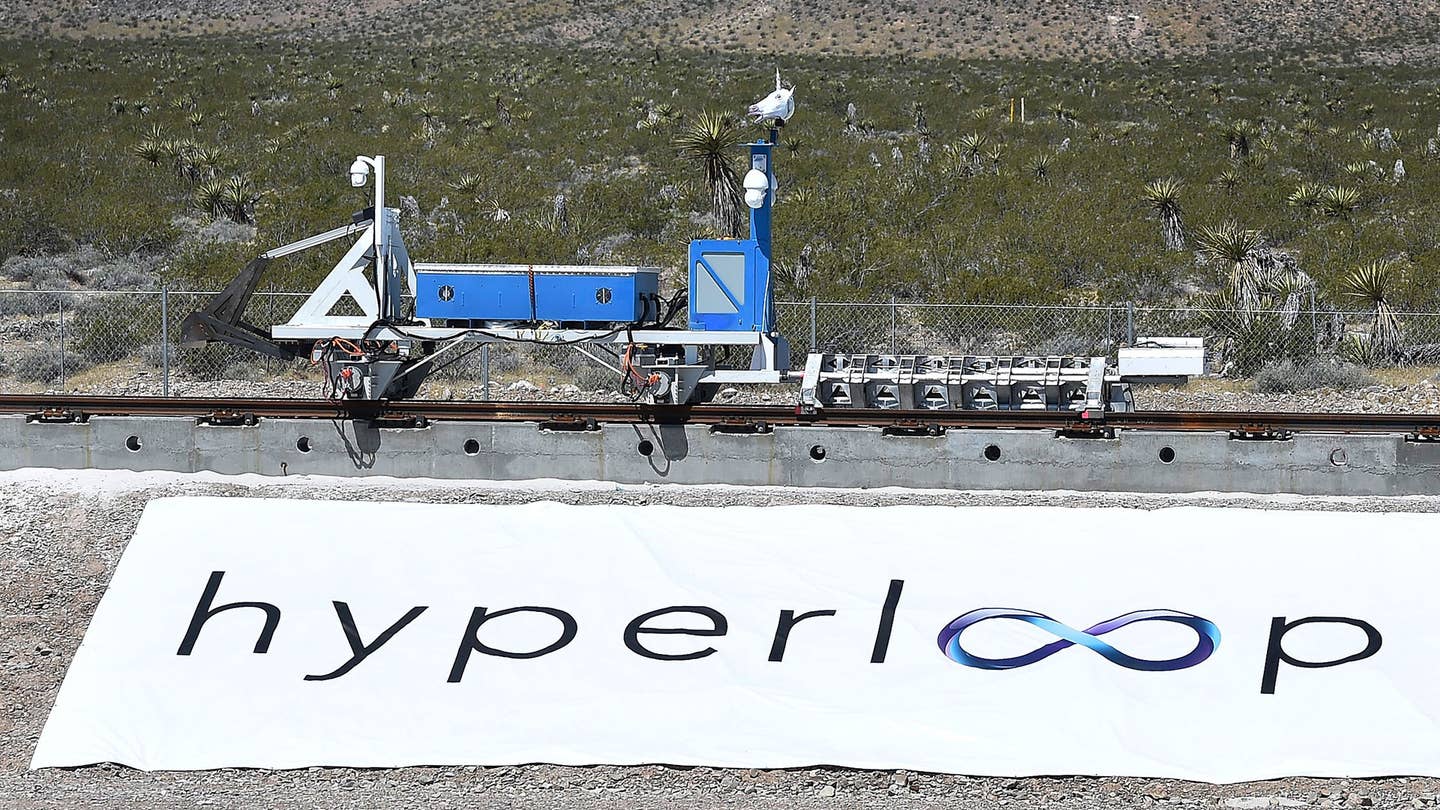 Compared with Tesla's electric cars and SpaceX's rocket ships, Elon Musk's Hyperloop is one exceedingly pie-in-the-sky piece of transportation. While the vehicles made by Tesla and SpaceX depend largely on proven technologies, the system of floating, vacuum-sealed maglev pods operates in comparatively uncharted waters. But the futuristic mode of transportation took one step closer to feasibility yesterday, when Hyperloop One fired off the first large-scale test of their system.

Well, not quite the entire system. The Los Angeles-based company was only testing the electromagnetic propulsion system that will be used to propel the passenger pods at speeds of up to several hundred miles per hour. There was no toilet paper roll-shaped passenger car, no massive tube designed to contain the car in a wispy blanket of super-low-pressure air—just a squat metal rail car mounted to a long, straight stretch of magnetically-charged track in a desert outside Las Vegas.

But while it might not have been as dramatic as a hot run on the Air Force's maglev test track, the propulsion system worked like a charm. The track-mounted linear induction motors, which roughly resemble a conventional electric motor that's been sliced open and unrolled, launched the cart down the tracks with a force of roughly 2.5 g, sending it from 0 to 100 mph in 1.1 seconds before cruising to a stop. (The manned version will accelerate more slowly, to keep from crushing innocent riders.)

In a production version of the Hyperloop, the reduced drag within the low-pressure tube should mean those motors would only need to be mounted on roughly 5- to 10 percent of the track, according to a Mashable interview with the company's senior vice president of engineering, Josh Geigel. Even so, that should be enough to scoot the final version along at speeds of around 700 miles per hour.

Amazingly-named Hyperloop One co-founder and CFO Brogan BamBrogan told USA Today that the company hopes to run a full test of the system at the same Nevada facility by the end of the year.

“This is where Hyperloop is getting invented,” he said. "This is about validating the hardware and software...We’re aiming to hit 400 mph in two seconds."

CEO Rob Lloyd added that he hopes to have the super-speedy mode of transportation ready for public consumption within five years. "We think we can move cargo by 2019 and passengers by 2021, if we can replicate the kind of support we've gotten here from the county and city of North Las Vegas," he said, according to USA Today.

Hyperloop One recently changed its name from Hyperloop Technologies, in order to avoid confusion with competing Hyperloop development firm Hyperloop Transportation Technologies. We bring this to your attention not just to avoid future confusion, but also because we really like typing "Hyperloop." Hyperloop!