"The car is a symbol of a journey, of adventure, of freedom, and those are such American concepts.” 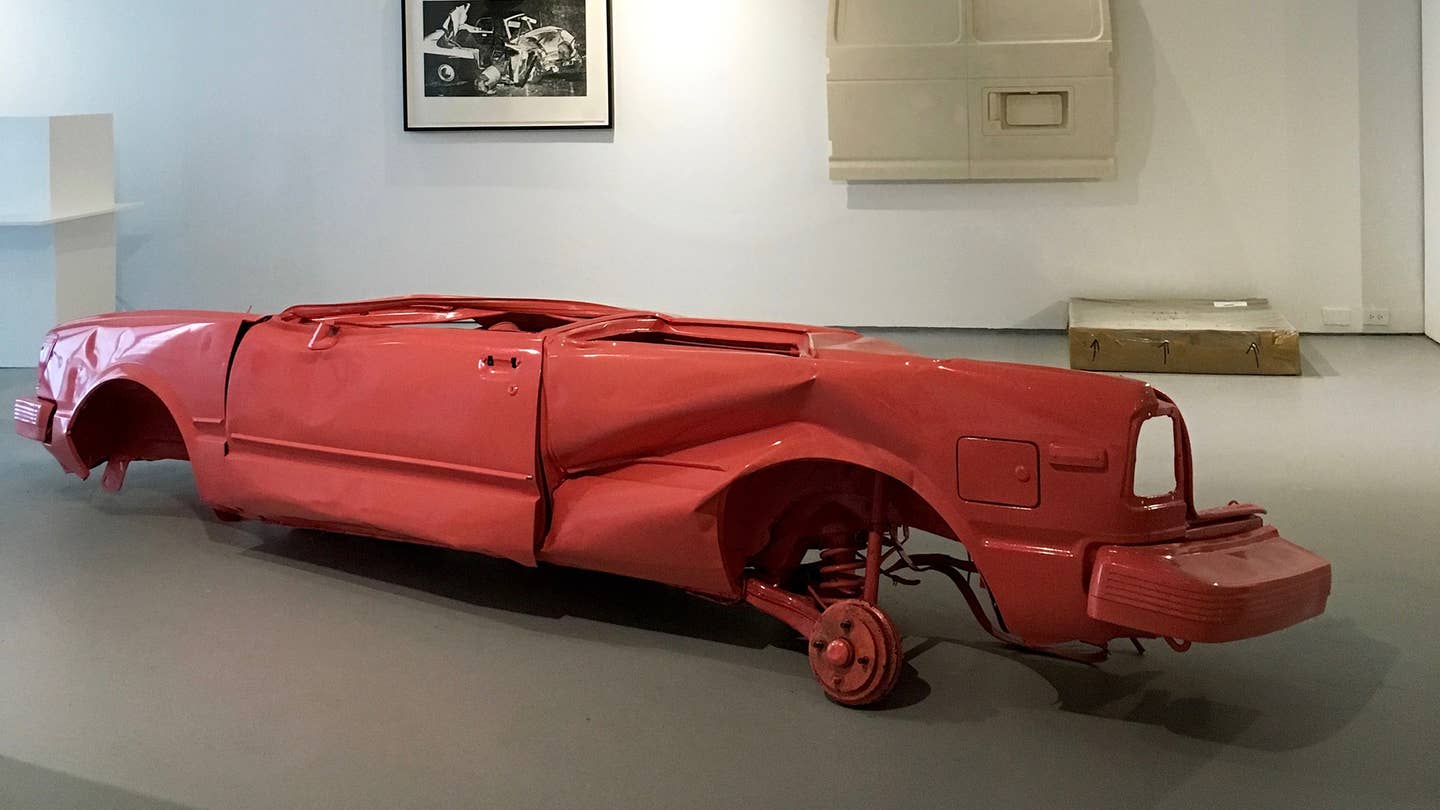 America is too big, its spirit too irrepressible, to be constrained by portraits, landscapes, or even abstraction. So for many American artists, the automobile is more than inspiration. It is a talisman; not just a part of the art, but the subject and the medium.

A new exhibition at the Leila Heller gallery in Manhattan’s West Chelsea gallery district pays homage to the delightful synergy between the motor vehicle and American art, from the Minimalist to the Post-Modern eras.

“Vivian only likes to do very manly shows,” jokes Alexander Heller as he and his co-curator, Vivian Brodie, walk me around the gallery prior to tonight’s opening.

“I curated a cowboy show before this one,” Brodie explains. “And while I was doing that, this idea gestated and intersected. The cowboy is, like the car, a symbol of a journey, of adventure, of freedom, and those are such American concepts.”

“When you’re driving in a car, you have that feeling of escaping. That you’re moving faster than you’re supposed to move. That you’re moving through things,” Heller says. “And for me, that’s just like art, like looking at a powerful work of art. The whole world shifts and moves around you, but you’re in one place.” (Heller admits that neither he nor Brodie has a valid driver’s license.)

Not surprisingly given the automobile’s prominence in California’s car-centric culture—and California’s influence in many of the influential artistic movements in the era being covered—west coast artists predominate. But New York is well represented too.

“On the west coast, the connection to the car is dictated by the landscape, and by the fact that you need a car,” Brodie says. The output from artists from the region are therefore often more visceral, and literal. “East coast artists often refer to the car more obliquely,” she says, pointing to a giant, silkscreen cutout of a Little Trees air freshener from Nate Lowman.

A perfect exemplar of this idea are William Eggleston’s lurid color photographs from the mid-Seventies, featuring subjects seducing with—and seduced by—their proximity to the cars upon which they lean. Similarly transfixing, but in a more grotesque Ballardian sense, is Andy Warhol’s Car Crash, though the attraction is fleeting and guilty like everything Warhol did (which is his particular genius and limitation.)

fall into Dana Powell’s dreamy yet lonely oil paintings of a mist-shrouded truck and a mist-shrouded road. But maybe I’ve just been reading too much Zach Bowman? I’m crushed by the technical literalism—or is it fundamental cynicism?—of Richard Estes’ and Robert Bechtle’s photorealistic automotive portraits in their worshipful—or are they disdainful?—appropriation not only the banality of the snapshot, but of all of life’s beautiful mundanity. And I’m drawn, conceptually at least, to Robert Rauchenberg’s dirt and resin tire tracks, looking as they do like the fossilized trace left behind when someone drove a shitty car through shit, a perfect monument to the American vehicles of my Malaise-Era Detroit youth.

But for me, the star of the show is Richard Diebenkorn’s Untitled. Painted in the mid-1950s, on loan from the Diebenkorn Foundation and never before displayed to the public, it exists on the cusp of the artist’s transition from abstract expressionist to more representational work. Though it predates Diebenkorn’s mesmerizing landscapes and the later, more ascetic Ocean Park series, it shares many of their key elements in terms of palette and composition. But it differentiates itself by the fact that, central to the piece, is a portrait of a Ford Fairlane. Stretching across the width of the painting like another of the artist’s famous horizon lines, the coupe is not separate from the surrounding vista, but integral to it.