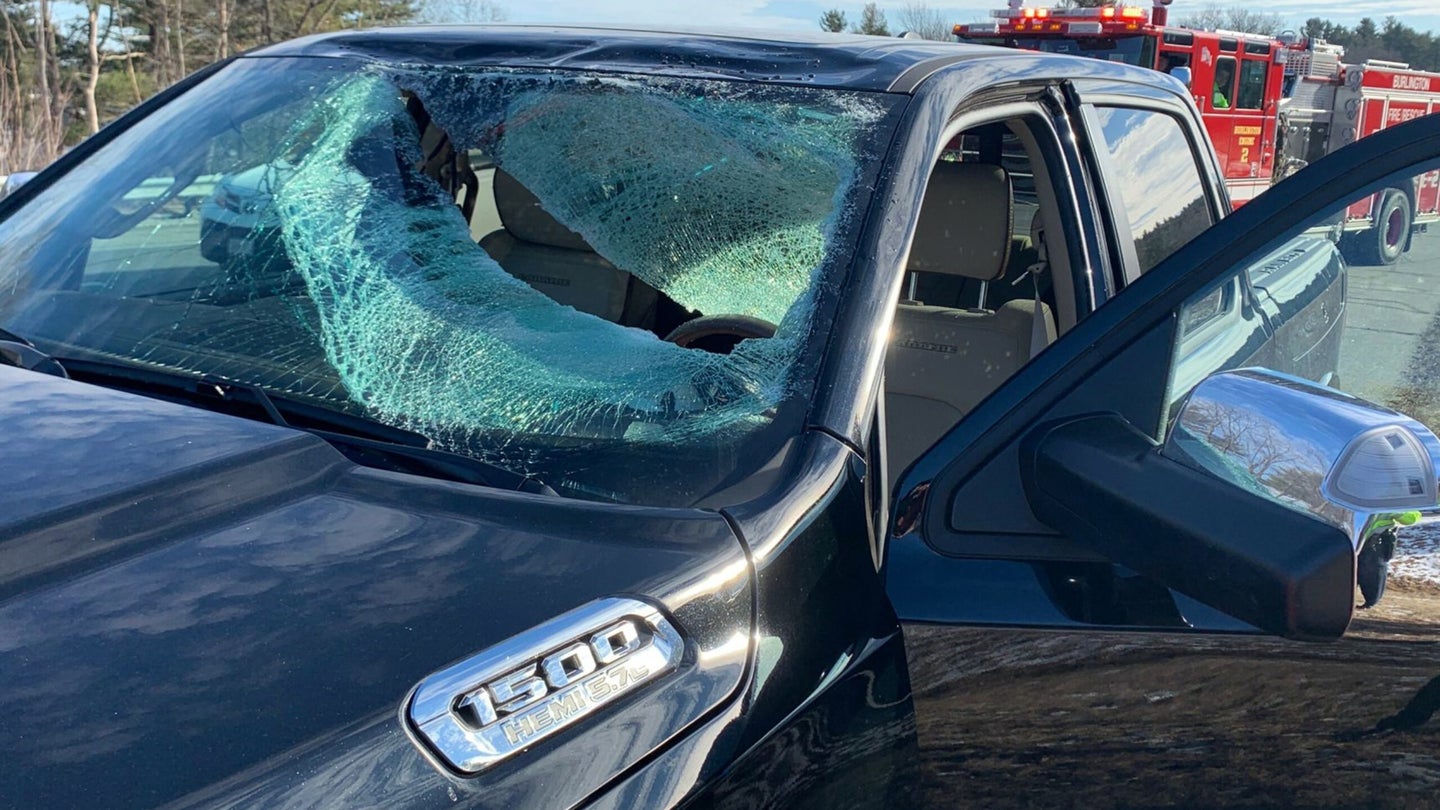 A driver was seriously injured on Thursday after a giant chunk of ice flew off the top of a box truck and smashed through the windshield of his 2019 Ram 1500 on a highway in northern Massachusetts, CBS Boston reports. A three-year-old child who was riding in the pickup also received minor injuries. All this because someone didn't clear snow off of their vehicle—seasonal negligence that's becoming too common year after year.

The incident occurred along Route 3 in the town of Burlington late Thursday morning, with the pickup directly behind the box truck when the large ice chunk came crashing down. The Ram driver, an off-duty Newton firefighter identified as 38-year-old Eric Travers, was able to pull over safely and contact authorities despite serious injuries to his face and upper body. His injured three-year-old child was also transported to Massachusetts General Hospital for treatment, along with two other passengers in the pickup who didn't require medical attention.

“The sheer weight of the ice, it struck the vehicle, it was a big sheet of ice so we’re lucky that this didn’t result in a worse situation,” Burlington Fire Chief Michael Patterson said to Boston 25 News. “Very dangerous when people do not clear the roofs, whether it’s a personal vehicle or a large 18-wheeler truck—very dangerous.”

Authorities later tracked down the box truck in question, a moving truck owned by a local company in New Hampshire that's a subsidiary of United Van Lines. The driver claimed that he didn't know there was any ice on the truck's roof and was issued several warnings.

Pictures of this specific incident’s aftermath may be worth a thousand words, but it’s an entirely different and nerve-wracking experience when you actually see a giant piece of ice come flying at you while driving on the highway, like in the video below.

There’s no excuse why anyone shouldn’t be able to remove ice or snow from their vehicle. All it takes is a cheap scraper or snow brush with a long handle and a booster stool if you have a high-riding vehicle. Just don't be this woman and do it on the go.

“Whether it’s snow or ice, ensure that you clean your complete vehicle, not just a small portion of the windshield,” Patterson concluded. “These are absolutely incidents that, in my opinion, are preventable.”

So the next time you’re thinking that the wind will take care of the snow and ice removal for you as you drive, think again. You’re putting other lives at risk.