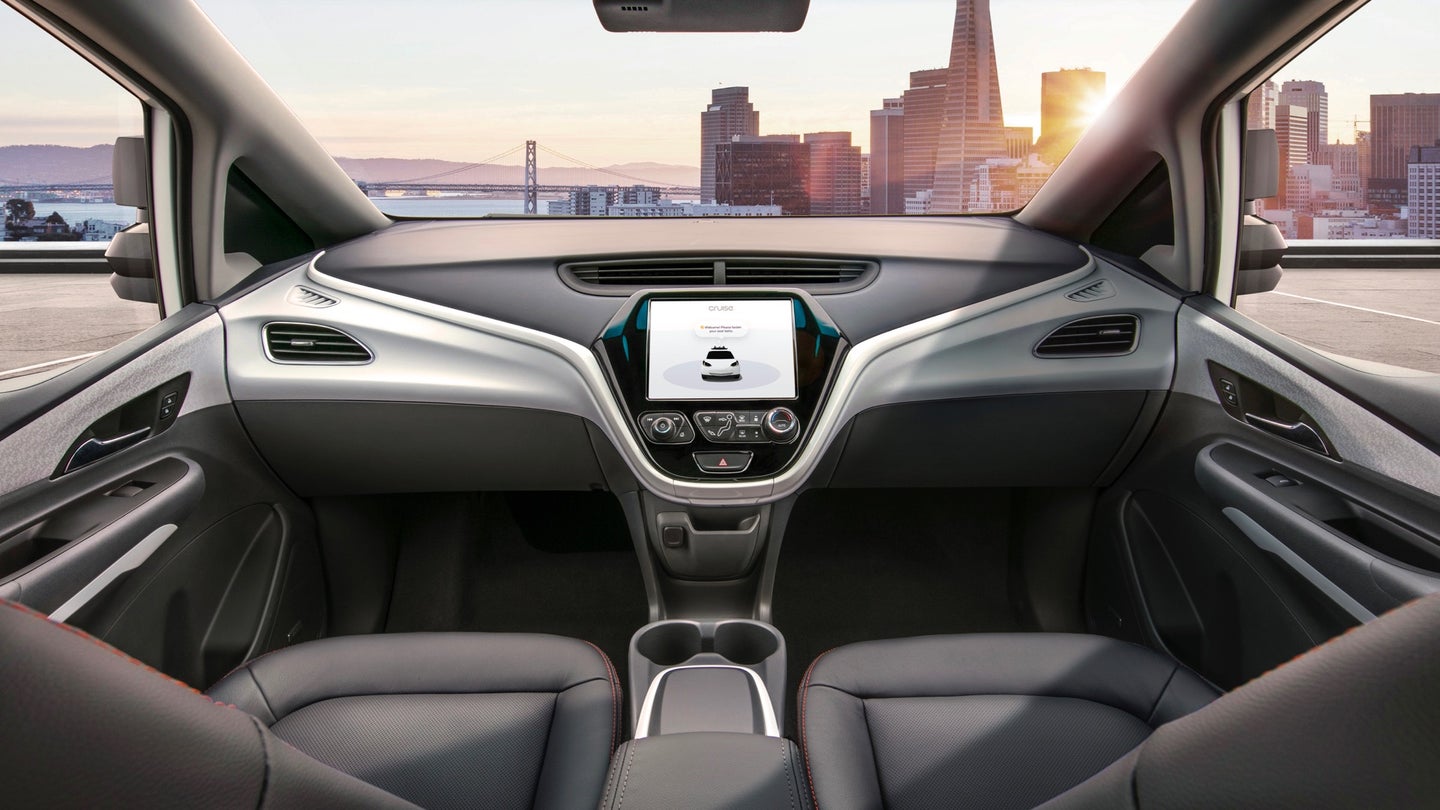 General Motors claims to have finally done what its rivals have only discussed: Build a self-driving car with no steering wheel or pedals. Called the Cruise AV, GM hopes to put it on the road in 2019. But because cars with no manual controls violate current Federal Motor Vehicle Safety Standards, GM needs to get permission from the U.S. Department of Transportation first.

A photo of the interior is all we have to go on, but judging by the fact that it looks like a Chevrolet Bolt EV interior with the steering wheel, pedals, gauges, and shifter Photoshopped out, we think it's a safe bet that the car will be a modified Bolt EV. GM's Cruise Automation division already uses Bolt EVs as autonomous test mules, after all.

GM said the Cruise AV is its fourth-generation self-driving car, but even the third-generation models currently being tested are capable of operating without a human driver, the company has said. GM believes there are enough redundancies that the car can handle itself even if certain components fail.

This was explained in greater detail in the self-driving safety report GM released along with the Cruise AV interior photo. The report notes, for example, that current GM self-driving cars have redundant hardware for steering and braking and electrical power. Signals between the car's various components can be sent along different paths the primary connection fails. The cars also have a backup braking system independent of the autonomous-driving system that activates if a crash is imminent.

Like many other companies, GM says the goal of self-driving cars is to eliminate crashes. But no matter how safe GM makes the car, it can't account for the environment. Self-driving cars operate by GM's Cruise division have already been involved in some fender benders, usually involving other road users crashing into them. Right now, self-driving car safety is as much about convincing people to trust the technology as reducing crashes. Companies need to get large numbers of self-driving cars on the road before they can focus on that.

GM has petitioned the Department of Transportation for permission to operate cars with no human driver and no manual controls on public roads. The company needs special dispensation because current Federal Motor Vehicle Safety Standards specifically call for manual controls. For now, GM says that where the rules cannot be met because they are human-oriented, "the vehicle will meet the safety purposes of those standards and we will petition for exemption."

GM previously said that it planned to launch an autonomous ride-sharing in select cities in 2019. In its safety report, the automaker said the Cruise AV complies with all applicable state and local laws in "its operational design domain," implying that the company has locations in mind. States that have a friendly attitude toward self-driving cars, such as California and Arizona (where GM already tests) seem like probable candidates.