The completed ‘Stang is more than a foot long and has cool customization pieces like a supercharger and multiple license plates. 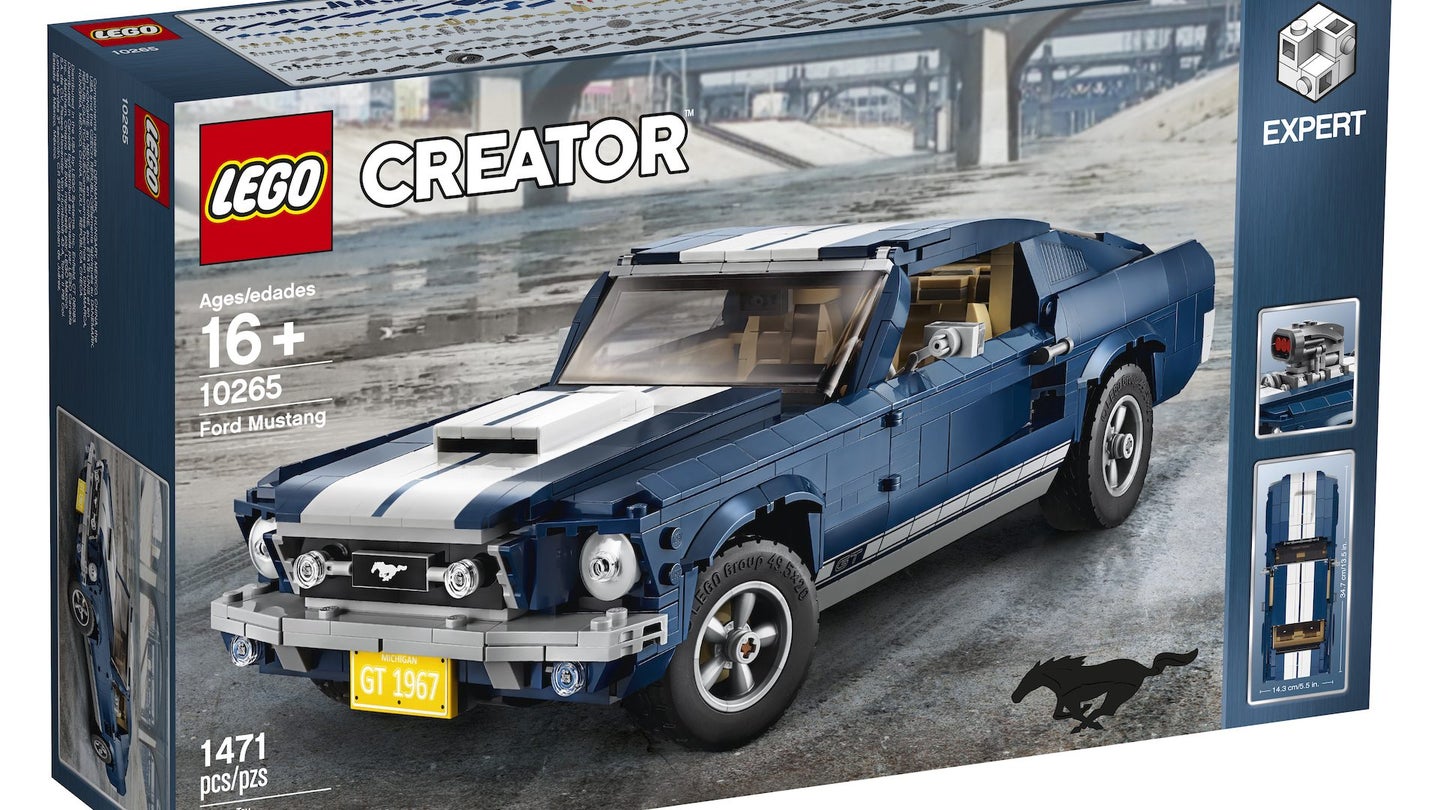 Lego has revealed a new set from its "Creator" line modeled after a 1967 Ford Mustang GT fastback, complete with a scaled-down version of its carbureted 390 cubic-inch (6.4-liter) V8.

This set is comprised of 1,470 pieces and features four elements never before cast by the famous brick company. When assembled, the Mustang stands almost four-inches-high, nearly six-inches-wide, and more than 13-inches-long.

Builders can have their Mustangs in any color, as long as that color is blue with white racing stripes. Individualizing one's own Mustang can be done with a plethora of optional parts, all of them performance-oriented. Plucking off the car's hood scoop allows a view of the V8's air cleaner, which can be covered up by a hulking supercharger assembly that protrudes from the hole in the hood.

Contributing to the hot-rodder aesthetic are optional side-exit exhausts and an adjustable rear ride height, which can hike up to alter the model's stance. An air dam or rear ducktail spoiler can also be installed to accentuate these rear-up, front-down proportions. Popping open the trunk can reveal a hidden nitrous-oxide bottle to complete the look.

Five custom license plates—one commemorative, four regional—can be swapped out on a whim.

This Mustang isn't exclusively a static model; the steering is functional, though adult-sized fingers may need to open the model's door or remove its roof to crank the wheel.

Mustang fans eager to pick up this model can do so when the set goes on sale online or in brick-and-mortar Lego stores on March 1, for the price of $149.99. Chevrolet hardliners can look instead to a Corvette ZR-1 Technic set, while creative types with a more exotic taste or those in the mood for a bigger (and more expensive) challenge can instead pick up Lego's licensed Bugatti Chiron set, which demands $350 for 3,599 pieces. If assembling that sounds like too much of a pain, watch a time-lapse of us building the Bugatti instead.

The Ford Mustang Could Score a New, More Powerful Turbo Engine in 2020

It will allegedly fill the gap found between the four-cylinder EcoBoost and V8-powered GT.