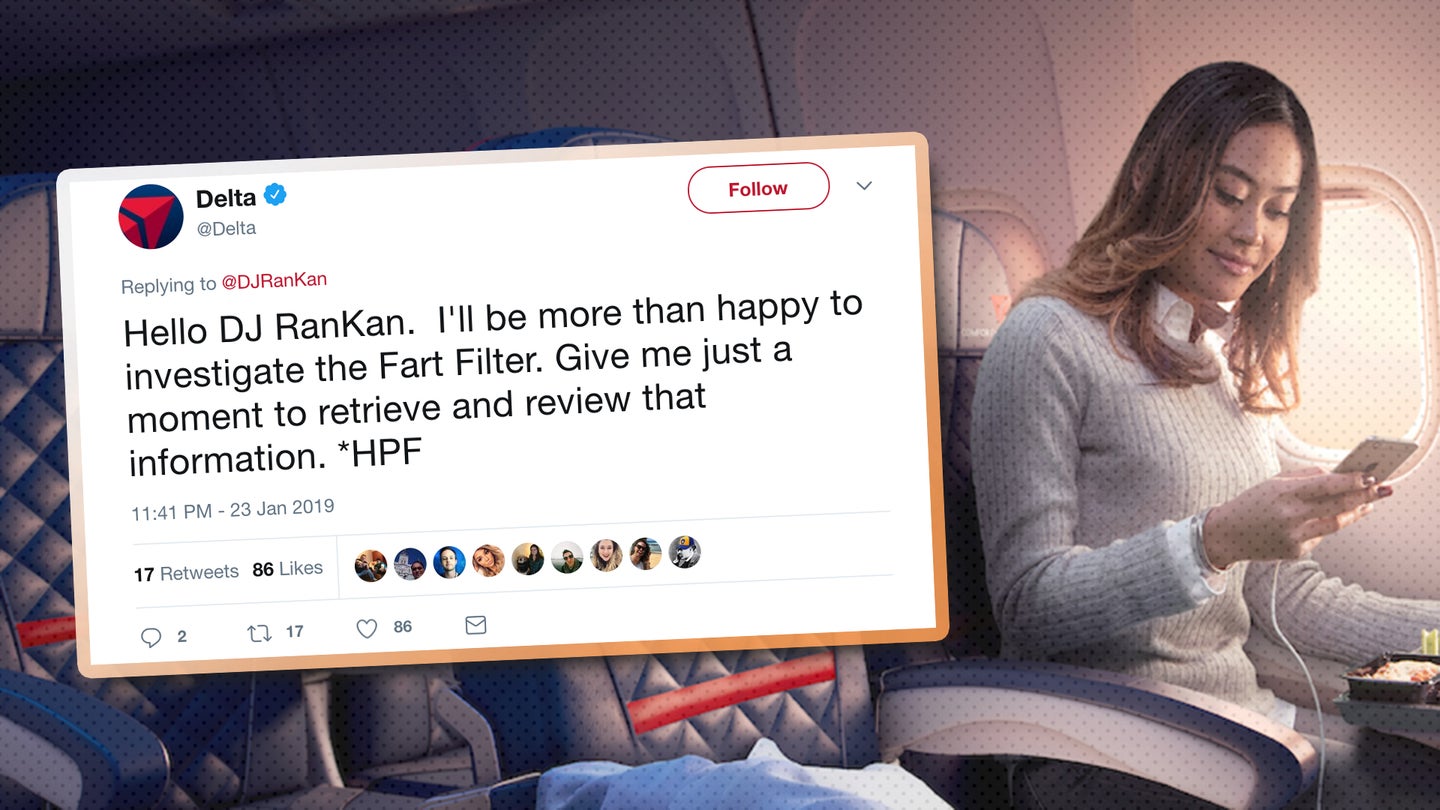 Everybody farts. It's one of those comforting truisms in life—until you're crowded into an enclosed space with 300 other people, forced to breathe in some choice flatus. A Delta Airlines frequent flier recently raised that very concern to the company on Twitter, and surprise of surprises, whoever runs the account took it seriously enough to provide the answer we've all been waiting to hear. Short answer: Yes, there is a fart filter on planes. Sort of.

The flatological story started off when a Twitter user named DJ Rankan posted a frightening statistic claiming passengers expel around 368 liters (that's about 13 cubic feet) of gas during the average flight and pleading with Delta to say there's some sort of fart filter on board. That number is in fact a little bloated—it comes from this non-scientific study by The Sun last year, and it's their guess at how much gas the 525 passengers on a fully-loaded Airbus A380 would pass in total during a 13-hour flight. Still, the visual of 13 cubic feet of pure fart is an arresting one.

This is the kind of out-there question that a brand's social media account studiously avoids. Not here. "I'll be more than happy to investigate the Fart Filter," Delta tweeted, as if responding to a complaint about a delayed flight. "Give me just a moment to retrieve and review that information. *HPF."

HPF, the hero we need. After a few tense minutes, the health and safety of modern air travel hanging in the balance, HPF came back with some fun facts about air filtration. "These systems actually gradually allow the air to seep out of the cabin, while bringing fresh air back in. So, do we have a 'Fart Filter'...  Not really, we just allow the airplane to fart the human farts out of the aircraft..."

We often imagine the air inside a plane as a stagnant mass of free-floating nastiness. It's true that not much can be done if a virulently sick person boards and spreads their germs to other passengers, and that the decrease in air pressure makes flatulence more likely. But modern planes used advanced, almost hospital-grade filtration setups that use a combination of outside and recirculated air to keep things as fresh as possible in a sealed metal tube 30,000 feet in the air.

For those concerned about the fart situation—or maybe something actually worrisome, like influenza—here's how it works. Fresh air gets bled from compressed supply sucked in by the plane's gas turbine engines. It's incredibly hot at this point, up to 390 degrees Fahrenheit, so it moves through a combination of heat exchangers and a cooling system to bring it down to a comfortable temperature.

Those "packs," as HPF correctly calls them, send the cooled air into the cabin through the plane's air-conditioning ducts. It circulates for a while before moving down into the belly of the plane; at that point, about half is released back into the atmosphere through one-way outflow valves. The other half, containing the gas, germs, hopes, and dreams of the souls onboard, cycles through a large multi-stage filter before mixing back in with the external air supply and re-entering the cabin.

So yes, there is a filter, and ideally it removes the sulfuric compounds that give farts their characteristic smell. Does that make it an official Fart Filter? The rest of a toot's volume is chemically similar to the air we breathe, mostly nitrogen, oxygen, hydrogen, and methane. The system isn't going to remove those gases, so it's possible you're going to breathe in a few molecules that were previously ensconced in someone else's colon over the course of a flight. But between the fresh supply and advanced filters, you're generally not spending more than a few minutes directly inhaling the exhaust fumes of others.

According to Boeing, their planes are capable of taking out between 95 and 99 percent of airborne contaminants, and the cabin's air is completely refreshed in under five minutes. That process isn't quite as quick when the plane is slowly taxiing. But the air is constantly cycling in flight, even if half of it is being reused.

This all might seem trivial—farts pose zero health risk, potential gag-inducing smell aside—but anyone who's ever been on a long-haul flight knows the feeling of dread that creeps alongside an invisible cloud of stank.  Of course, anyone who's ever gotten sick after a flight will also tell you that a few minutes are all it takes to pick up actual germs.

Making this whole thing all the more hilarious, the original Twitter thread concludes with the most customary of customer support sign-offs. "I hope this information was helpful. Is there anything else I can do to assist you tonight? *HPF"

No, HPF. You've done plenty for the world already.