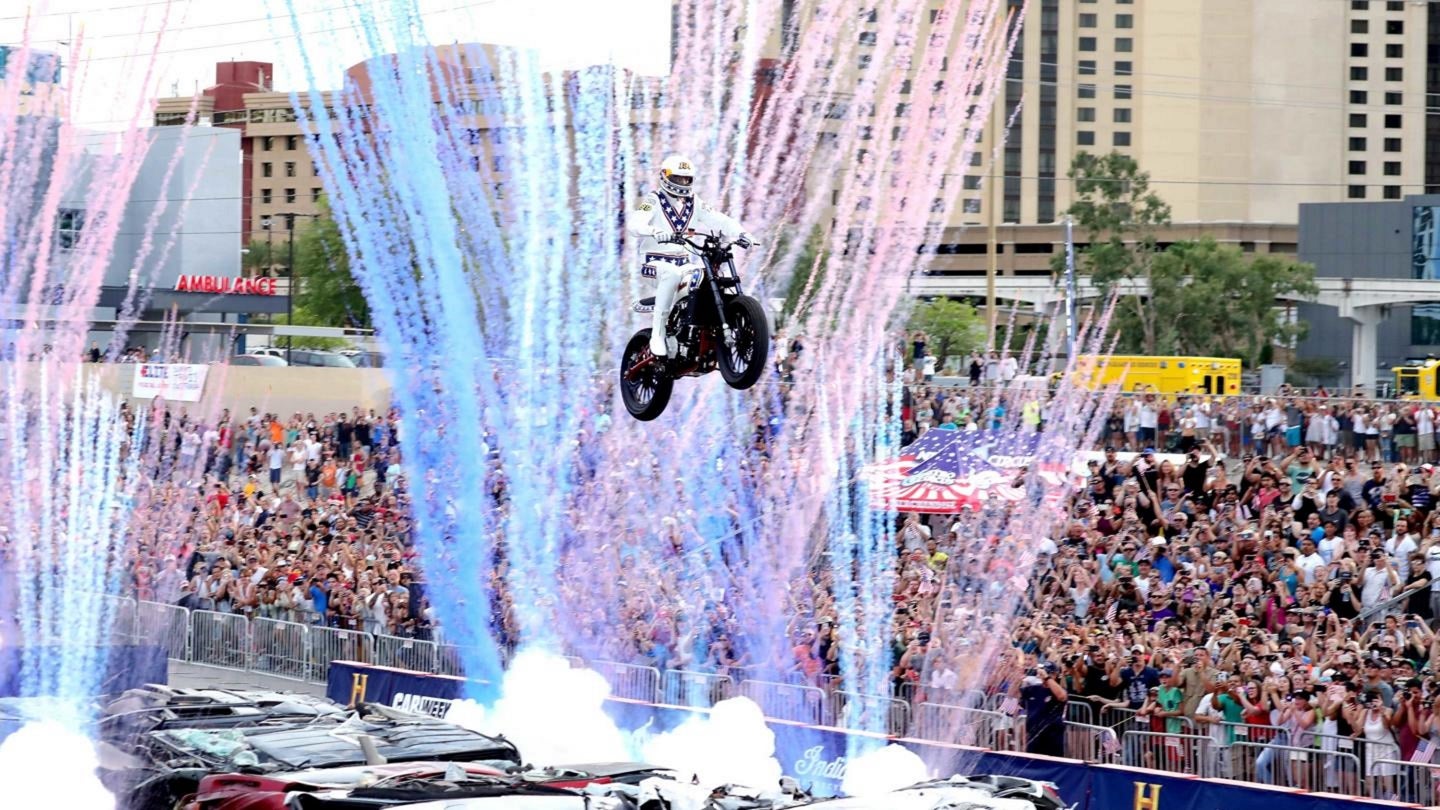 Motorsports icon and modern-day daredevil Travis Pastrana nailed all three of attempts to recreate a trio of Evel Knievel’s most iconic jumps in Las Vegas on Sunday night in an event that was broadcast live on History Channel. He accomplished these jumps on a modified Indian Scout FTR750 flat track bike which has been dominant in American Flat Track for the past two seasons and is now a world record-holder for longest distance jumped on a two-cylinder motorcycle.

Pastrana started the night by breaking Evel’s record of jumping 50 crushed cars, soaring 143 feet through the air over 52 crushed cars. He made it look easy with plenty of ramp space to spare. The second jump involved breaking Knievel’s record of jumping 14 Greyhound buses by jumping 16 buses for a total of 192 feet; and again, he made it look easy. It's worth noting that these buses are five inches wider and five inches taller than the ones Evel jumped.

The third and final jump was reenacting Knievel’s legendary attempt to jump the Caesar’s Palace fountain. Knievel famously did not stick the landing when he tried this stunt in 1967 and broke more than 40 bones. Pastrana has much better luck and made the jump successfully and it was actually a shorter distance than the bus jump at only 149 feet. The trick to this one was clearing the 15-foot-tall fountain.

Since Evel Knievel was all about showmanship, so was Pastrana last night. He was clad in a fabulous red white and blue suit and helmet with stars and stripes much like the ones Knievel wore in his hay day. Pastrana even wore a cape which was removed for the actual jumps.

The Indian Pastrana rode was modified a bit to make it more suitable for the jumps. A different handlebar was used and a front brake was added so he could slow the thing down after flying through the air. The most noticeable difference was the paint job which was done courtesy of Roland Sands. This RSD paint job was a throwback to Evel Knievel’s old bikes and suits with a star-spangled theme to match Pastrana’s suit.

Travis Pastrana has experienced over 200 bone fractures in his career, but thankfully he avoided adding to that tally last night. Pastrana showed more than enough skill and showmanship to pay a proper tribute to the greatest daredevil of all time.

The History Channel will have a live broadcast of the stunts on July 8.