You can have the latest sports sedan any way you like it, as long as it's not a wagon. 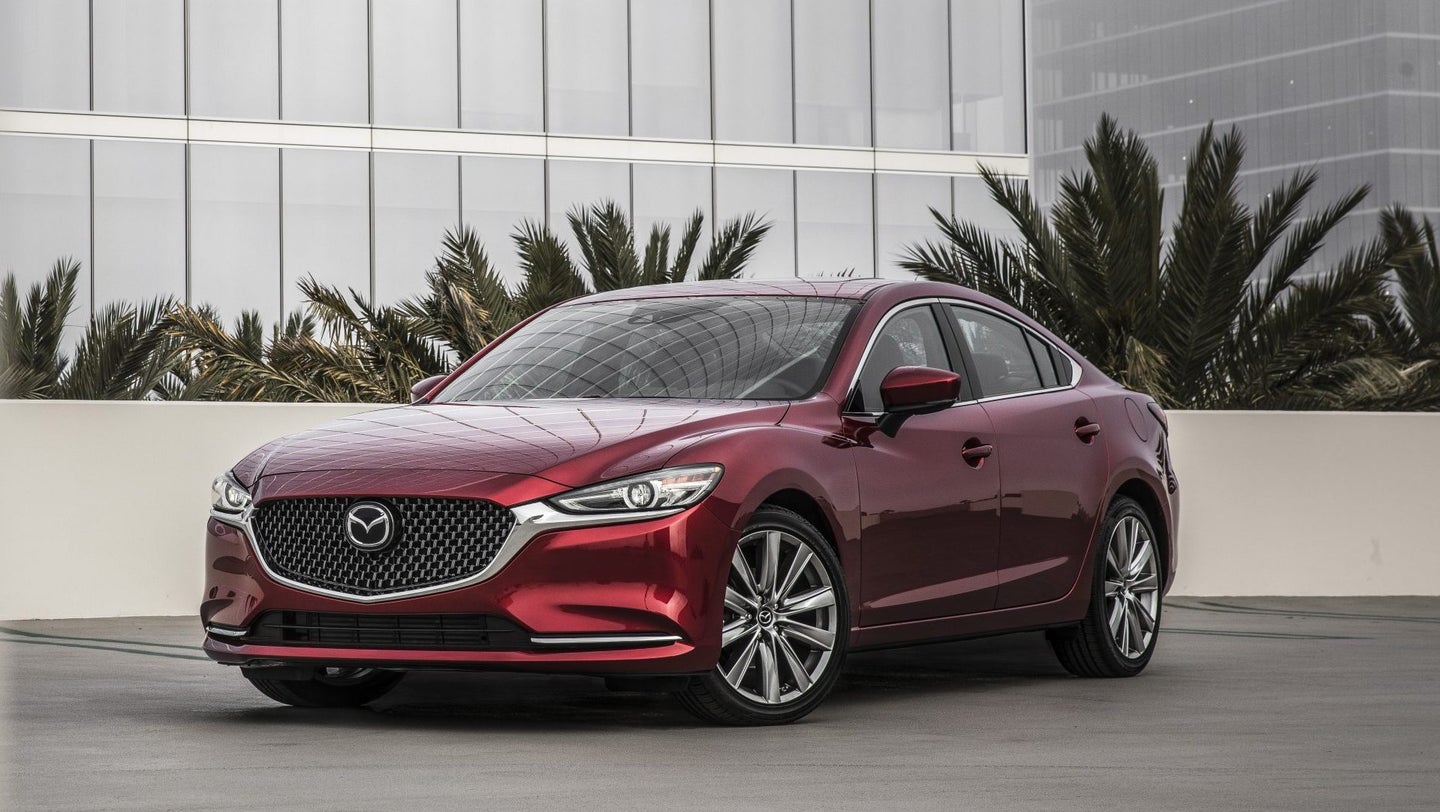 On Thursday, Mazda released pricing, package, and powertrain information on its overhauled Mazda6, which will arrive at dealerships next month. Despite a Mazda6 wagon making its rounds, Mazda confirmed to The Drive that the United States will only receive the sedan body style, citing the company's crossover offerings as adequate for fulfilling American market desires.

Retail pricing begins at $21,950, for the Mazda6 Sport with a six-speed manual transmission and the Skyactiv-G 2.5-liter 4-banger, which produces 187 horsepower and 186 pound-feet of torque. An additional $1,050 swaps the manual for a "quick-shifting" six-speed automatic transmission with a sport mode. Available solely on the automatic transmission is cylinder deactivation, making the Mazda6 the only vehicle with a four-cylinder engine available in North America with this technology.

An additional $625 on and automatic Mazda6 Sport fetches the i-Activsense safety and convenience package, which includes lane assists, automated cruise control and emergency braking, and condition-sensitive headlights and wipers.

i-Activsense and the six-speed automatic are standard on every package above Sport, starting with the $25,700 Touring model, but Mazda is adamant that the Mazda6 remains an enthusiast car, across all trim levels.

In addition to the options listed, Touring includes 19-inch wheels, keyless entry, and faux leather seats. Those up front can enjoy a moonroof, heated seats, and a power-adjustable driver's seat, whereas the back gets HVAC ducting.

Grand Touring vaults the price to $29,200, but it brings with it the turbocharged version of the Skyactiv-G 2.5 engine, which produces near-instant boost from its Dynamic Pressure Turbocharger, by way of valves that keep exhaust manifold pressures high, spooling up the turbo with gusto, and later opening a second valve to keep the engine's breathing easy under load. Peak power is 250 horsepower and 310 pound-feet of torque on 93 octane fuel, though output dips to 227 horses with the use of 87 octane.

Mazda declined to attach any zero to 60 claims to the turbocharged Mazda6, stating a policy of leaving benchmark testing to outside sources.

A peripheral powertrain upgrade also arrives with the Grand Touring package: Paddle shifters. Interior amenities improve too, with a navigation system and satellite radio (with a temporary trial) playing through an 11-speaker Bose audio system. Mirrors dim automatically, and warm to clear themselves of ice.

Still beyond is the Grand Touring Reserve package, at $31,700, which offers heated, leather-trimmed seats front and rear, with both front seats adding ventilation and improved power adjustment. The driver is comforted by a heated steering wheel, and aided by a HUD and system that reads traffic signs. Forward view is kept clear by self de-icing wipers and active headlights. Exterior alterations include silver alloy wheels and a rear spoiler.

The top package, called Mazda6 Signature, changes seat material to Nappa leather, and adds Japanese Sen wood and Ultrasuede trim elsewhere. Driver spacial orientation is augmented with parking sensors, a frameless mirror, and a 360 degree view monitor. The gauge display can be tailored to the driver's needs, and the added gunmetal grille is exclusive to the Signature package.

While rumors circulated about a possible all-wheel-drive powertrain propelling the 2018 Mazda6, the sedan will not feature all-wheel drive at launch in the United States. Mazda's Jacob Brown, however, did not count out a future introduction of all-wheel drive as an option on the Mazda6.

"We have no plans to introduce [all-wheel drive] in the U.S. at this time for Mazda6, but we will continue to study introducing features that customers value, as our CEO has stated in some interviews."