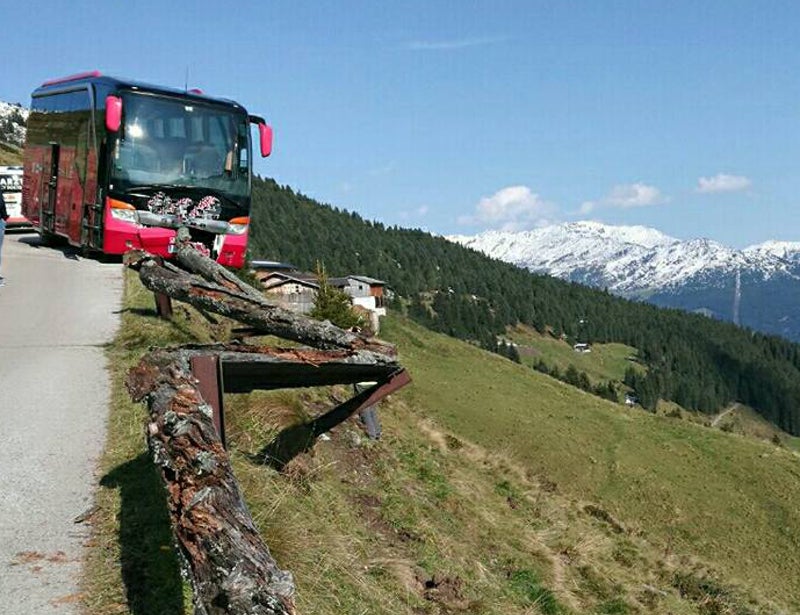 Twenty-two people are lucky to be alive today after a heroic bus passenger lept into action when their driver passed out behind the wheel, managing to apply the brakes just as the coach crashed through a wooden guardrail above a 300-foot drop in the Austrian Alps, the BBC reports.

The tour group was traveling on a rural road in the Tyrolean Alps in Austria on Saturday when the 76-year-old driver somehow became incapacitated. The passenger, a 65-year-old man from France, was seated nearby and noticed the situation unfolding just in time. What happened next was a true action movie sequence in the BBC's telling, with the Frenchman vaulting into the driver's seat and reaching the brake pedal just in the nick of time as the bus veered off the road. It came to a halt with its front left wheel dangling over the edge of the drop off.

Pictures from the scene show just how close things came to an unmitigated disaster. Had the passenger not been able to stop in time, the bus would have rolled many, many times on its violent trip down the incredibly steep slope. In the words of a local police official, they were "a hair's breadth from catastrophe."

It's possible the wooden guardrail spearing into the front of the bus slowed it down somewhat as well, but still, it's clear the quick actions of that passenger saved quite a few lives this weekend.

Dozens more escaped a fire that quickly consumed the tourist bus after a collision with a truck.