But the newest Bimmer has some big shoes to fill. 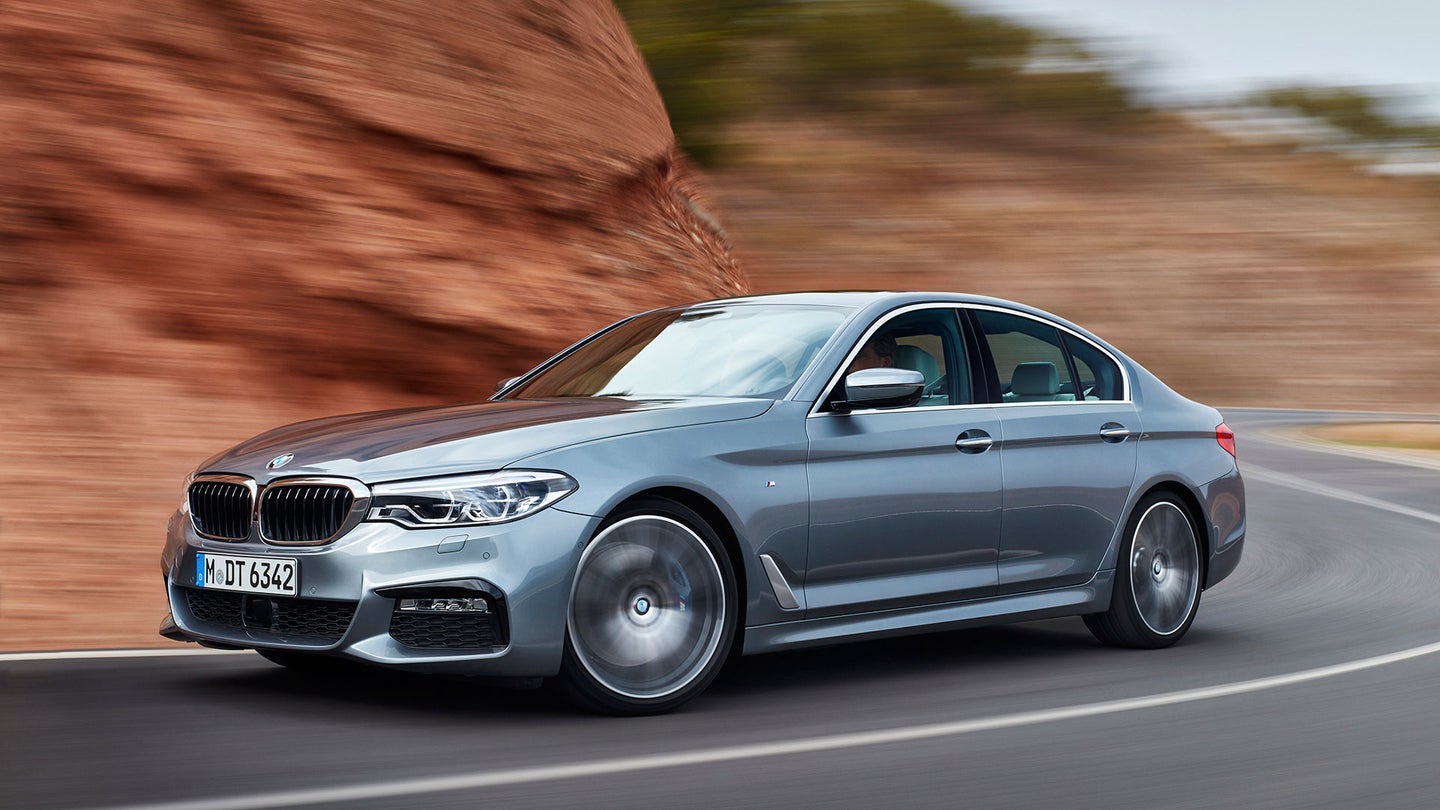 Automotive models come and go, but few have managed to pack the staying power or make the influence that the BMW 5 Series has over its many generations. When it arrived in the early 1970s, it landed in a world where “luxury car” usually meant a sedan or coupe with the dimensions and handling of an oil tanker. Over the subsequent years, it helped alter American perceptions of high-end four-doors, leading buyers to associate them with sportiness and speed as much as comfort and features—a movement that reached its pinnacle with the adored fourth-generation 5 Series, known both at BMW headquarters and among legions of educated fans as the E39.

Since then, however, the 5 Series has stumbled a bit. BMW’s corporate mission was turning away from creating ultimate driving machines, instead charting a future-minded course where technological features mattered more than driver engagement. Sales for the subsequent E60 and F10 generations remained strong, but both cars were largely seen as dynamic disappointments compared to their predecessors.

The new seventh-generation car—internally known as G30—seeks to bridge the gap between those two missions. It’s BMW’s latest attempt to show the world that technological prowess doesn’t have to come at the expense of driver involvement, that cars capable of driving themselves can still be entertaining when the pilot wants to seize manual control.

And it pulls it off…more or less.

At first glance—especially on a screen or a magazine page—you might be hard-pressed to know how this latest model differs from the past one. Take in the lines for a few moments, though, and it’s hard to deny the appeal of the design. It’s evolutionary, melding the general proportions of the previous 5er with the sleeker lines of the current 7 Series. BMW has always been one of the best in the industry at making its cars look similar without turning them into carbon copies of each other, and the G30 keeps that trend going.

Climb inside, and BMW’s focus on technology starts to become more apparent. The instrument panel is mostly digital in the way Westley of Princess Bride fame was mostly dead; almost all the information is presented on an 8.8-inch screen, yet for some reason, the arcs of the speedo and tach are both partially rendered in physical form.

Mounted high atop the dashboard lies the portal to many of this new BMW’s electronic tricks: iDrive. Or, to be more specific, iDrive 6.0, the latest iteration of the automaker’s infotainment setup that has grown from a maligned menace to one of the best such systems on the market. The latest version, which uses a 10.25-inch touchscreen that can also be controlled by a rotary clickwheel, offers customizable live tiles on the home menu, enabling you to see, say, a miniature map, the current music, and the weather simultaneously. (Not sure why you’d need an app to tell you the weather when you’re already in a car, but then again, I’m not sure why people watch NCIS, either.)

If those two displays weren’t enough, BMW also offers an updated, full-color head-up display that’s 75 percent larger than the one in the previous 5 Series, enabling drivers to see more information than ever. Unless, of course, they happen to have taken their optometrist’s advice and sprung for polarized sunglasses, in which case it becomes harder to read than John Galt’s infamous monologue.

Through the instrument panel and iDrive, owners can tap into the new 5 Series’s stunning array of technological wonders. Using the network of cameras mounted around the car, it’s possible to not only see what’s on every side, but to digitally manipulate the view with your fingertip, dragging a remote 3-D view of the vehicle around to get a better sense of what’s around. You can even do this on the BMW Connected smartphone app, which also lets you beam directions or other information straight from your tiny black mirror to your car.

iDrive can also sync with your iPhone using CarPlay, either via USB cable or over Bluetooth; Android Auto, however, remains on the wishlist. (Simon Euringer, head of the company’s Silicon Valley tech office, claims most BMW customers use Apple products, anyway.)

It’s happy to work with Amazon, though. Should you have one of those Echo Alexa devices in your house listening to everything you do, you can set it up to lock or unlock your car with a word. (The forthcoming plug-in hybrid 530e model will give Alexa more to do; on that model, she can check the car’s state of charge or range).

And when it comes time to park, the 5er’s suite of technology is there to help once more. Not only can the ParkNow service book spots in garages ahead of time, the newest BMW is the first car to use current data and historical information to predict where to best find an on-street parking spot. And should that spot be too tight to sneak into, the car gives drivers the ability to use the optional Display Key to park the car via remote control.

It’s in the driving, though, that this Bimmer proves itself a true window into tomorrow. Bring the excellent intelligent cruise control and lane-keeping assist systems online in concert, and the 5 Series proves itself capable of autonomous operation for significant lengths of time.

“I’m not gonna give you the real number, but [it’s] over 30 seconds of hands-off time,” BMW product planning manager Rich Steinberg told the assembled mass of journalists at the start of the media drive. Rich was being cagey. I managed over a minute of touch-free driving on multiple occasions before the steering wheel icon on the instrument panel that indicates lane-keep is active began flashing an angry red in a frantic gesture to get me to take control. And that was at highway speeds; in slow-moving traffic, the 5er was happy to putter along without my input for entire pop songs. It’s still a long way off from being an honest-to-God self-driving car, but it’s the best Level 2 autonomous driving experience I’ve experienced.

As for the non-autonomous driving experience…well, it’s clear the carmaker is finding its way back to driving bliss, but it still has a few miles to go. The steering is definitely an improvement; it generally comes across as more natural than the previous 5 Series.

But it shows its Achilles’ heel on tight, winding roads, where—at least on my test cars—some combination of the lack of feeling, the variable rack, and the rear wheel steering system all team up to make it hard to accurately place the car. In those circumstances, it’s hard for your hands and inner ear alike to judge exactly where the car is going, which often leads to trouble hitting the apex—and more disconcertingly, can leave you feeling a bit carsick. The steering sorts itself out as the speeds grow higher and the turns grow longer, though, suggesting this big Bimmer is made for the open road. (Pro tip: Leave the car in Comfort or Adaptive modes, which give the wheel less artificial weight.)

Both engines are dynamite, as you’d expect. The 540i is obviously the faster of the two—BMW says the xDrive version rips from 0 to 60 mph in 4.7 seconds—but I was more impressed with the 530i, which was more than potent enough to handle any circumstance a non-M 5 Series would be liable to find itself in. Even loaded down with four well-fed journalists and their luggage, it was able to rip through traffic without issue. That said, considering the 540i is only five grand more…I’d probably try and swing it.

Both the 530i and 540i I spent time with were equipped with the M Sport suspension, which is bundled up with the likes of an M steering wheel, 19-inch wheels, and more aggressive front and rear fasciae in the $2,650 M Sport package. The lowered, performance-minded setup lives up to the promise made by that capital letter, helping the car track flat and ride steady during fast-paced drives and sudden lane changes; if anything, it occasionally seems overly aggressive, letting bumps intrude into the cabin in a way a luxury car shouldn’t.

Minor quibbles aside, however, the latest Bimmer sedan does a damn fine job of moving the goalpoasts for the mid-sized luxury class. While the world may be uncertain these days, the 5 Series’s place in the heart of BNW’s lineup seems unthreatened. With almost 1.25 million 5ers sold in the U.S. since 1975, the car has the sort of customer base upstart luxury brands (and a couple of stalwart nameplates) would kill for. Considering the seventh generation’s credentials, it’s hard to see many of those loyal buyers deserting the brand for Audi, Mercedes-Benz, or Cadillac anytime soon. And with its improved styling and top-tier tech features, hell—it might even win itself a few converts.