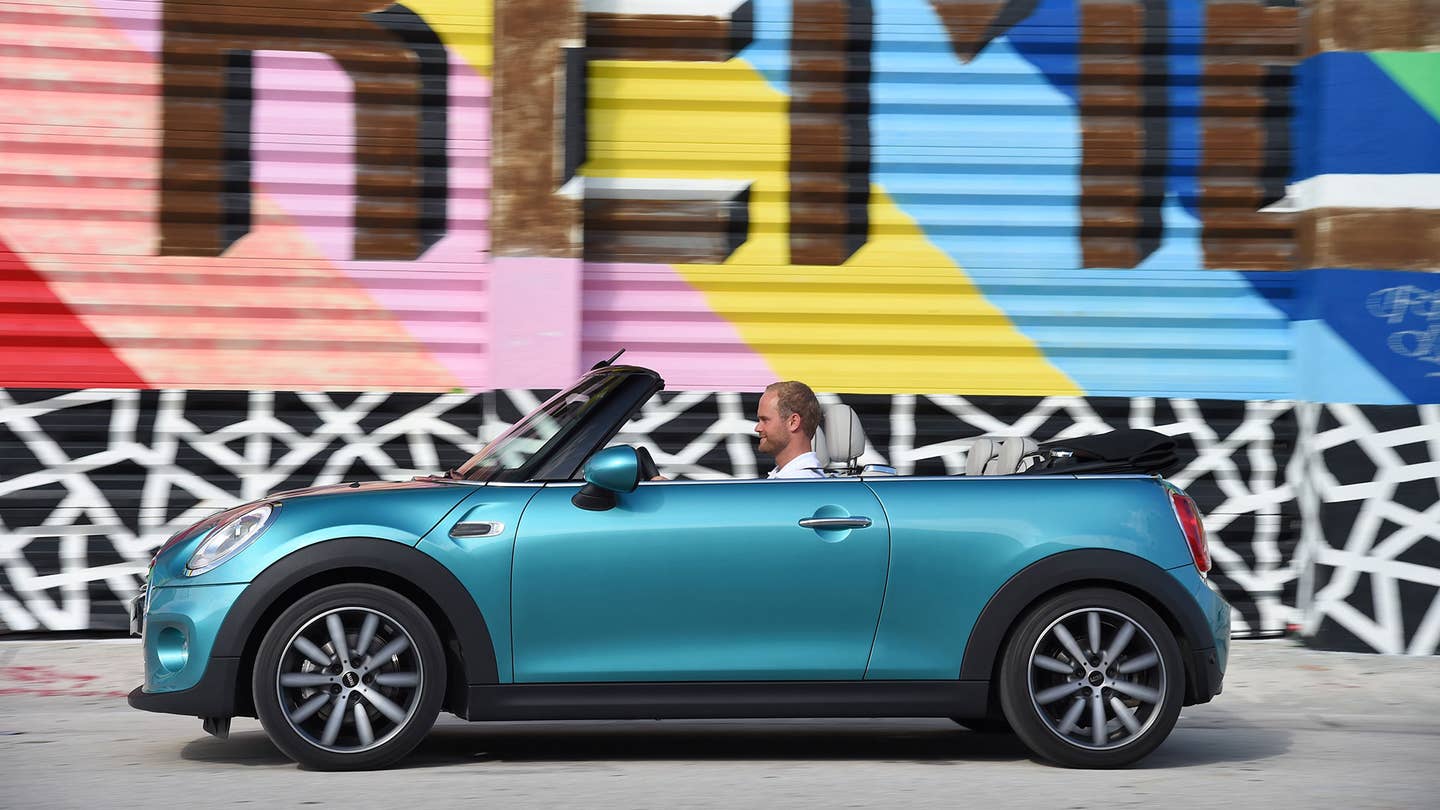 With clockwork predictability, Mini announced the release of the convertible version of the new-generation Cooper on Oct. 22. There are few surprises: The drop-top city slicker gets the same two-stage, partial-open sunroof and full open; the same goofy "Always Open Timer" to track how much you drive topless; and (presumably) the same enormous blind spots when the roof's up. If you'd like, you can now get a Union Jack emblazoned on your folding roof.

Granted, the updated hardtop Cooper that bowed early in 2014 is a lovely thing, with a choice of six-speed manual (yes!) or six-speed automatic, and a pair of turbocharged BMW engines. Replacing the base 1.6-liter four-pot is a 1.5-liter three-cylinder turbo making 134 horsepower and 162 pound-feet of torque. The Cooper S version is treated to a 2-liter turbocharged four-cylinder with 189 hp and 207 lb-ft. Length increases by 4.5 inches, while girth expands 1.7 inches. Performance is up.

It all sounds a bit something you might find in your spam e-mail folder. Longer. Wider. Heavier. More powerful. As a continuation of the ideals first espoused by the British Motoring Corporation's clever little Sixties people-mover, the all-caps MINI grows ever more unfaithful. Cute, sure, but Sir Alec Issigonis never woke up in the morning and thought, “Hey, how 'bout a three-doored crossover?"

You know who else never woke up with such thoughts? The engineers of the Mazda Miata, a fearsome benchmarker in this me-first segment.

That said, in a fuzzy product lineup where kitschy whimsy seems the defining proposition, the base Mini Cooper droptop should be a hoot. In the standard hardtop, the offbeat three-cylinder warbles away with flatulent turbocharged parpling, doling out excellent torque yet still begging to be wrung to redline. Get that roof down on a leaf-strewn backroad and revel in the scooty, darty character of a car that maintains some spirit—despite its embiggened footprint.

Yes, it looks like a concussed frog, but you at least will be grinning.