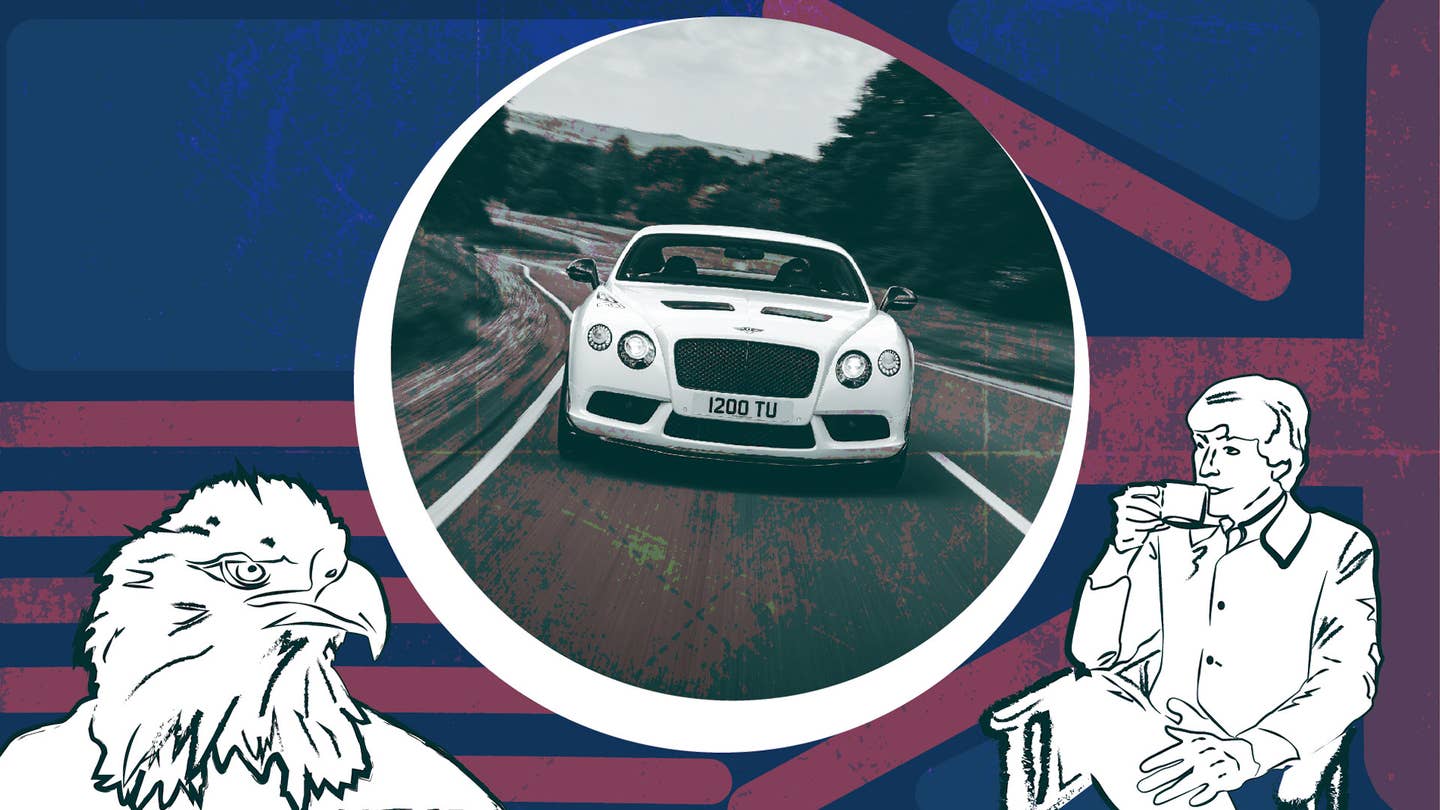 It's natural that your brow would furrow when you first see a Bentley Continental GT3-R. W.O. and the Boys’ heritage lies in refined luxury, adhering to design tenets that result in vehicles both modern and timeless. A Bentley may be loud in its exhaust note, but never in appearance.

Which leaves me wondering why the crew at Crewe saw the need to sticker the bejesus out of the epitome of the two-door line, the Bentley Continental GT3-R. Green and black linear decals perch atop the fender haunches, as if to demonstrate this is a quick beast. That wasn’t enough, however, so the carmaker added the marque’s name at opposite corners. Why, Bentley? That’s a move typically reserved for souped Hondas, Acuras, and other ricer machines, not an upper-crust, $341,000 specimen of speed. I’ll forgive the carbon fiber spoiler, because that’s not as egregious as the vinyl adhesions.

But all grousing subsides the minute your hand moves the knurled shifter into “Drive” and your foot sinks the drilled alloy accelerator to the floor. Who cares what it looks like when a crushing wave of fast is slamming you in the face? That’s precisely what the 4.0-liter twin-turbocharged V8 powerplant delivers: a stifling sense of speed. That marvelous engine, shared with Audi's S8 Plus, is good for 572 horsepower and 516 lb.-ft, of torque—though when you’re flogging it, the Conti senses your urgency and boosts output to 592 ponies and 553 lb.-ft, of twist for up to 15 seconds. That enables staggering acceleration specs for a car that, while technically the “lightweight” version, tips the scales at 4,919 pounds. The GT3-R will scream to 60 from a standstill in 3.3 seconds, roar past 100 mph in 7.7, and crest 150 mph in 18.5. This isn’t a coupe; it’s a jet. The thrust, which never fades as the tach needle inches towards the 6800 redline, is simultaneously terrifying and exhilarating.

The shifts are blistering and immediate, whether you’re clacking the paddles or letting the ZF-souced automatic handle the affair. All that power is smartly portioned to all four wheels; it's biased 60/40 towards the rear under normal driving, but it’ll shift up to 85 percent of the power to the back tires, helping them stay glued to the asphalt. And I do mean glued. The back end was near impossible to break it loose, even when nailing a 90 degree corner at 45 miles an hour. When Bentley says this is their most uncompromising and focused road car yet, there’s not a trace of hyperbole.

One interesting note is the location of the engine. Given that it’s smaller than the typical Continental W-12, they had some room to maneuver in the bay. The entirety of the block is in front of the front axle. So far forward, the front of the engine is in front of some of the headlight bulbs. Credit Audi for this positioning, though pause before you declare it a detriment. It’s not harder to turn in in the slightest, thanks to some smart torque vectoring via the brake. The computers grab the inside rear wheel’s brake disc and hold just a smidge to help you nose into your next corner. It works so well, you never notice it.

That’s a recurring theme for the GT3-R; everything is flawless. It drives unlike any other Bentley I’ve piloted. It’s nimble in the corners, it’s flingable, it’s absurdly fast no matter what, yet it feels supremely relaxed at speed. It brakes like a champion, thanks to discs seriously the size of toddlers. The front rotors are 16.5-inches, with 8-piston calipers. If you’re railing on it for a prolonged period of time, you’ll notice a bit of fade, but the brakes regenerate fairly quickly.

A few nods to the GT3 race car from whence this monster came include a missing rear seat, carbon fiber everything, racing thrones for driver and passenger, and a fantastically loud exhaust. The noise erupting out of the back is about 98 decibels. For comparison, between 90 and 95 decibels is where sustained exposure results in hearing loss. A subway train 200 feet away is quieter than the GT3-R’s cacophony. But it's a delicious noise. You come to crave those burps, burbles, snorts and farts on the shifts, each successive one increasing your grin slightly.

Because of all of this, people will stare when an incredibly loud, snarly, white blur whizzes past them on the road. And they will occasionally do a U-turn and follow you, as one gentleman in a bright yellow Chevy Cavalier did when I was bombing around back roads in upstate New York. A subtle car, this is not, which perhaps excuses the stickers. If people are going to gawk incredulously, may as well let them know precisely what they’re beholding, right? See—and hear— us drive the GT3-R in the video below: